They Want Us to Call Riverport "Hollywood Casino Amphitheatre" Now, I Guess 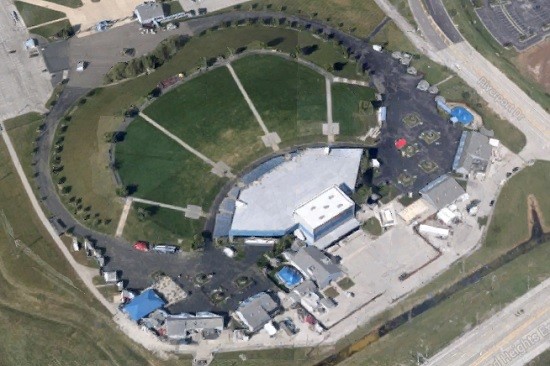 You know that great big outdoor concert venue in Maryland Heights? The one where you're likely to attend the Vans Warped Tour or Pointfest or maybe a three-song-only Kings of Leon show consisting of more bird poop than anticipated? Well, it has once again changed its name.

The Hollywood Casino Amphitheatre, as it is now called, is located at 14141 Riverport (ahem) Drive in Maryland Heights and is also well known as the site of the Guns N' Roses-inspired "Riverport (ahem) Riot" in 1991, just one month after opening as Riverport Amphitheater. Prior to that the space was known as the landfill, where lots of garbage was stored in and on the earth. (According to Riverfront Times calendar editor Paul Friswold, it had a distinct "rotten bologna" smell during this time, and did not play host to many bands.)

Footage of Axl Rose having himself a fussy little tantrum at St. Louis' then-new Riverport Amphitheater.

After a decade or so, everyone seemed to realize that there is neither a river nor a port of any kind in the immediate vicinity of the venue, so from 2002 until 2006 it was dubbed the UMB Bank Pavilion. For you acronym fanatics out there, that did indeed make the venue's name the "United Missouri Bank Bank Pavilion." No one seemed to notice the strange wording technicality, or the fact that a place with the word "bank" in its name twice had no vault and wouldn't cash my paychecks. Everyone just kept calling the place "Riverport" anyway.

In 2006, Verizon Wireless stepped in and re-dubbed the venue -- you guessed it -- the Verizon Wireless Amphitheater. I don't have a snappy quip about that, but regardless, everyone still kept calling it "Riverport."

Until yesterday, when everything changed.

From a press release:

"This relationship with our next-door neighbor allows us to deepen our roots in the St. Louis region, further committing and connecting to the customers we serve," said Hollywood Casino general manager, Todd George. "The cooperative marketing opportunities with Live Nation via the venue are so huge, we jumped at the chance to be part of the amphitheatre experience. This just makes sense in so many ways."

"We couldn't be happier to enter into this marketing relationship with the Hollywood Casino at our premier live entertainment venue in St. Louis," said Dave Gerardi, president of Live Nation Midwest. "Their physical proximity, entrepreneurial spirit and positive synergies make this sponsorship alliance a great fit, enabling them to reach, engage and connect with live music fans at our venue."

Sure, the marketing relationship does sound really special, and the positive synergies of this sponsorship alliance are super exciting, but what I'm really looking forward to are the slot machines and craps tables I can only assume will soon blanket the entire lawn section of the venue. [UPDATE: I've just been told there won't be an open-air gambling market. What kind of "Casino Amphitheatre" is this?!]

But will the classy new moniker and close proximity to its gambling namesake finally stop the people of St. Louis from calling it "Riverport"? Frankly, we wouldn't bet on it.