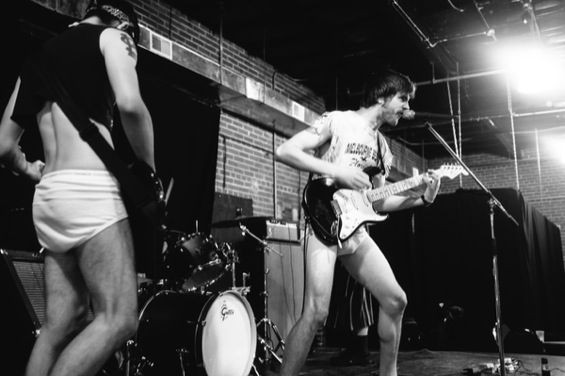 "We've always been considered a gay Cheers," says Chuck, bartender and manager of Bad Dog Bar & Grill. Located at the corner of Vandeventer and Chouteau in the Grove, the beloved clubhouse has a warm, communal vibe. Bad Dog is known for hosting many niche events in the LGBT community, but also the occasional punk-rock show -- an oddity for bars of its type.

"Not everyone gets to go out on a high note," says chef Christopher "Tyger" Roth. Besides running Bad Dog's kitchen, Roth also handles promotion for the bar -- no small feat for a place that hosts huge shows like Mr. Midwest Leather and the International Puppy Contest. (Fair warning: There are no actual canines involved.) The club will cease operation at 3 a.m. on January 1 following its 2nd New Year's Eve Fetish Ball, which also doubles as the establishment's farewell bash.

That high note he mentions is the fact that the two owners, Jim and Bob, will be retiring, and every employee will be leaving with full pay. The decision was made on December 7, nearly one month ahead of closing time. Such advance notice is rare in the industry, and most staff members already have new prospects to look forward to. Roth mentions the possibility of new owners taking over the bar, but no agreements have been made at this time.

Bad Dog first opened in 2004 as a tiny bar in midtown, located directly across from what's now known as the site of the future IKEA. Within the first five years, the club found its niche: catering to the fringe of the LGBT community.

"We saw the need for a lot of groups that just really didn't have a place to go," Roth says, speaking on Bad Dog's move to its current, much larger location. "We wanted to provide them with a safe space where they could come here and do concerts and gatherings. They don't have anybody making judgement on them or making fun of them. They just come and have a good time."

Since its move in 2009, the bar expanded into a multipurpose space. The main room, side bar and stage are all interconnected and filled with the typical club amenities: dartboards, games and TVs blaring sports shows. The attached warehouse was recently remodeled and invokes the hip aura of a downtown club.

While Bad Dog appeals to niche segments of the LGBT community, that focus contributed to the lack of business on a wider scale. "Lots of people love this bar. They might want to come here, but they'll go where their friends go, and it might be a more mainstream place," Roth says.

Roth attributes the recent drop in business to the current state of unrest throughout St. Louis following the grand jury's decision in the Ferguson police shooting of Michael Brown. Recent changes from ASCAP regarding event music licensing will make it difficult for Bad Dog to operate its club space in 2015.

"The financial climate is not that great. It's really tough for a business that lives on bodies in the door every night when your regular customers can only make it out once or twice a month," Roth says OF common problems plaguing the industry.

Roth will be moving to Lindner's Pub (2925 Mount Pleasant Street; 314-351-0425) in January where he'll run the kitchen. He feels optimistic about the future but knows that he, like many others, will miss Bad Dog.

"I'm excited to see all the changes in the world, but some of the changes aren't necessarily what we want them to be."

A side note: After stopping by Bad Dog last night, I sat at a small table at the back of the bar to collect my notes. A couple approached and naturally asked what my notebook was for, so I obliged. Come to find out, I happened to walk right in on the same night as a Gateway Burners meet-and-greet. That's the St. Louis Area Regional Chapter of Burning Man, if you didn't know. (And I didn't know, duh). "We don't know where we're moving," she said, the words leaking out under an audible sigh.

I knew that Bad Dog was a lot more than "another gay bar" to many people, but that moment clearly showed the hole that its closure will leave in the community.