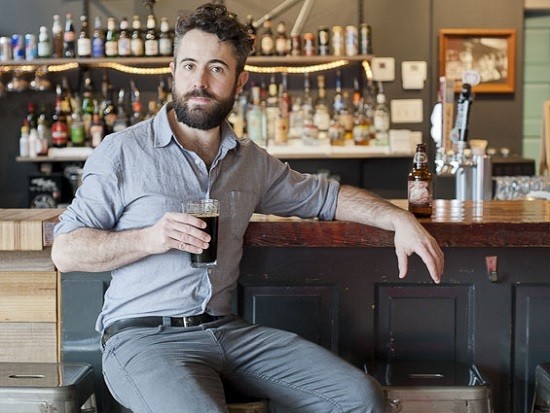 Mic Boshans is many things to St. Louis. He's a musician, a barista, a promoter and, as of November 1, an entrepreneur. Foam Coffee & Beer, located at the corner of South Jefferson Avenue and Cherokee Street, is undergoing a makeover with Boshans at the helm.

"It is nerve-wracking," says Boshans, just before downing a double espresso from his own bar. "This isn't something I'd ever really wanted to do -- I'm a musician first. But when it came down to Foam about to close its doors if I didn't grab the reins, I decided I was going to take the plunge and do this."

Since opening in 2009, Foam has established itself as a place to see a decent lineup of bands playing to modest, sometimes altogether absent, crowds. Boshans started booking a couple of years ago with some specific changes in mind.

"I took over because bands were asking to play and Mike [Glodeck, former owner] was booking them, but had no idea how to do it," he explains. "So a touring band would play here to nobody and not have any local support. When I heard he was going to close the doors, I convinced him to let me take a crack at it."

As the new owner, Boshans is staying true to Foam's original concept -- it's just been slightly rearranged. The coffeehouse portion of Foam's character will not been abandoned. In fact, Boshans has stepped up the game while simultaneously supporting his friends' business.

"We've started carrying [Maplewood-based] Arthouse Coffee," he says. "It's nice to be able to buy coffee from friends who are also musicians that I've worked with in many capacities prior -- Chris Phillips [Bear Hive], Jordan Howe [Bo and the Locomotive], to name a few."

While a lot of the new plan involves changing small touches behind the bar, including the addition of select tequilas, signature drinks and a widened local-beer selection, Boshans intends to focus heavily on the venue aspect of the business.

"I've been floored by the kind of bands we've been able to get here," he says. "Phil Elverum, one of my indie-rock heroes; incredible bands that I've never heard of; and then a lot of people associated with bigger bands. Like somebody from the Hold Steady, someone from Man Man, somebody from Chumbawumba.... We get a lot of cool side projects through here."

"Word is getting out to touring bands all over the country, and even outside the country, that this is a cool spot to play," Boshans reasons. "Part of it has to do with all this hype around Cherokee Street, I suppose. I feel like we're in a prime location. Now I'm just working on the identity of Foam to be a proper music venue first, then a bar, then a coffee shop."

"A lot of comedians are sick of the Funny Bone and digging on a more intimate space," he says. "These folks are working really hard for no money." Boshans intends to incorporate comedy into a good portion of Foam's regular events in an effort to showcase another local entertainment resource.

"Something I intend to continue booking regularly is a monthly show called Sorry, Please Continue," he explains. "It involves someone getting on the stage and telling a story while three comedians sit on the blue couch and continuously make fun and interrupt." Boshans has worked with local comedians such as Kelsey McClure and Mary Mack, and he also has plans to nail down some national acts.

"Foam has a great, laid-back vibe. It's an event-driven space, but I want to have a space that has an identity outside of that," Boshans says. "When there's not a band, there will still be a DJ and a well-stocked bar. So you have different options than you do at other places."

Along with plans for a regular local record spin, he's planning to dedicate a portion of the space in the back of the house to records -- local artists and touring bands will have the opportunity to have their music available for sale there, if they so choose.

"I want to keep doing all the things that Foam was doing before, but do them better," Boshans says. "I am humbled by the amount of support this community has offered. I knew I had a lot of friends here, but I'm truly taken aback by how willing people are to help."

When asked what can be done to contribute to the development of the venue, Boshans says, simply, "Come to Foam. Come hang out, drink things, play shows. That's really the main thing."