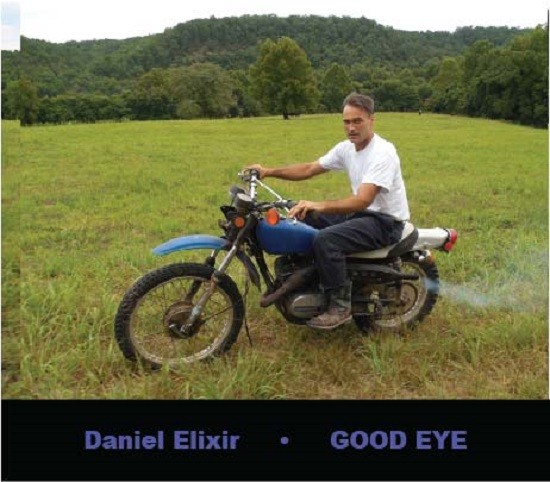 There's a sweet, if slightly naïve, charm to Daniel Elixir's songs. That might be because music isn't exactly his primary or even secondary outlet; after working as an illustrator for such august publications as the New Yorker and the New York Review of Books, he moved to the Ozark hills in southern Missouri to raise organic produce and grass-fed beef.

As a guitarist and especially as a songwriter, he's playful but not a novice, even if Good Eye is far from polished. Tempos on these songs are mere suggestions and not rigorously adhered to, and some of Elixir's guest musicians on these largely solo songs appear to be white-knuckling their way through a few passages. Even the piped-in drum machines on the just-funky-enough "Clown Car" can't corral the guitar's strums. The good thing is that none of this matters -- the shambling nature of the recordings is a big part of the appeal, and Elixir's warm, sturdy voice is an idiosyncratic guide through these eleven tracks.

Elixir's songwriting style is a little hard to pin down -- at times he veers toward kid-friendly pop (on "(Not a) Hippopotamus"), or dabbles in jammy campfire folk-rock ("Saved by Love") or gets on his soapbox (the anti-pollution indictment "Aliens"). His goofy streak is present much of the time, particularly on the Star Trek-on-the-beach fever dream "Honolulu," which features some fine banjo picking from Eric Tumminia, who normally provides drum and bass on these tracks.

That bizarro sense of humor is matched by Elixir's inherent sweetness with the set's standout track "Old Folks Home," his take on "When I'm 64" that pairs a light shuffle with some nice accordion work. The simple, stripped-down style of the recordings recalls Daniel Johnston or early Mountain Goats releases in places, and when Elixir kicks his voice into a higher register, he echoes some of John Darnielle's nasally passion. It's unclear if Elixir ever takes his show on the road and gigs around the state, but these little transmissions from tiny Brixey are as satisfying as his homegrown harvest.

Elixir has uploaded three of the album's songs to his YouTube channel; check them out below and purchase Good Eye here.