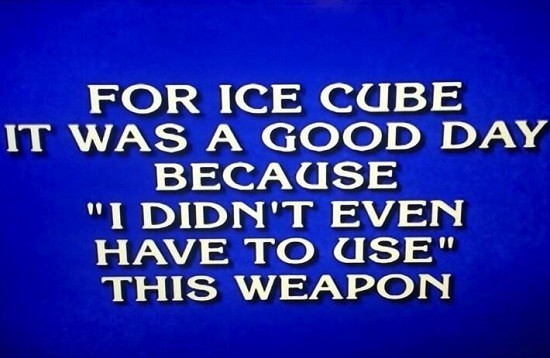 Jeopardy has a long and rich history of taking stuff that's cool and sexy and For The Kids and making it sound extraordinarily awkward and sanitized and, rather ironically, really damn stupid. With that simple premise in mind, here are some of our favorite musical moments from the show's history.

5. We're guessing a student intern was responsible for this. In 2012, Jeopardy reduced much-lauded emotive indie quintet Fleet Foxes to "folk-rockin' dudes" with this clue. To celebrate, Sub Pop Records tweeted a link to the incident and hashtagged "Trebek!" for good measure.

4. 'The 1990s Rap Song' In a particularly delightful episode of Jeopardy: The Battle of the Decades, there was, rather magically, a category titled "The 1990s Rap Song." The questions -- er, answers -- included clues relating to Notorious B.I.G., Shock G and MC Hammer, but it was Trebek's enthusiastic renditions of Cypress Hill's "Insane in the Brain" and Beastie Boys' "Sabotage" that truly made this a special moment in TV game show history. This is possibly the most animated we've ever heard him.

3. Who Is Buddy Holly? Sometimes, under pressure, contestants do crazy things on Jeopardy. One time, a guy actually ended up face-down, passed out, during Final Jeopardy, and another lady got laughed at super-hard by the audience for giving "Chris Farley" as a response to a Johnny Cash clue. However, it's difficult to imagine how one woman, in response to the clue "His widow Maria Elena and actor Gary Busey were on hand when his star was dedicated outside Capitol Records in 2011," came up with "Who Ice T," but sure enough, it happened.

We hope that when someone finally makes a movie about Ice-T, Gary Busey is allowed to at least audition. We would pay to see that.

2. Most Bizarre Clue Ever We're pretty sure you could put this in front of every single member of Mötley Crüe and even they wouldn't answer it correctly. Who the hell came up with this?

1. 'It's a Rap' Plucky contestant Mary holds her shit together really, really well until the very last moment of tackling the "It's a Rap" category. What sends her over the edge? Trebek doing Public Enemy, that's what. "I don't know why that's making you laugh so much!" the host declares. We think you do, Trebek. We think you do...