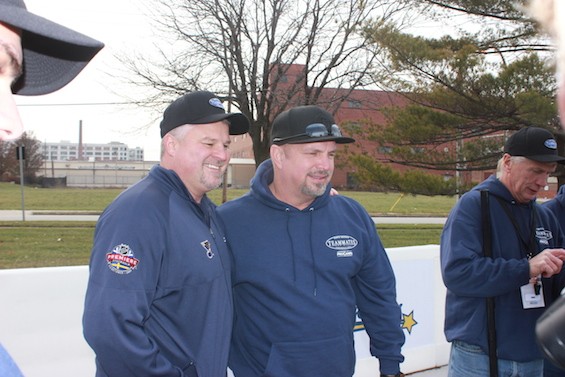 Do country music and hockey mix? The former conjures up images of cowboy hats and tractors, while the latter brings to mind mouthguards and Blur's "Song 2." These aren't exactly related interests.

But in St. Louis, anything goes, especially when there's an opportunity to help local kids. That's how country megastar Garth Brooks and a bevy of St. Louis Blues players got together to bring hockey to children at the Mathews-Dickey Boys and Girls Club in north St. Louis.

Getting out of his hotel room before his fourth sold-out show at Scottrade Center on December 7, Brooks met up with current Blues defenseman Barret Jackman, Hall of Famer Brett Hull, former team stalwarts Kelly Chase, Bobby Plager and others to coach a few rounds of youth hockey at the Mathews-Dickey outdoor rink. Brooks' Teammates for Kids foundation provides scholarships for children to attend ProCamps sports camps that are hosted by professional athletes in all disciplines.

"Even though my name might be on the sign, I'm the same exact piece of the pie as these guys [the Blues players] are," Brooks told media at the event. "These guys, they love children. So I'm just real proud to be part of it."

Brooks is coordinating a Teammates ProCamp in each city on his world tour, which kicked off in Chicago on September 4. The country star's visit to St. Louis coincided with unrest and discussion after a grand jury recently decided not to indict Ferguson police officer Darren Wilson fatally shot eighteen-year-old Michael Brown, but Brooks said nothing could have stopped him from putting the clinic on.

Smiling and clapping from the rink wall, Brooks watched dozens of kids show off their hockey skills under the tutelage of the Blues players and later gave shoutouts to the girls for competing as hard as the boys and singling one youngster out for her goalie expertise.

"Watch out for this one," Brooks said. "I think she only let one shot slip by."

Judging by their tweets, the Blues players seemed to love the event as much as Brooks did:

Had a great time with Garth Brooks at Mathews-Dickey to support Teammates for Kids. pic.twitter.com/Omzg0b39Uk

Honored to support @teammates4kids and see a once in a lifetime show by @garthbrooks #peoplelovingpeople pic.twitter.com/9zia4P177X

We had a great day today with @garthbrooks & @teammates4kids at Mathew Dickey's boys and girls club. pic.twitter.com/sOZfEcvVUY

Brooks even donned a Blues jersey during Sunday's performance:

Just don't ask Brooks to wear skates himself. While he said he's a hockey fan, he also admitted that he's "just not much of a player."

"It just doesn't make any kind of physics for this big ass to be on skates," Brooks laughed.

On page two, see photos of Brooks and the Blues players hanging with the kids! 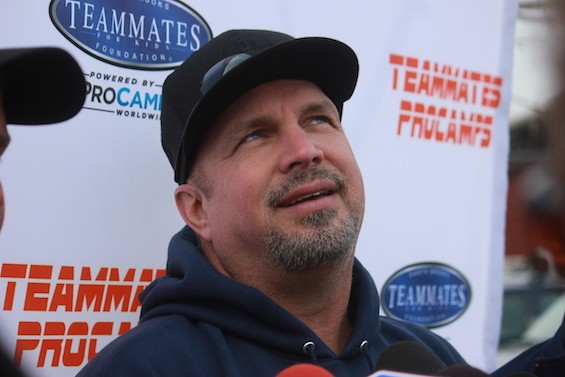 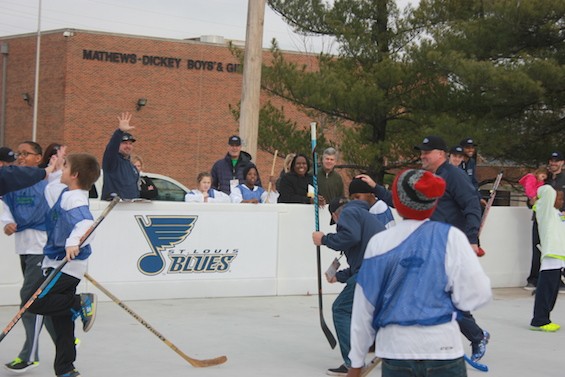 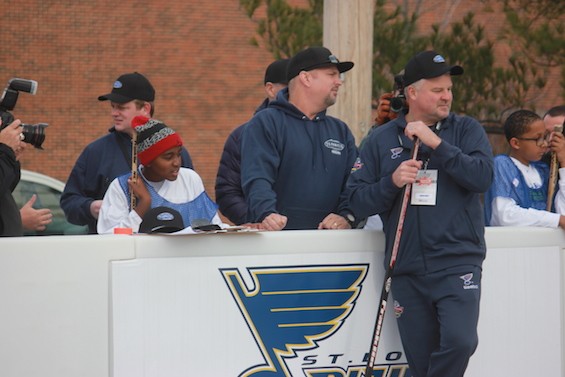