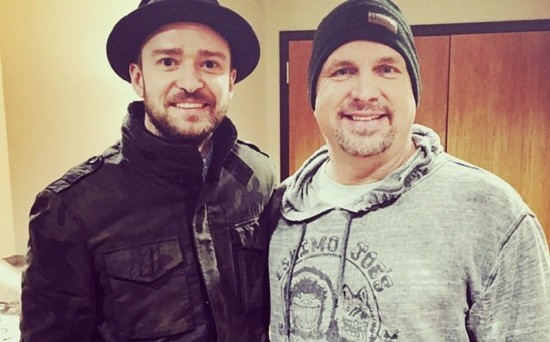 We already knew that country megastar Garth Brooks had friends in low places, but we were surprised to learn last night that Justin Timberlake was among them.

Fans spotted the "Suit & Tie" singer getting his country groove on during Brooks' concert at Scottrade Center on December 4 -- the first of four shows Brooks has scheduled for St. Louis. But the cool thing, our readers excitedly tweeted, was that Timberlake enjoyed the concert from the seats, not from the stage.

In the latest edition of "Celebrities: They're just like us!" tweeps shared their surprise once they realized that pop royalty was just a few rows away from the man that Billboard named the best-selling artist of the last two decades -- and from themselves:

Concertgoers also remarked on Timberlake's obvious enjoyment of Brooks' on-stage antics and music, which included hits such as "The Dance" and "If Tomorrow Never Comes" plus songs from his November 11 album Man Against Machine:

Pretty awesome when Justin Timberlake comes to a Garth Show, Sits on the front row and sings every song!

So not only was the Garth Brooks show sweet but @jtimberlake was there. I saw him rocking out to "Friends in Low Places" and it was great.

Timberlake performed in Dallas on December 3 and is scheduled for an Oklahoma City show on December 5, so we're guessing that the former Mouseketeer simply decided catching Brooks' show in St. Louis was worth using up an off day. And Timberlake and Brooks may not have performed together, but they're part of the Mutual Admirers' Club, as Mr. Sexyback later posted to Instagram:

One of my IDOLS. Garth... You are a MASTER of your craft. I am in awe of you, still.

Brooks has been a hero to Timberlake for quite a while, as evidenced by this video of JT performing Brooks' "Two of a Kind" in a Memphis talent competition:

Riverfront Times photographer Steve Truesdell was at the show, so stay tuned for performance photos later this morning! Brooks will perform nightly at Scottrade Center through December 7. Ticket info here.

Update 11:55 a.m. December 5- Our photos are up! See our full slideshow here, or click over to the next page

Here are just a few photos from Garth Brooks' energetic performance at Scottrade Center. Check them out below, and then head to our slideshow for more!