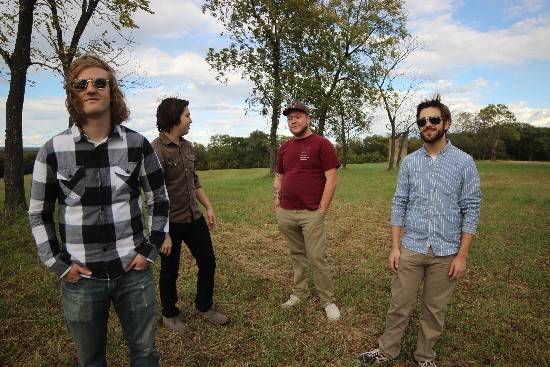 "I have to hold myself at the same standards I hold any other writer or musician to, or I'm just cheating myself, " says vocalist Kory Meyer, the songwriter behind the Langaleers. When Meyer hears a song, he can't help but analyze it and pick the pieces apart. He takes the common elements between his favorite bands and drives the Langaleers with memorable riffs -- the kind that get stuck to your inner ear.

Based in Festus, Meyer started several short-lived bands with his high school circle of friends, including Early Morning Fire -- a trio that played in and around St. Louis. After that band dissolved, Meyer formed the Langaleers as an outlet for his own songs that had sat unused. And the name? A reference to the Stephen King novella "The Langoliers."

"We asked our friend Kyle what we should name the band, and he remembered the name of this B-grade Stephen King movie. I was getting really impatient and wanted to start booking shows, so I was ready to pick a name and move on. We changed the spelling so people would be able to search for our band on the Internet and not just come up with this movie," Meyer remarks.

Fueled by lust for '60s rock, the band plays within the framework of its forefathers. Elements of Americana are present and given ample space to breathe by tasteful drumming. There are no boisterous fills here, only a solid rhythm section set to drive refined riffs. The guitars are made crunchy through a meager bit of distortion -- too much and the band would invoke a different feel altogether.

The Langaleers released its first studio effort this past July, a self-titled full-length album. Meyer was involved with organizing a festival around the same time, so the band rushed the record in order to beat the fest's deadline. Ultimately Meyer never sought label support for the album, but he remains humble, viewing the ordeal as learning experience.

"It was good way to learn what actually needs to be done to have a successful release. It's just a shame we couldn't have made this release a bigger deal," Meyer adds. He plans to support the album by touring, but first he wants to submit the music to as many radio stations as possible.

Follow through as Meyer and his bandmates talk influences, favorite bands and lamenting the loss of their favorite venue. Kory Meyer, vocals and rhythm guitar

My favorite aspect of being in a band is... Playing shows is definitely the best part. We get to show off all the work we have put into practicing and writing.

I've learned the most from... Musically, I have learned the most from my guitar instructors. Bill West first got me into guitar and taught me most of what I know. I've been teaching with Jason Fowler for a little over a year, and that helps push me to be a better musician all the time. It's a real honor to have learned from these guys. I've also had a lot of help from Matt Basler. He's helped us out with getting our album done, taking photos for us and making out merch. He's also given me a lot of tips on how to progress the band.

I'm most inspired by... Anyone who works hard at anything without fear of failure. You won't get anywhere with anything if you aren't willing to sacrifice and take risks. I'm lucky to know a lot of people that do that very thing.

What I like most about St. Louis is... All of the extremely talented musicians and the people that support them.

Some of my favorite local bands are... Tok, Rum Drum Ramblers, the Hooten Hallers, the Thin Dimes, Boreal Hills, the Maness Brothers, King James and the Killer Bee, and Kenshiros.

The St. Louis music scene could use... A bunch of rich assholes to blow a bunch of money on all of the great local bands so they can make a living off of doing what they love. Also, someone to buy and reopen Lemmons.

The best post-show food in St. Louis is... If I feel like splurging I will go get some French toast from the City Diner. Most of the time it's a cheap bowl of cereal in the comfort of my own home.

My favorite aspect of being in a band is... Sometimes we get some pizza and drinks when we play shows. And the thrill of wondering if my equipment will be stolen every show.

I've learned the most from... Playing with other people and listening to as much music as possible have both taught me way more than any instructional methods I've tried.

I'm most inspired by... Nothing makes me want to play music like watching other people play music.

What I like most about St. Louis is... St. Louis makes damn good beer. Sometimes they give it to bands. Sometimes with pizza!

Some of my favorite local bands are... Tok is cool. I like Sleepy Kitty. I think Bruiser Queen is pretty neat, so is King James and the Killer Bee. Old Capital Square Dance Club has cool songs. Also, I'm pretty sure everything Big Muddy Records has ever released is perfect.

My favorite aspect of being in a band is... Getting to play music with my friends and seeing people react to it. Nothing cooler than seeing someone dancing or singing along at a show.

I've learned the most from... My friends/bandmates have taught me a lot. I started playing shows when I was twelve and have been in a ton of bands since then. Some stuff has just kind of clicked along the way.

I'm most inspired by... If I had to list who or what inspires me as a musician I would be here all day. Overall, I am most inspired by my friends and family. Anything or anyone that makes me feel strong emotion really.

What I like most about St. Louis is... Driving around the city discovering all of these awesome little businesses. Bars, restaurants, comedy clubs. There's a lot to do if you know the right places.

Some of my favorite local bands are... Tok rules. Scene of Irony is really awesome. I also really dig the Rum Drum Ramblers.

The St. Louis music scene could use... A larger following. There are so many good artists in this city who need to be discovered.

The best post-show food in St. Louis is... Guerilla Street Food. Hands down. You just gotta catch them when the truck is in business.

My favorite aspect of being in a band is... The satisfaction of your hard work and hours of practice paying off. It's really awesome to hear songs coming together and starting to groove more and more. It's also cool getting paid for doing what you love, even if it's not much.

I've learned the most from... Musically, I'd say I've grown the most from just playing with more experienced musicians. I've been playing drums for about ten years now, and I've been fortunate enough to always have had friends who were very skilled musicians.

I'm most inspired by... My friends are probably my biggest influences/inspirations. I grew up playing music with my close friends, and I've really grown a lot as a musician from that. Prior to joining the Langaleers, it'd been a few months since I had played drums and the guys really inspired me to start playing again. I also really dig Bruce Lee.

What I like most about St. Louis is... The diverse and awesome people and all of the things to do. We usually meet some really awesome people at our shows no matter which venue or what band we're playing with.

Some of my favorite local bands are... I really like So Many Dynamos, though I'm not sure if they're still playing shows. Tok is also really awesome, and the Baslers are probably some of the funniest and strangest people I've ever met.

The St. Louis music scene could use... More venues with free pizza buffets. There has been a void in my soul ever since Lemmons closed.

The best post-show food in St. Louis is... Strange Donuts. I just can't stop eating them. Though, the BP slinger from the Benton Park Cafe is also one of my favorite things in the world.