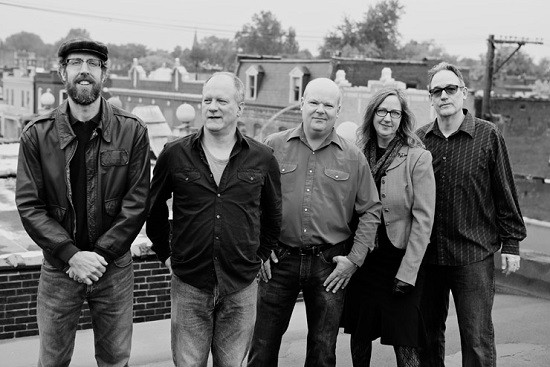 Christmas music can elicit a range of responses: Doe-eyed sing-alongs and nostalgic reveries are both understandable responses, but there are many listeners who see red at the first strains of "Jingle Bells."

The long-running quintet is, bar none, St. Louis' most prolific maker of Yuletide merriment. With this year's Lit Up Like a Christmas Tree, the band has now released two albums of mostly original Christmas music. The new album (and 2009's Just Because It Was Christmas), taken alongside the band's annual, pageantlike holiday shows, suggests a quiet revolution to reclaim the season's music away from too much treacle and sleigh bells.

In a conversation a few weeks before its Christmas concert, the band -- founding members John Wendland, Andy Ploof and Anne Tkach, along with drummer Spencer Marquart and keyboardist Jon Parsons -- talked about, as Wendland understates, their "affinity for Christmas music."

"I really like the way a lot of the old bands would put a lot more time into the [Christmas] albums," Wendland says. "They sound more crafted, like they put a lot more care into them. That's the approach we tried to take with it. I love the way, like, when you hear a Jackson 5 Christmas song, it sounds as good as any of their other Motown songs."

To that end, the band spent time early in 2014 putting Lit Up together, recording at Jason McEntire's Sawhorse Recording Studios and working with many regular guests from past Christmas concerts. Ransom Note's Merv Schrock drops two syrupy, soulful originals, and vocalist Steve Carosello of the Love Experts takes the lead on a few spare and subtle tracks.

What you won't hear is the umpteenth version of "Silent Night" or any other holiday standard. That's partly because Ploof and Wendland have a seeming wellspring of tunes befitting this time of year, but Ploof explained the band's desire to dig a little deeper for the project.

"With the well-known ones," says Ploof, "it's hard to be inspired by them because you've heard them so much. It doesn't hit you anymore. John knows a lot of music and has a lot of Christmas music, so he hears a lot of the out-of-the-way music for Christmas. It's a new point of view for Christmas, and it kind of gets you enthused again."

Wendland, who hosts the KDHX (88.1 FM) program Memphis to Manchester on Thursday mornings, is a noted collector of holiday music. Along with fellow KDHX DJ (and Riverfront Times contributor) Roy Kasten, Wendland curates the annual K-YULE compilation for family and friends, unearthing the long-forgotten holiday songs -- the kind you'll never hear on those ghastly 24-hour Christmas stations. His crate-digging has bled into many of the covers that Rough Shop has performed.

"I get a perverse amount of pleasure in all these songs that we think should be huge, like Marvin Gaye's 'Purple Snowflakes,'" says Wendland. "The people that come to our shows every year think of those as Christmas classics. If we've done that, we've done our job."

One such chestnut that Rough Shop has presented on this year's album is "North St. Grande," a song originally written and performed by the British band Stackridge. Told from the perspective of a soldier serving overseas, the song speaks of isolation from family but hopes for a brighter day come Christmas. It has become one of Tkach's favorite songs to play.

"'North St. Grande' really hit me when we started playing it," says Tkach. "It's a song that is evocative of feelings that we're having throughout the year anyway, that we're in this really desperate place, that people are at war and you're far away from your loved ones. That song makes me cry every time we play it, and I don't like Christmas music," she laughs.

That depth of feeling that Tkach speaks of appears throughout Lit Up, and many of the most affecting tracks aren't exactly of the holly, jolly variety. A good number of them center on the hardships that accompany the holidays -- the hangovers, hang-ups and hellish car trips that are often part and parcel of the Christmas experience. Wendland's "Snowbound Girl" speaks to that experience of holiday overload.

"Sometimes you feel overwhelmed that time of year, and that kind of started out the song, but you try to look at things with a little bit of hope as well," says Wendland. "You hope some of that creeps in, to make it not so bleak."

Whatever notes of bleakness that do find their way in are quickly leavened not only by a prevailing spirit of bonhomie but by the varied styles of American music that Rough Shop is able to work through. While Rough Shop is nominally a folk/Americana band, Lit Up finds the group (and its guests) working through light, organ-fired jazz ("Santa, What You Got in the Bag?"), '60s soul (on the Parsons/Tkach remake of Little Eva's "I Wish You a Merry Christmas") and after-hours piano balladry (the Carosello-sung "Sick Again").

These styles and more will be cycled through at this weekend's Christmas show at Off Broadway, which will feature Rough Shop and its many guest musicians. What began as a one-off during Ploof and Wendland's time in their previous band One Fell Swoop has grown to stage-filling proportions.

"We have all these different combinations of people who never sing together, and that I just absolutely love," says Wendland.

Tkach looks at Rough Shop's Christmas shows and records as less about the season itself and more reflective of the bond that is formed through their music.

"Is it Rudolph the Red-Nosed Reindeer where that's the Christmas special where they go to the land of misfit toys?" Tkach asks. "I kind of feel that way about this group of people. In the core of the band, none of us have any kids. Christmas isn't about that for us. I always feel like I'm in the land of the misfit toys at Rough Shop Christmas. It's what we create together -- we're not doing it because somebody's telling us to do it, or because of the commercialism is out there -- we're doing it because we need family during Christmas too, and this is how we create that."