The Best Music Photos from November 2014 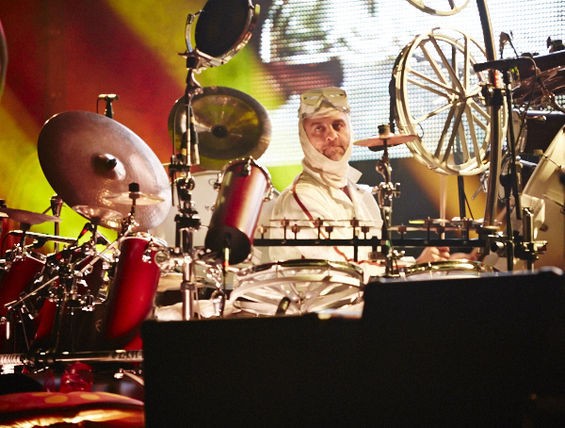 Plenty of concerts and music-related events happen in St. Louis every night, and we try to photograph as many of them as we can. Each month, we'll look back at photos from the previous month's batch of concert photography and hook you up with a bunch of shots you may have missed. Below, check out our favorite music moments from October 2014, in no particular order.

Run the Jewels arrived in St. Louis on the same night St. Louis County Prosecutor Bob McCulloch announced the grand jury's decision not to indict Ferguson officer Darren Wilson for fatally shooting Michael Brown. That announcement prompted Killer Mike to make what has got to be one of the most passionate, tearful speeches ever from a musician about social justice. Read our review of the show here.

We wanted a golden egg-laying goose, and by golly, we got one, thanks to Primus. Les Claypool and friends transformed Peabody Opera House into a Wonka wonderland filled with candy, trippy lights and Oompa-Loompas. Read our interview with Claypool here.

What, you've never seen cosplayers do the "YMCA?" The Anime St. Louis crowd happily boogied down to that and more during its Year's End Ball, which celebrated art and collected donations for the Collinsville Area Food Pantry.

St. Louis got a little taste of New Orleans during the Cherokee Street Jazz Crawl. Part of the Nevermore Jazz Ball & St. Louis Swing Dance Festival, the crawl featured an outdoor romp with musicians and dancers of every style.

Anberlin said farewell to St. Louis fans as the group continued its final tour before calling it quits. But one of the coolest moments of the evening was when St. Louis-based Greek Fire vocalist Philip Sneed sported an Anberlin shirt and congratulated his grandparents -- who were in the audience -- on their anniversary.

It's not everyday you see C-3P0 strum a guitar, but the Randy Dandies have always been about serving up the unexpected. In "Serentitty," Ol' Goldenrod was part of the Dandies' burlesque tribute to sci-fi favorites like Star Wars, Firefly and Futurama.

We said our goodbyes to the Shanti, that Soulard staple that welcomed Grateful Dead-inspired bands with open arms and open bottles since 1999. Appropriately, the Schwag helped close the bar's run, reminding us what a long, strange trip it's been. Read more about the Shanti's final night here.

The New Pornographers made a much-anticipated stop in St. Louis, delighting fans by featuring both Neko Case and Kathryn Calder alongside A.C. Newman and the gang. Read our interview with show opener the Pains of Being Pure at Heart here.

On page three, our favorite pin about a boner, ever.

Ok, this shot from the Old School Tattoo Expo isn't technically a music photo, but many musicians have tattoos and this guy might play an instrument or something, so we're leaving it in. Besides, the "I have a boner" pin makes us giddy.

Sorry, Shaggy, you can't say, "It wasn't me." Mr. Boombastic delighted his audience with plenty of air humps and Jamaican beats after starting a bit late due to tour bus problems.

After years of touring and the theft of their van, it's no wonder members of Kentucky Knife Fight were finally ready to hang it up. The beloved local band will be missed, though. Read our interview with the band here.

Fans of house and dance music like to kick things up a couple of notches -- a notion that was on display during RL Grime's set at Old Rock House. From furry ears to neon hot pants, audience members were as fashionable as the music was. Read our interview with RL Grime here.