That Time the St. Louis Symphony Dressed Like a Motorcycle Gang: Photos 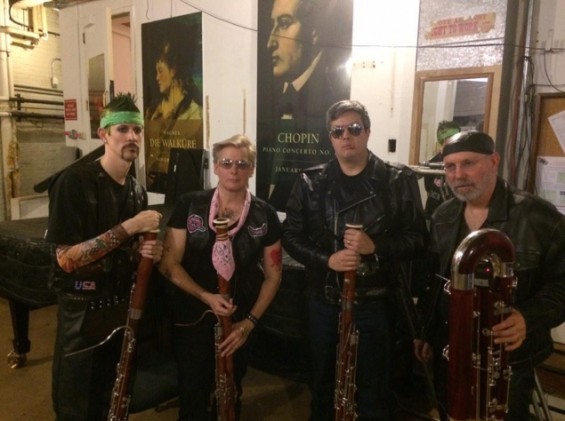 Thanks to pop culture, we're all familiar with plenty of weird motorcycle gangs, like the demons that ripped apart the Buffybot or the macho guys who became Pee-wee Herman's best friends after a little "Tequila."

But an orchestra's bassoon players wearing leather chaps and acting like badasses? Really?

But that's exactly what happened during the St. Louis Symphony's "Rhapsody in Blue" performances over the weekend. Four members of the symphony's bassoon section took their parts in composer Michael Daugherty's piece "Hell's Angels" a bit too literally, to the delight of SLSO audiences. Watch in this promo video as the musicians set expectations for their newly wild personas:

Relax, your eyes are fine; that, indeed, is a mohawk you see on the musician to the left:

And yes, Andy Gott has a blue mohawk. He also has a cigarette in his mouth. Not lit of course. Hell's Angels. @slso on @stlpublicradio

We had no idea that woodwind players could look so fierce! Luckily, Adam Crane, vice president for external affairs at the St. Louis Symphony, tweeted a few more shots as proof:

I snapped this one backstage last night of Felicia Foland in her motorcycle outfit. Hell's Angels tonight @slso! pic.twitter.com/3lVfF3Pxzh

We absolutely do not want to meet Felicia Foland in a dark alley:

Audiences were into the "Hell's Angels" surprise, giving the bassoon section standing ovations during each performance:

And the biker-bassoonists did just what you'd expect -- they brought alcohol to the party:

A surprising beginning to our concert. Motorcycle gang (bassoon section) stormed into Powell. They handed D-Rob a bottle of Jack Daniels.

That's music director and conductor David Robertson in the middle:

Here are the @SLSO bassoons in their motorcycle outfits. Hell's Angels. @slso on @stlpublicradio pic.twitter.com/XWlRJRE6aU

We're sold! If today's gangs are looking for musicians who can perform Gershwin and Bernstein numbers, then there's a place for us yet.

The St. Louis Symphony's next performance is "The Four Seasons" on December 5 at Powell Hall. We can't guarantee bikers, but between this weekend's black leather and all the orchestra sex that Ben Folds is having, we can't wait to see -- and hear -- what SLSO does next.