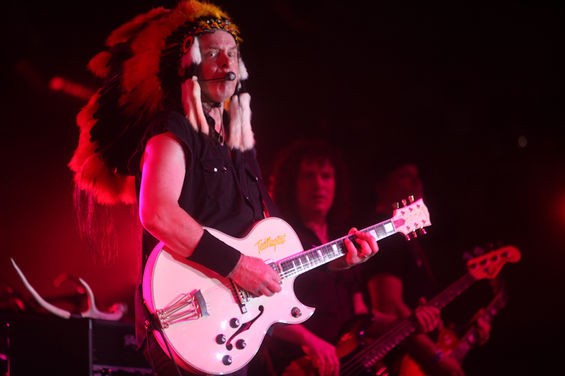 Rocker/NRA board member/terror to all that is furry and mammalian Ted Nugent is once again speaking out about the situation in Ferguson. After penning an essay in October about the "Ferguson thugs" and "plague of black violence that has infested our inner cities," the Nuge doubled down last week following the announcement that Darren Wilson would not be indicted for the killing of Mike Brown.

In a November 24 Facebook post, Nugent outlined his "lessons from Ferguson," including, "Don't let your kids grow up to be thugs who think they can steal, assault and attack cops as a way of life and badge of black (dis)honor. Don't preach your racist bullshit 'no justice no peace' as blabbered by Obama's racist Czar Al Not So Sharpton and their black klansmen."

"Don't claim that 'black lives matter,'" he continues, "when you ignore the millions you abort and slaughter each and every day by other blacks."

We'd guess that his math is probably a bit off, and also point out that his views are generally insane.

For his part, Uncle Ted was so impressed by his own political analysis that he even reposted the exact same thing the next day.

Read the status in full below: