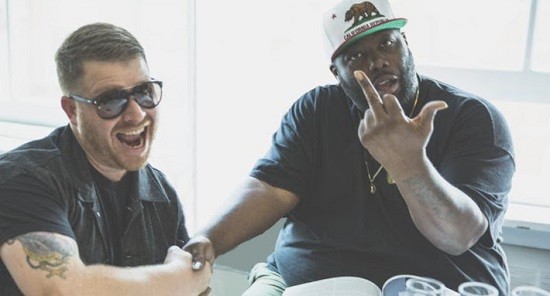 Some matches are made in heaven -- others, like Run The Jewels, are made in the murky, underwater trenches of underground hip-hop. Named after a verse in LL Cool's J "Cheesy Rat Blues," RTJ swerves like a great white shark -- sleek as hell, just don't get caught in those teeth.

This isn't the first time El-P and Killer Mike have crushed it together -- El-P was behind Killer Mike's 2012 critically acclaimed album R.A.P. Music, and later that year, Mr. Killer appeared on the track "Tougher Colder Killer" from El-P's Cancer 4 Cure. Forming Run the Jewels was just the natural progression of things.

The duo's self-titled debut topped a number of 2013 year-end fave lists, but the recently released sequel -- featuring Travis Barker, Diane Coffee (of Foxygen fame) and even Zack de la Rocha -- is already proving that Nick Gazin's cover art isn't the only thing about this duo that's iconic. We called the couple up to ask them about some of these partnerships, which they made clear were pretty spontaneous, yet calculated.

"The record just sort of unfolded organically the way it unfolded. I think me and Mike just accepted that we're open to whatever came our way," El-P told us over the phone. "We don't sit down and write a list of people down. Everyone on the record is someone who we had a relationship with or who was around us at the time, who we were inspired by."

One collaborator who didn't get a lot of notice was the late Isaiah "Ikey" Owens, who died mid-October from a heart attack. The keyboardist was best known for his work with the Mars Volta and Jack White, but this wasn't the first time El-P and Ikey produced together. Owens appeared on El-P's 2007 album I'll Sleep When You're Dead on the closing track, "Poisenville Kids No Wins/Reprise (This Must Be Our Time)." On Run the Jewels 2, Ikey also appears on the final track, "Angel Duster," which El-P says was very fitting.

"Any time when anyone dies in their time of their life, it's tragic," El-P says. "I was very, very upset by that, and very honored and very grateful that I got to work with him again, and include him in the project. It means a lot. It turned that whole record into something even more powerful than we felt it was. I'm very sad that he's not around to be able to hear it and be a part of it."

Speaking of collaborations, you might have heard of Meow the Jewels, an upcoming remix of the group's newest album with nothing but cat sounds. So the story goes, the members of Run the Jewels were really stoned when coming up with special packages for preorders of the album -- one of which offered to remake the album with kitty noises for $40,000.

Someone else (presumably also stoned) decided to make a Kickstarter to make this bonkers idea reality. Run the Jewels plans to donate all the money the group makes from this to families of Eric Garner and Mike Brown, two black males who recently died as a result of police violence.

It's no secret that Killer Mike, his father a former police officer, has been vocal about what's been happening in Ferguson and elsewhere around the nation. During the early protests in August, Mike appeared on CNN to voice his concerns -- and he tells us he's still on edge.

"I don't know if the two things are related, but we have an Attorney General [Eric Holder Jr.] resigning in the middle of an investigation that big is definitely a little frightening," Killer Mike says. "I'm hoping for the best, not really expecting it, but more than anything I guess my feelings on it is now that the public is awakened to there being a real abuse of power by police forces nationally -- the public is more watchful and does something to build a better community and police relationships. Like watching the fucking cops."