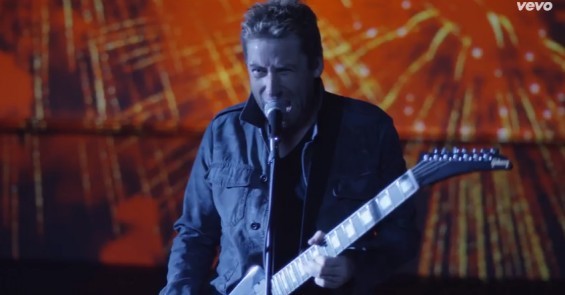 When browsing Teh Interwebz, it's important to adhere to the golden rule: DON'T READ THE COMMENTS. For real, people (including some of you and some of us) just go batshit insane when it comes to spouting their opinions regarding guns, UGG boots, burritos, kitten mittens, rain on a Monday, potholes, Gremlins 2: The New Batch or anything, ever. Trying to parse the logic behind the rhetoric simply rots the brain, so we do not recommend it.

We'll make an exception, though, when it comes to reading comments on stories about Nickelback. While we're still scratching our heads over why Chad Kroeger and friends felt compelled to weigh in on Ferguson issues, we're nonetheless grateful for the band's convictions. Otherwise, we might not have your insightful thoughts about music's place in activism and world affairs.

.@RiverfrontTimes @Nickelback is this real life?

Do you mean, "Is a world in which Nickelback draws strength from discussions about race, sociology and police brutality real life?" In that case, yes, it is, friend. But take heart! Our readers (particularly our Twitter followers) have listened to Nickelback's new Ferguson-inspired song "Edge of a Revolution," taking great pains to dissect the tune's meaning while pondering how it might affect the situation that faces St. Louis -- and many cities worldwide -- in present times.

OK! Do it, Rockapella! First, let's address that pesky question of if what you read this week was actually true:

When @CMartin728 sent me this about #Nickelback writing a song inspired by #Ferguson I thought it was an Onion story http://t.co/u0Rk6qgpvw

Yes, readers: It's real, and it's spectacular. Have a listen:

Actually, we're not sure how spectacular it really is, considering that while we watched, we had the same expression on our faces as the kids in the video did. But maybe you fared better?

@FrightShark trust me when i say it's a "must listen" http://t.co/V5Mat4fOfo

See? It's a "must listen"! Those quotation marks probably don't mean anything.

If you're a masochist and/or you hate yourself, have a listen to Nickelback's song inspired by Ferguson. http://t.co/Rm3Q6MAwwe

Just when you thought Nickelback couldnt get any worse they come out swinging http://t.co/v4rtMWq720

But maybe this Nickelback song isn't that bad?

Some article last week said we should give Nickelback a break & that they aren't really so embarrassing. PROVEN WRONG http://t.co/60qOTUSKUd

Nickelback's Ferguson-inspired song-->http://t.co/KyQuu8GZgH In case u feel like bleeding from the ears while losing all faith in humanity.

It's easy to mock Nickelback. Fun, too. http://t.co/IEpwYDgIvv

OK, OK, we get it. Still, wouldn't you like to know Kroeger's thought process while penning the lyrics?

"This is how you remind me/Of entrenched racial discrimination in our policing systems in this country" http://t.co/8redzSLeL5

That puts things into perspective, certainly. Even if you hate the song, though, doesn't it inspire you to stand with your fellow humans on the front lines of social justice? Or something?

If Kroeger be for us, who can stand against us? "@karabowlin: What? No. STAY OUT OF THIS, NICKELBACK. http://t.co/myPQ4W6Zap"

The sounds of revolution, brought to you by Nickelba...... BAHAHAHA too funny to finish RT @bomani_jones: bruh http://t.co/gKJQvDj9XI

FUCK YEAH! Nickleback is on the scene: http://t.co/LBHijnb8GR #ferguson

good news everyone, all the problems in ferguson are solved because NICKELBACK wrote a song about it. http://t.co/zTrIeLuBxm

Something tells us that those folks are being sarcastic, maybe.

I'm listening to a Nickelback song. About Ferguson. Voluntarily. Shit y'all gotta suffer with me http://t.co/9m31W5teyy

.@fatrobocop on why Nickelback is CRUCIAL in understanding the intricacies of that make the #Ferguson story. http://t.co/P7Rnk9rwFJ

Nickelback saw CNN coverage of Ferguson & thought, "Whoa! Let's do song about revolution." For fun or something. http://t.co/N0vDx5Xvgu

"Y'know, I'm just as surprised as anybody else when something comes out of my mouth." http://t.co/bCcdTfCzhG

not sure you needed me to tell you that Chad Kroeger is an asshole but just in case: http://t.co/SDwEvlKy1R

So we've learned. Still, some people seem to love "Edge of a Revolution."

I, for one, didn't know how much I needed to hear a Nickelback song about Ferguson. http://t.co/89ahKHuqwq

On behalf of all Albertans, I'd like to take this opportunity to apologize for Nickelback. Seriously. http://t.co/cUI4MKlUqp

How the hell did we wind up like this?