If the Funky Butt Brass Band, that six-headed Hydra of spit valves and second-line sweat and Chachere's seasoning, had stuck to its initial goal of bringing New Orleans brass music to St. Louis, that would have been enough. But over six years and four releases, the band has continued to expand its boundaries. That New Orleans shuffle is still at the heart of many of the group's tracks, but its latest full-length, Sugar Sugar Whomp Whomp, is more interested in tugging at the edges of funk, soul and even hip-hop.

A percolating rumble opens the record with a one-two hit of the title track -- a showcase for solos, each brash but tasteful -- and "Funk in the Trunk," a mission statement complete with wah-wah guitar and rapped verses that sound more like G. Love & Special Sauce than anything else. You'll hear some of the band's bread and butter with covers of songs by New Orleans heavyweights Dave Bartholomew and Professor Longhair, but those cuts feel slightly out of step amid the more funk-heavy sound on Sugar Sugar. 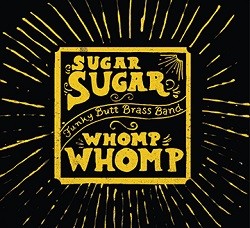 Of course, FBBB has long taken its love of NOLA-bred music and molded it to the contours of our section of the Mississippi, but the effects are more striking on the album's "South Side Suite" than ever before. The four-song set begins with "Down Broadway to the Oyster Bar," as loving a tribute to a local dive that you're likely to find. (And given that trumpeter Adam Hucke was struck by a stray bullet while playing on Broadway Oyster Bar's patio stage this past summer, it's clear the band holds no grudges.) From there, each track takes on a different element of St. Louis with a matching style and tone, from the murky, bottom-heavy hip-hop verses of "South Side Swamp" to the bucolic scenery and Provel and Bud Light Lime ode in "Saint Lou Bliss."

As befitting a group that shares its members liberally with several local acts, some notable guests help fill out these twelve tracks. Keyboardist Dave Grelle adds Meters-worthy organ and Clavinet licks throughout, and Big Mike Aguirre lends his slide guitar later in the album to add a dose of the Delta. No matter what tributary is pulled from, FBBB brings it all back home to baptize its sound in the funk and sweat of St. Louis.

Stream the album in full below, and make sure to stop by the Broadway Oyster Bar this Saturday, November 22, for the release show. 10 p.m. / $6.