The Best Concerts in St. Louis From November 17 to 23

Don't let snowfall ruin your good time. This city has a tendency to panic every time a flake hits the ground, but fret not, the road is still here for those brave enough to venture out for good music. Shaggy and the Urge are just a few highlights for the week ahead, but we want to make a special recommendation for Kentucky Knife Fight's final performance on Saturday at Off Broadway -- this is your last chance to catch one of St. Louis' most underrated bands.

Russian Tsarlag w/ Dan Talbot, Three Kinds of Wildness Monday, November 17 The Revisionist Inn 7 p.m. | $10 By Josh Levi Since the early 2000s, Carlos Gonzalez's Russian Tsarlag project has traversed the astral plane of underground music. What initially started as a mish-mash of lo-fi, dirgy slop-rock has evolved beautifully into a hazy blend of weirdo crooner-pop. With a sound akin to a Beach Boys cassette played backwards and underwater, Russian Tsarlag's strung-together tunes drift in and out like a twisted dream. His work as an illustrator and filmmaker equally informs his music as themes of purgatory, slime, witchcraft and malaise creep throughout each release. As a 21st-century polymath, Gonzalez's genius flies beneath the radar of the mainstream, with a strong following of mutants coming up closely behind. 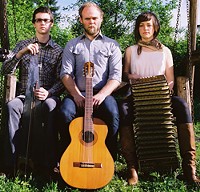 Horse Feathers w/ Sara Jackson-Holman Tuesday, November 18 The Firebird 8:30 p.m. | $15-$17 By Christian Schaeffer Singer, songwriter and bandleader Justin Ringle took over a year off from writing, recording and performing in between Horse Feathers' 2012 Cynic's New Year and the just-released So It Is With Us. The time off gave Ringle and his compatriots time to burnish their acoustic-folk roots while deepening the group's approach, specifically with the addition of a full-fledged rhythm section. Ringle maintains his beautifully featherweight vocals but divines a more soulful spirit on the new LP.

Shaggy w/ Ay Musik Wednesday, November 19 The Ready Room 8 p.m. | $18-$22 By Tara Mahadevan Shaggy is best known for his pop-reggae-hip-hop fusion songs, "It Wasn't Me," "Angel," and "Boombastic." Now it seems our favorite purple-satin-robe-clad musician has veered a little from his fusion path and is creating solely reggae music. His latest offering Out of Many, One Music, released October 2013, only features one-drop reggae, a style that was revived by Bob Marley and the Wailers drummer Carlton Barrett. Shaggy debuted the album in Jamaica at the famed dancehall session Rae Town, deriving the album title from Jamaica's national motto, "Out of Many, One People." Shaggy is indeed going back to his roots, and with full-force.

Undercurrent 11 w/ Britches, Kevin Harris, Nathan Cook, John Tamm-Buckle Thursday, November 20 Schlafly Tap Room 8:30 p.m. | free Josh Levi In an effort to showcase the variety in punk, experimental and underground music in the city, Wrong Division, which (disclosure) is an entity operated by RFT Music writer Joseph Hess, continues its free, monthly series Undercurrent with a stellar lineup. For years now, Kevin Harris has been the go-to synth wizard in the St. Louis area. Having developed his craft in his former home, the now-defunct Floating Laboratories, Harris exhibits a masterful hand with computer-generated synthesis and the limitless world of modular synths. John Tamm-Buckle's dream mash-up of Venetian Snares plus Sissy Spacek reveals itself in a beautiful, IDM hybrid. Britches' obliterating, blown-out noise-rock is bliss to both open minds and ears.

Kentucky Knife Fight (Farewell Show) w/ Whiskey Folk, Christian Lee Hutson Saturday, November 22 Off Broadway 8 p.m. | $10 By Christian Schaeffer From this Homespun review of 2013's Hush Hush: Hush Hush: Wherein the St. Louis-via-Edwardsville band marries its bluesy barroom blitzes with a cinematic scope. For its third full-length, the quintet remains clouded in cigarette smoke and dark-tinted glasses, but there's a touch of the auteur with how the album is assembled. Take, for instance, the 45-second "Theme for No One," which introduces "Love the Lonely" with a bit of spacious mood music. The "Paper Flowers" suite is more ambitious: The triptych is spread out throughout the album and presented in reverse order, opening with a piano-and-Mellotron vignette that owes a little to Frank's Wild Years-era Tom Waits. It's a disparate form of storytelling for a band that prefers a bash-'em-out style of song craft (and there's plenty of that on Hush Hush), and the bookends of the album find singer Jason Holler turning his twangy yelp into an intimate whisper.

Misfits w/ Hung Like a Martyr Saturday, November 22 Pop's Nightclub 7 p.m. | $20-$27 By Mike Appelstein Inspired in equal part by the Ramones and old horror movies, the Misfits oozed out of industrial northern New Jersey in the late 1970s. Like Black Flag, the group made a series of classic punk rock records that still hold up today -- the first ten seconds of "We Are 138" alone are enough to wake the dead. Also like Black Flag, the band's former and current members have been fighting and suing each other ever since. Lead singer Glenn Danzig has long since distanced himself, but bassist Jerry Only continues to tour and record under the Misfits name with guitarist Dez Cadena (himself a Black Flag alumnus) and drummer Eric "Chupacabra" Arce. Supposedly the group is still a lot of fun live, so here's your chance to revisit Halloween in November.

The Urge Saturday, November 22 The Pageant 8 p.m. | $10.57-$35 By Bob McMahon From this 2011 show review: "We have an announcement: The Urge is back!" While it was nice of singer Steve Ewing to mention this midway through his band's first set in six years, it was also totally unnecessary. From the moment Bill Reiter and Matt Kwiatkowski blasted the staccato intro of "Violent Opposition" out of their horns, it was obvious that the Urge was back and sharp as ever. The local funk/ska/metal heroes powered through a crowd-pleasing eleven song performance that, aside from two barely noticeable slipups, showed no sign of the sextet's layoff.

The Mavericks Sunday, November 23 The Pageant 8 p.m. | $55 By Roy Kasten When you think of country music, you don't usually think of Latino influences, and certainly not the Cuban-American culture of Miami. Or at least you wouldn't were it not for the Mavericks, the greatest country band of the '90s, fronted by one of the genre's very greatest singers, Cuban-American Raúl Francisco Martínez-Malo Jr., aka Raul Malo. The Mavericks' fusion of Latin pop, Texas rockabilly and the driving, jangling Bakersfield sound resulted in massive hits before Malo departed to pursue a solo career. But the band's 2013 reunion album In Time and its subsequent tour have reminded fans of just how thrilling maverick country can be.