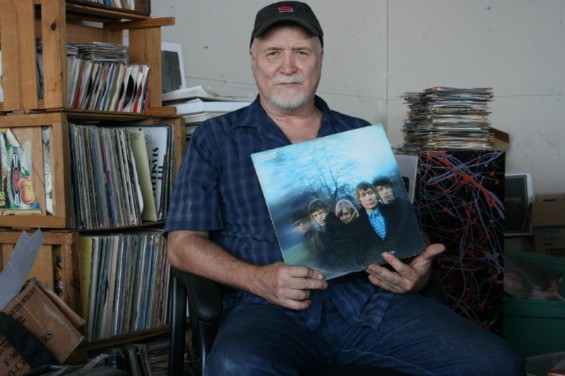 The Stage at KDHX was sold out for a screening of the documentary Bob Reuter's Last Tape, shown on November 16 as part of the Whitaker St. Louis International Film Festival. The film consists of testimonials from the artistic community, still photographs, footage of live performances and interviews with Reuter so intimate that director Josh Rolens deems them "confessions," serving as a retrospective of Reuter's life and work. The film oscillates between the extremes of Reuter's moods, from the bleak "I can't be happy" periods to the joy he derived from his artistic endeavors. Filmed a few years prior to his untimely death, Rolens captures the upswing, if not the height, of Reuter's creative life.

Bob Reuter was a filmmaker's dream subject, an expert storyteller with a flair for the dramatic. The film begins with an extreme close-up of Reuter's face, deeply marked by a life lived within the bowels of rock & roll, as he eerily tells the camera "they made me this way." After this dark opening it transitions to a lighter segment on the beloved KDHX (88.1 FM) program Bob's Scratchy Records. We see Reuter behaving like a bona fide madman behind the microphone, yelling, throwing records and positively freaking out. He obviously reveled in his DJ duties. Unfortunately, the music Reuter is seen playing during these sequences is not part of the picture, as acquiring the rights to these obscure gems would have been a logistical nightmare. The best scenes of the entire affair are here, though -- watching Reuter shop for oddball EPs to play on his radio show with childlike excitement.

Reuter's photography is explored in the film a well. The director had a personal connection with Reuter on this topic: The two first met in the darkroom at St. Louis Community College at Forest Park. Reuter turned to photography after deep vein thrombosis sent him to the hospital, leaving him with limited mobility in his legs and a new outlook on life. Reuter used his Pentax K-1000, a device that, according to him, "if it were any more primitive it would be a rock and a stick," to capture the bleak beauty of St. Louis' south side. He documented what he described as the "traveling freak show" that is the city's rock & roll underbelly with an aesthetic so timeless and eerie it's almost mystical.

The film then briefly explores Reuter's writing before shifting focus to his music. Reuter began recording in 1975 and never stopped -- the man was at the forefront of nearly every musical subculture from then until his death, from the proto-punk of the Dinosaurs to the alt-country of Kamikaze Cowboy to the bluesy garage freakouts of Alley Ghost. The latter was his latest and most impressive musical project -- members of the group had the youthful energy to keep up with Reuter's wild mind, which he claimed was perpetually stuck "at 23 or 17." Here, Rolens captures Reuter performing with ferocious intensity, stomping and howling like the Devil at church.

Bob Reuter's Last Tape was originally titled Broken and Wonderful, named for how Reuter described the internal war between his art and his demons. When asked about the change, Rolens indicated that he wanted the title to reflect the fact that Reuter had died. It is a bit of a shame, as the original title so beautifully captured the tension that existed within the man, though the film dwells on the darkness more than those who were closest to him would prefer. As Chris Baricevic, executor of Reuter's will, said, "The years that are missed in the film are the years where Bob was out there enjoying life.... He accepted himself, and he felt that the world began to accept him as well. The despondency turned into a completely different kind of energy, an urgency he felt to share his spirit with others."

Although the movie misses these crucial final years, it is a good introduction for those who have not heard or seen Bob Reuter's work. As an audience member said to Rolens during the Q&A that followed the film, "Everyone in St. Louis should see that movie."

The screening ended with a performance by Alley Ghost. Since Reuter's death, the band starts every set with a somber, "These are the songs of Bob Reuter." Brice Baricevic has taken on the terrifying task of filling in on vocals, but he steps into the gigantic shoes as though they were tailor-made for him. Alley Ghost continues to tour the country, spreading the "Songbook of Bob Reuter" to anyone who will listen, proving that Bob Reuter refuses to fade away, even in death.