Why Taylor Swift's "Welcome to New York" Is Bullshit 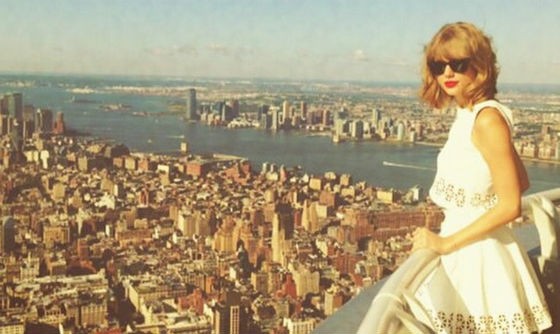 The first thing you notice about Taylor Swift's New York is that the East River has somehow been turned into a sixteen-mile-long flowing trench of frozen yogurt. Is it Pinkberry? Is it Red Mango? It's impossible to tell, but don't get close enough to find out, because if you fall in, there's no escaping. It's just frozen yogurt in your nose and your ears and your eyes until everything becomes a cloyingly sweet nothingness.

See also: I Love Taylor Swift, But Her New Album Sounds Terrible and I Might Hate It

This is, or might as well be, the New York in Taylor Swift's single "Welcome to New York," a place where anything interesting or difficult is smoothed away into digital handclaps and Auto-Tune. The New York of "Welcome to New York" is what you would get if you populated it entirely with humans raised in the Times Square Bubba Gump Shrimp Co., then let them out into the world with only a penthouse apartment, an Amex black card and leopard-print Prada luggage to guide them.

"Welcome to New York" celebrates as generic, flat and lifeless a New York as has ever existed in pop culture. Think about the song, and try to pick out a single detail about the city. You can't. Replace "New York" in the lyrics with "Des Moines," with "LA," with "Pittsburgh," any city you can shoehorn into the beat, and you wouldn't have to change a single detail. Taylor Swift's idea of New York is as boring as any rich, sheltered person's idea about it, but the difference is that most of them don't get to sing about it. Or if they do, no one ever hears it.

If you're young and hungry, moving to New York takes a leap of faith and an acceptance that life will be difficult and finding your way won't come easily. Swift's New York is passive; it's a city that's "been waiting for you," which is a completely unrecognizable aspect of a place that's the Grave Digger of naive kids who go there to make it. New York waits for no one -- that's supposed to be why when you get here, you hustle or you die. Well, maybe not die, but you do wind up moving back to St. Louis.

In managing to sing for three and a half minutes about how she loves New York, but not be very convincing as to why she does, Taylor Swift has written an anthem not for the city, not even for its hopeful transplants, but for its transient oligarch class. In a just world, "Welcome to New York" would quickly fade in the real world and find eternal life in promo videos selling tenants of luxury pieds-à-terre on the benefits of parking their money in One57 because New York is "magical" (and is a favorable climate for that kind of money laundering). Hers is a ghost-town New York, where no one has to worry about anything because no one actually has a ground-level existence in the city.

We don't live in a just world, though. So instead, Taylor Swift will ride the money wave of "Welcome to New York" to another, bigger penthouse apartment, and won't even notice that her song has the mighty El-P thinking about penning his "leaving New York" essay, because sometimes life imitates art, even when that art is bullshit.

David Colon is the editor at Brokelyn. He is on Twitter. He is mean.