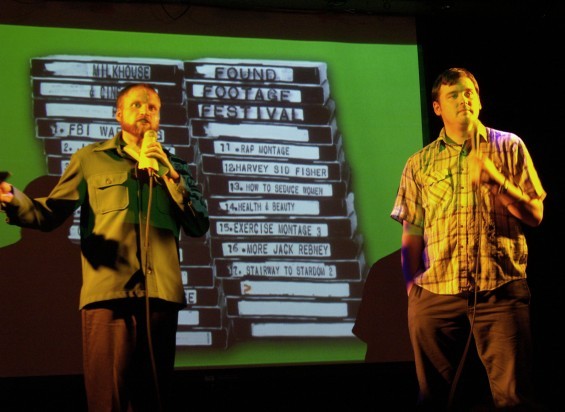 The Internet thrives on virality. If you watch it, you share it. It's how YouTube stars are born, and it's why an eleven-minute homage to '90s sitcom credits has racked up 2 million views in less than a week.

But those millions of viewers are watching at different times, in different places and on different devices. What's missing is a group of friends -- possibly high, possibly gorging on Domino's -- gathering in a living room to laugh uproariously and give each other the "What the fuck?" look every time a dude on an infomercial insists that his cat-training video will bestow riches and sexiness beyond viewers' wildest dreams. That's where the Found Footage Festival comes in.

"Everything becomes instantly funnier and more contagiously hilarious when you're in a group," says Found Footage cofounder and host Nick Prueher.

The Found Footage Festival tours the world with truckloads of videocassettes from the 1980s and 1990s that have been scavenged from thrift shops and warehouses. Hosts Prueher and Joe Pickett compile the best, weirdest, most outlandish clips from their massive stash and re-create the friendly living-room vibe in small arts venues, offering Mystery Science Theatre 3000-style commentary about the facial exercises, celebrity dance lessons and RV maintenance tips everybody is watching together. Now Prueher and Pickett's strange festival is ten years old and enjoying worldwide attention through late-night talk shows, the HBO Comedy Festival and a web series with the A.V. Club.

"When we first started doing the show ten years ago, we were doing a lot of explaining about what it was," Prueher tells RFT Music. "Now people get it, because the Internet has given them a little bit of a shorthand as to what these clips are all about."

St. Louis will "get it" when the Found Footage Festival makes its way to the Firebird tonight, November 13. The ten-year anniversary show includes clips sourced from a variety of cities, but Prueher insists that local audience members will want to pay special attention to a portion that came from a scavenging outing at the St. Vincent De Paul Thrift Store on West Florissant Avenue.

"I remember finding a VHS tape there called Sexual Fitness. That just made our day -- our year, really," Prueher says. "There's this guy who's just standing there with a woman straddled around his waist and doing sit-ups, and every time she reaches his mouth she gives him a kiss.

"There are other scenes where they're in the kitchen, and you see this woman on a guy's back, riding him like a horse," Prueher continues. "He's going up and down, doing squats with her on his back. She's wearing lingerie, of course."

Prueher says that the St. Louis show also will include VHS footage from a home movie found in North Carolina (a man is convinced that a newly discovered stick is a prehistoric weapon) and a reunion between John and Johnny, two bumbling home-shopping hosts who were featured during the first-ever Found Footage Festival tour ten years ago. You have to be a little off-kilter to appreciate the humor in what Prueher and Pickett are serving up, but it's something that has come naturally to the hosts since Prueher premiered a McDonald's janitorial training video for his friends in 1991.

"I popped it in and couldn't believe how ridiculous it was," says Prueher, who was working at a Wisconsin McDonald's at the time. "This particularly and outrageously was dumb and insulting. They showed this trainee's first day on the job, and he just couldn't wait to go clean the toilets.

"My thought was, 'This cannot stay in the break room; my buddies need to see this.' I took it home in my backpack that night, and that became our cult thing on Friday nights," Prueher says. "That got us thinking, 'There's got to be more [weird videos] out there,' so that's when we started looking in thrift stores and finding Mr. T videos and Angela Lansbury exercise tapes. The collection just kept growing."

Prueher, who says he had been put on probation at McDonald's for not smiling enough, is excited that the Found Footage Festival has generated such interest over the past decade, adding that the show's audience members sometimes dress as characters from previous clips. Hanging out with a large group, watching as Friends stars Jennifer Aniston and Matthew Perry learn about Windows '95 is what Prueher craves -- and it's something he doesn't find as readily nowadays.

"I think people forget how fun that is," Prueher says. "How many times have you been at a party and someone's like, 'You've got to see this video!' So they're all hovering around somebody's phone, and it's just lame. For us, it's not the same as that communal experience of being in a roomful of people and busting out a tape."

Luckily, there are enough people in the world who share Prueher's interest in adjusting the tracking on old VHS tapes.

"Being able to share this with other people is the coolest part of the show," Prueher says. "We thought we were the only ones doing this weird hobby, but there are other weirdos out there, too." The Found Footage Festival will be at the Firebird on Thursday, November 13. Doors are at 7 p.m., show is at 8 p.m. Tickets are $12.