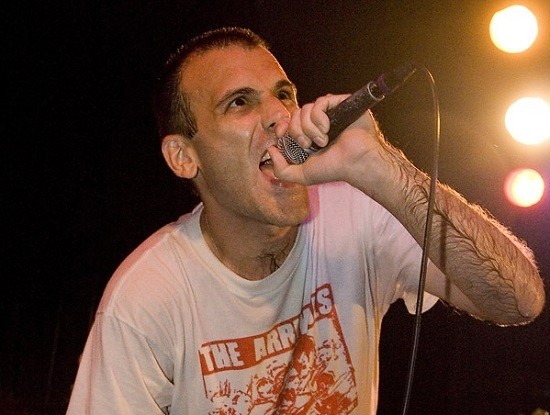 I've never had an interest in Screeching Weasel, as I don't listen to punk music that comes off like it was meant to be the soundtrack of a straight-to-video film about kids rollerblading in a shopping-mall parking garage. I listened to Boogadaboogadaboogada! a few times (primarily just so I could say I knew what the band sounded like) and I've gotten drunk with a pal of mine who has a tattoo of the group's iconic Fonzie-rat-looking character. (He's a good guy who also collects vintage board games -- cheesy tattoo be damned.)

Recently, however, the only time this band's name seems to come up is in reference to its singer, Ben Weasel, a guy who infamously punched two women during the band's set at SXSW in 2011. He also attracted some seriously unfavorable attention for a transphobic rant that same year, too. At this point, he's basically the Dave Mustaine (Megadeth) of punk rock.

See also: I Pissed Off Megadeth This Week, My (Former) Favorite Band

At the time, former wrestler CM Punk called the singer out for his actions, even offering to fight him one-on-one, with proceeds going to a battered women's shelter (Weasel declined).

Given this bizarre and even criminal behavior, it comes as no surprise that Weasel continues to behave like a psychotic asshole, having recently taken to Twitter and Facebook to encourage all of his female and transgender fans to fight his battle for him.

"I'm challenging all our female fans -- including all our M-F transgender fans -- to stand up with us onstage at our show in Chicago on 11/22 and challenge the big goon to a fight," Weasel writes. "He thinks it's so easy to slug a chick? Let's see him try!"

Because, you know, that's what people who are criticized for being unnecessarily violent toward women should do -- encourage more violence toward women. Here is that bizarre Facebook post, in full:

Okay gang, CM Punk's been running his mouth again and it's time to teach him a lesson. Who's CM Punk, you ask (along with the rest of the world)? Some washed up, burnt-out, has-been former wrestler who's been reduced to hanging out on Twitter challenging guys half his size to fist fights, that's who. I wish I was joking.

Yours truly was targeted by the big goof when he saw a YouTube video purportedly showing me hitting two women while on stage in Austin TX a few years ago. In fact I was hugging those ladies with my fists, not that it's any of his business. But the slobbering nitwit still challenged me to a fight, I guess so women will feel like he's a really great guy.

Well, guess what? I don't believe our female fans are delicate flowers in need of the protection of some oily mouth-breather who runs around in his underwear pretending to fight other men for a living. I think you ladies can hold your own. Heck, I KNOW you can.

So I'm challenging all our female fans - including all our M-F transgender fans - to stand up with us on stage at our show in Chicago on 11/22 and challenge the big goon to a fight. He thinks it's so easy to slug a chick? Let's see him try!

This is not a joke. If you're up to the challenge and can throw a solid punch, or even just kick a gym-muscled bully in his shriveled-up, steroid-ravaged nuts, post in this thread. Our road manager Kotton will contact you if we can use your help.

Let's shut this buffoon's mouth once and for all!

Reading Weasel minimize his undeniable attack on two women with the words "hugging those ladies with my fists," is almost out of this world. But certainly, that's not the end of it. He's also on some sort of retweeting binge, displaying numerous Tweets of people wishing him cancer and longing for the days of his crippling social anxiety.

Continue to page two for some particularly scathing reactions.

I liked Ben Weasel a heck of a lot more when he had anxiety so crippling that he couldn't leave his house.

Is there anyone who deserves cancer more than Ben Weasel?

Not entirely big news but holy shit Ben Weasel is a fucking tool.

Ben Weasel wants women who are fans of his to challenge CM Punk to a fight. This is next level insanity from him

Dear @CMPunk, please pummel Ben Weasel into oblivion. I won't ask for anything else for Christmas. Thanks buddy.

While it's easy to dismiss the guy and launch some sort of Call To Action to publicly denounce Ben Weasel, a more productive route may be to ask, "What the fuck is going on with this guy?" Isn't there someone close to him that is capable of issuing a public statement on his current mental health? Maybe CM Punk could show up to the event where he's supposed to get beaten up and just bring along a team of qualified social workers and psychologists?

Sadly, probably nothing happen as a result of this obvious red flag. Weasel will likely continue on his downward spiral into loneliness and poverty while former fans look on and continue making fun of him. Booking agents and other music industry leeches will continue nodding and patting the guy until there's no more money to be made. And the world continues to turn.