Minneapolis' Miami Dolphins Is Not a Football Team From Florida 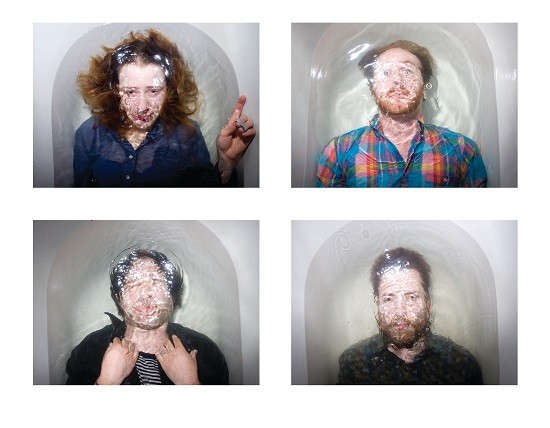 Aside from the fact that it is decidedly not a sports team (but also, still totally a sports team), not much is known about the whimsical Minneapolis band Miami Dolphins. Having carved a quirky cacophony into the foreheads of freak deviants and gleeful art-school nerds alike, the band seems to garner a wide array of bizarre comparisons from every direction. Terms like "angular avant-punk" and "spazz-rock" drunkenly dance around reviews while other confused music aficionados liken the group to the Minutemen, Wire, Dog Faced Hermans, Fantomas, Le Tigre or a kindergarten class on a sugar high.

Because describing music is often ultimately pointless, we turn to Miami Dolphins guitarist Patrick Larkin to dazzle and tantalize readers in advance of his group's upcoming show at Kismet Creative Center on Wednesday, November 19, with an interview that is the written equivalent of listening to a live Butthole Surfers record.

Drew Ailes: Why haven't you been sued for your band name yet?

Patrick Larkin: Because we all come from wealthy backgrounds. [Vocalist] Beth's godfather works for Halliburton, Joe Biden is [drummer] Joe's grandpa, I'm related to Mark Zuckerberg and [bassist] Ronnie's father ghost-funded the Die Hard trilogy. Actually, the truth is, the big-time execs with the attorneys and the pocketbooks know there's nothing in it for them. They can't suck us dry for hardly anything!

There are other bands now called the New England Patriots and the Utah Jazz. Do you kids take credit for this ridiculous movement?

Those are sports teams, you idiot.

How do you describe your music? It's quirky, spastic and what other word?

Our marketing team has encouraged us to use terms such as "surf and turf," "noise-pop," "indie" and "cheer and jeer." However, we've lately been tending toward more marketable phrases such as "explosive power-pop rock & roll" and "handsome people playing palatable, inoffensive music" and "cheap beer party rock cigarette cool." It's too bad that sometimes we get billed as "female-fronted," as if that is a schtick or a novelty. How about "dude-backed"? Or "100 percent of this band has anuses"?

Isn't that the jazz band who wears Beatles outfits? People always want to compare us to Ponytail and Melt-Banana. Which is cool. But then again, why don't they go the extra step and say Teenage Jesus and the Jerks, Priests, Marnie Stern, the Dixie Chicks, the Yeah Yeah Yeahs and the Raincoats, since they are all also alt-rock bands with female singers? To be honest, we are just trying to sound like a mix of Weezer, the Baja Men and Panic! at the Disco. Turns out we're missing the mark.

Has anyone ever accused your band of being boring? To clarify, I ask because I feel like what Miami Dolphins is doing is very captivating.

What do you think the goofy nihilist punks of St. Louis stand to learn from your ragtag team of take-no-shit rule-benders?

This goes for all music scenes: Believe in yourself, do your homework, and be kind to your neighbor. Nihilism is boring. Embrace goofiness and self-expression. Don't latch onto the familiar. Blah blah blah. Give up on PBR. Also, this is an overgeneralization and not related specifically to St. Louis -- we don't know the scene that well there anyway -- but a lot of new punk sounds a little bit too much like it did twenty years ago. What gives?

How will you guys know when you've really "made it" in the underground?

When LiveNation finally asks us to open for Off! Getting a twelve-inch pressed was another -- we just put out our first, Becky, in September on FPE Records in Chicago. We also heard that the Melvins listened to us once, and Thomas Hazelmyer of Amphetamine Reptile Records told us he liked one of our tapes. No big deal. Finally, we opened for Immaculate Vagina earlier this year. We thought it would be our big break, but we are still waiting to be sucked up into the hype machine, chewed up and spat out the other end $50 richer and with a free lifetime membership to Guitar Player magazine.

When is the last time you got into a fight over the Internet? What was it for?

One time Ronnie was holding the modem, and I was like, "Hey, its my turn to hold the modem," but Joe shot the modem with a pistol he keeps at his side. The depravity of the Internet can really get to us all. Like us on Facebook! Drip sheep's blood on your mattress and comforter for protection and good luck. Hopefully this interview will get us into an Internet fight which will then get picked up by a relevant music blog, and we will finally realize our full potential.

Have any of you ever been arrested?

One time I got pulled over by a cop who accused me of smoking reefer, and claimed the car stank of dank 420. I was eating a small wedge of bleu cheese at the time, and held up the cheese close to the officer's nose and said, "Is this what you smell, officer?" No charges were filed.