Things Your Local Band Should Know About Opening for National Acts

Your band has been playing shows for a while and seems to be getting popular. Perhaps you're still just rising stars on the hometown circuit or have hit the road a few times to try your luck at touring. Eventually, the day comes when you get a dream gig opening up for a big national act -- a band with a certain amount of fame and success that you've always looked up to, or at least respected.

Probably not. But as with most things involving the music biz, you'll probably learn some lessons along the way. I certainly did.

4. Just Getting the Gig Doesn't Mean Your Band Has Made It

Think about it: How many times have you gone to see a semi-famous band, only to sit through one or two local bands opening up for them? It's a pretty common setup: A local promoter needed to pad the lineup, and called up Death Hippie and XCiter to open the show. Sometimes you get lucky and discover a great band you hadn't known about; other times you just want them to finish up so you can see the band you paid to see.

That promoter's decision might have been made for any number of reasons -- local popularity, or your band plays a style of music similar to the headlining act, or maybe you were just the first band to answer the phone. Who knows? Sometimes a local radio station might hold a contest to decide which local band gets to play.

There are lots of reasons you might get offered the gig -- but that don't necessarily mean your band is rocketing to the top. Yes, it's probably a good thing to get to support larger acts, but think of how many long-forgotten bands you've sat through while waiting to see the headliners. It puts things in perspective when you realize that you never heard anything from those opening bands again. Either they didn't rise to fame, or the members of Krokus have a policy of murdering everyone who ever opened a show for them. Actually, the band did have an album called Head Hunter, so it's not that unlikely.

A high-profile spot opening for a national act can create momentum for a less famous act, but it might also end up just being another show. Next week Death Hippie might go right back to opening for that scary hobo who juggles dogs down at the local community center.

3. You May Never Meet the Band You're Opening For

This was one of the weirder things I learned, although it makes perfect sense. Your band might never interact with the famous band you're opening for. You might never meet the people in that band. I know a guy whose group toured with several others opening for a relatively famous heavy-metal singer.

My pal was a huge fan, on top of the world at getting the gig, and figured that he would become best buds with his hero. He was only in the same room with the guy a handful of times, and very briefly at that. After a monthlong tour, he finally managed to get a photo of the two of them together, and that was the extent of their new "friendship."

Everyone is different, but many rock stars tend to be insulated from a lot of the things that make their concerts possible, and that includes the opening bands. A lot of times the guys in a famous band are either sitting in a private area backstage or they don't even show up at the venue until right before they go on. Afterward, they're immediately whisked away to wherever the oiled midgets and swimming pools full of cocaine are located. They're not generally going to be interested in having a few after-show beers with the local bands who opened their concert, especially bands they've probably never heard of before.

Years ago, my friend Doug's band opened up for KISS at a beach concert. The closest he got to any members of KISS was in a huge tent set aside for the bands, and the sex-obsessed senior-citizen clowns in KISS were in a separate, roped-off area. My friend got just close enough to hear Paul Stanley make a derisive remark about him (that he looked like Nikki Sixx, but without the money). Burned by Paul Stanley! Oh, the humanity!

So, yeah, even bands that play multiple shows on the same tour with a famous act might never really spend much time with its members. They might be traveling independently of one another, staying at different hotels and only be in the same general place when they're at the venue for the show.

2. Famous Musicians Are Often Nothing Like Your Image of Them

Rock music of all types is dependent on a certain amount of illusion. As hard as it may be to believe, the guys in Slayer probably aren't really Satanists, David Bowie probably isn't really a space alien, the men in Poison don't wear Revlon on their days off and GWAR isn't actually a group of monsters with giant cocks. Beyond the images they've carefully crafted (and all famous musicians have some kind of image they've carefully created), the reality of what they're actually like is often completely different.

If you do manage to spend any time with the rock stars your band opens up for, particularly if they've been around for a few years, you may discover that despite the image of nonstop partying, a lot of those people are surprisingly sedate and boring offstage. I once had a singer for a famous industrial band ask me a question since I was local and knew my way around town. The question: Where could he score heroin? Did I know which of the local groupies to avoid?

No, he asked me if I knew a good vegetarian restaurant near the club where we were playing. 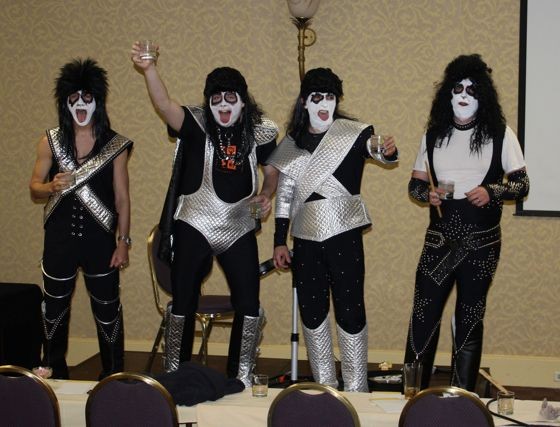 1. My Idea of What a Rock Star Is Has Changed

After opening for a lot of bands I grew up listening to and idolizing, most of my preconceptions about stardom have slowly faded away like Ozzy's memory and speech skills.

Many of the bands I opened for played large clubs by that point in their careers. They'd been around for a while and were still hitting the road, but they weren't playing stadiums anymore, if they ever had. Nothing wrong with that, but it was interesting to learn that many of them had some form of day job or another income stream apart from their music.

I had a lot of situations where I'd meet some guy I'd thought of as a rock star in my youth, and find out he was a nice person who worked at a record store when he wasn't touring. I began to think of rock musicians differently. There are the people and bands with what I call "perma-fame" -- they've been been around long enough and gotten famous enough that just about anyone would recognize them or know them by name.

People like Mick Jagger or Keith Richards would fit that category; guys like Faster Pussycat's Taime Downe would probably not. Basically, if my parents have never heard of a person, then they don't have perma-fame. However, that doesn't mean that those people aren't famous on some level, or that their music sucks.

In a lot of cases, I would take the music of those lesser-known rockers over more famous ones any day. Aerosmith may be enormously popular, but that doesn't change the fact that Steven Tyler is a prune-faced goblin who needs a constant supply of baby blood to survive. Worse still, when was the last decent Aerosmith album released? Thirty-five years ago? More? Never? Would the world have been any worse off if the Rolling Stones had called it quits after Tattoo You?

So my hat's off to the musicians who are still playing shows and making good music despite the fact that their level of fame may have peaked or diminished, or they're only considered rock stars by a small segment of the population. In the end, anyone who manages to even make a meager living playing music without self-destructing or becoming a bad joke is worthy of my respect.

Now get in the van! Those Death Hippie shows aren't going to play themselves, and we're opening for Blackie Lawless tonight.