The 10 Best Concerts in St. Louis This Weekend: November 7 to 9 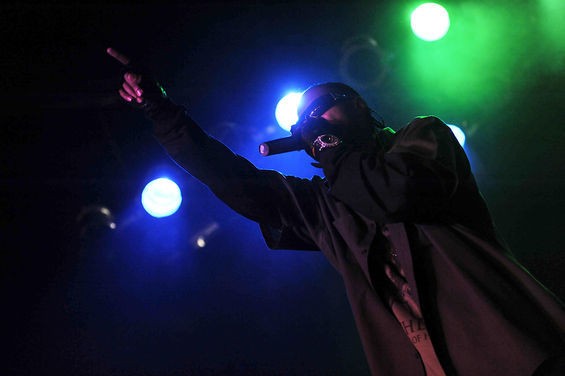 This weekend feels especially packed, which is odd considering Halloween (a holiday this city really takes to heart) was only last Friday. While some of us are still finding stains from a gross misuse of fake blood, there's no rest for local bands, venues and promoters. At least that means a huge range of great shows to choose from. As usual, we've tried to highlight a few shows that might otherwise go under the radar, but if nothing here wets your whistle, check out Out Every Night, our weekly column that features different previews for Friday, Saturday and Sunday.

Bone Thugs-N-Harmony w/ AD, Almost Kings, Sir Trigga, Skinny, Yak Boy Fresh, Vince Sega, RIP James November 7 Pop's Nightclub 7 p.m. | $22-$27 Bone Thugs-N-Harmony has been around for a minute. The harmonious thugs are now gearing up for a final album, which will drop in 2015 and only exist as one copy -- better yet, that copy is going to be auctioned off with a starting price of $1 million. (TM)

Fister w/ Beneath Oblivion, Grand Inquisitor, Path of Might November 7 The Firebird 9 p.m. | $8 Because you haven't burst your eardrums to crushingly loud doom-metal lately, and Fister is obviously the best in the biz in STL. Approach vocalist Kenny Snarzyk at the show, ask him about Walter the Dog, and then give him all of your money. (DH)

Raven w/ Night Demon, October 31, Stone Magnum, Terra Caput Mundi, Animated Dead November 7 Fubar 7 p.m. | $18-$20 Genuine NWOBHM peddlers from the olden days, performing at the relatively small Fubar. If you are going to remember one song from this legendary group, it will probably be this one, 1985's "On and On" (WARNING: '80S AS FUCK). (DH)

Bear Hands w/ Fences November 8 Off Broadway 8 p.m. | $15 Post-punk played by former NYHC scene punks, who have opened for GZA of the Wu-Tang Clan. This band has "legit" written all over it, and the tunes ain't so bad either. (DH)

Ty Dolla $ign w/ Lil Bibby, Joe Moses, A-Game, MARKOE November 8 The Ready Room 8 p.m. | $20.50-$23 Ty Dolla $ign has been on the come-up since 2010, when he wrote and produced the YG song "Toot It and Boot It." Since then, Ty (who is sometimes just as much of a crooner as a rapper) has become pretty well-versed in the mixtape game, dropping seven tapes from 2011 to 2014 before finally releasing his debut EP Beach House this past January. (TM)

Yowie w/ Sand, Omoo Omoo November 8 The Heavy Anchor 9 p.m. | $5 By using two guitars and an embellished drumset, Yowie crafts contemporary classical music through atonal sounds. Rather than focus on traditional forms of melody-making, Yowie packs in more parts per song than most bands write for an entire album. (JH)