The 10 Best Concerts in St. Louis This Weekend: October 31 to November 2 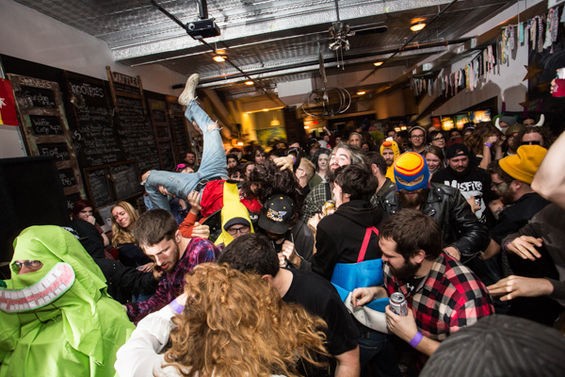 All Hallows' Eve is going down whether you love it or not, so just give in and throw on your clever last-minute (and culturally relevant) costume. We've laid out a great list for not only tonight, but for Saturday and Sunday as well, so read on and plan for the weekend ahead.

Avi Buffalo October 31 Old Rock House 8 p.m. | $20 The somewhat surreal, somewhat folksy band Avi Buffalo had a surefire plan to avoid the sophomore slump from the start. Its 2010 Sub Pop debut offered plenty of quirky sing-alongs, but in its indie-pop-centric modesty the music was hardly mind-blowing. This year's At Best Cuckold is simply that album plus studio savvy and a trumpet-muted love for the Zombies. Avi Zahner-Isenberg writes with charming mirth -- "Memories of You" juxtaposes pop grace with some of the goofiest lyrics of the year -- but he also knows that opting out of the race to the indie-rock bottom is the best bet. By just letting beautiful melodies lead the way, Avi Buffalo might just win the audience it deserves. (CS)

CaveofswordS w/ Pat Sajak Assassins, Superfun Yeah Yeah Rocketship October 31 CBGB 10 p.m. | Free Vocalist Sunyatta McDermott leads CaveofswordS with a powerful voice, bringing together a hot fever dream of shoegaze and indie pop. The group connects so well onstage you'd think they're psychically linked. Pat Sajak Assassins has played on Halloween for the past ten years or so. For whatever reason, that band has a love affair with the holiday, but don't expect covers like most of the other shows on the same night -- this concert keeps things original. (JH)

Hallow-WEEN w/ Fattback and Dock Ellis Cooper: A Tribute to Alice Cooper October 31 Off Broadway 8 p.m. | $10-$13 With Gene Ween now living the sober life and leaving the band behind him, Off Broadway's annual Hallow-WEEN tribute show may be St. Louis' only chance to see the group's music performed in a live setting. This year features Dock Ellis Cooper -- it shouldn't take you a lot of effort to figure that one out. Exciting! (DH)

Kill the Noise October 31 The Ready Room 8 p.m. | $25-$28 Jake Stanczak, the brains behind Kill The Noise, seamlessly crosses genres, using different styles of electronic music as tools to deliver a distinct sound. The final product is a survey on modern American dance music -- busy, but still easy on the ear. (JH)

Avant November 1 Lumiere Place Casino & Hotel 7 p.m. | $25-$40 R&B singer Avant has worked with the likes of KeKe Wyatt, Snoop Dogg, Lloyd Banks and more since he hit the scene in 1999. He names R. Kelly as a major inspiration, but don't hold that against him. (DH)