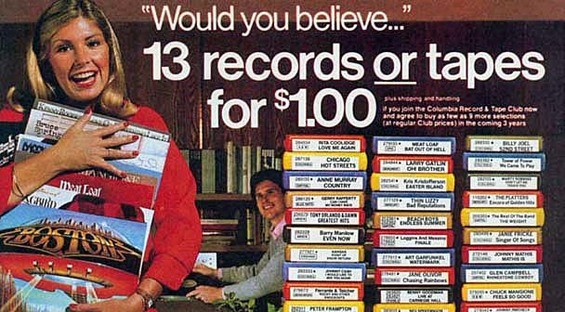 Remember the first time you listened to music using a computer? This is a moot question for people under the age of twenty.

I was at a friend's house sometime in the mid '90s. He loaded a program called Winamp on his computer, and played one of a dozen or so MP3 files he had. It was the 1985 Falco synthpop masterwork "Rock Me Amadeus." Did I chastise him for daring to listen to compressed audio through computer speakers? Was I pissed that he didn't have to special-order a CD single and drive miles to drop $14 on it? I was absolutely not whispering, "This is the end" under my breath.

It was one of the most incredible days of my life.

It would be a few years before I had a Gateway 2000 desktop, a CD burner, a university-powered Internet connection and Napster, and several more before I owned an iPod Photo. But on that fateful afternoon, the idea of being able to listen to whatever music I pleased whenever and wherever -- without carrying around a big Case Logic full of discs -- started to become more real. At no time did it send me into convulsions at the thought that this would signal the end of access-based snobbery. (Now it's just finding out when you get an invite to Ello.co.)

Montana-based Dan Brooks recently wrote a piece for the New York Times called "Streaming Music Has Left Me Adrift." The good news, he writes, is: "Now that nearly every piece of recorded sound is as easy to find as any other, everyone can finally listen to what we snobs wanted them to hear all along."

More like: Nearly every piece of recorded sound is crowding an ever-growing shitstorm of a cloud, and people who know what they're looking for can usually find it with only a mild risk of accidentally downloading spyware. Regardless, his statement, untouched, is truer than it ever was before.

What could possibly be the bad news?

Well, Brooks -- or his Internet-trolling persona -- is convinced that "what was once a robust system for identifying kindred spirits" is donezo. A series of paragraphs follow describing him experiencing coolness -- "New York City squat-punk band Choking Victim," for example -- and the fact that he was invited to a party at his college professor's house. Also, there's a lot about how access to digital music somehow screwed up his dating game. Uh-huh. (How will we ever meet people if we can't walk up to the section of the record/book/video store and remark, "Isn't it insane how many [insert media type] there are about _____?")

Go ahead and read the thing if you have some time, but also save some for critic Ned Raggett's detailed deconstruction of the piece. Within, a lot of smarter people than myself say why the only real choking victim in the piece is unswallowable-rhetoric-creator Brooks himself.

Among many, the main problem I had with his point of view was recalling actual access to anything useful -- let alone signifiers of cool -- before Spotify, Amazon and BitTorrent. Especially when you live in the sticks, as I once did.

It's not said if Brooks ever lived in an isolated part of Montana, but he -- or, again, this persona -- writes as if he was born surrounded by fanzines, college radio, intelligent record clerks and the ability to taste a properly prepared cappuccino.

"The members of the resistance don't recognize one another anymore," he laments, referring to people rejecting whatever the mainstream was selling. For myself, a Minnesota small-town "resistance" was filtering information from 120 Minutes, Yo! MTV Raps, mass-marketed music magazines, a few friends' cool older siblings' recommendations and alt-rock radio. Take that knowledge and hope that whatever the fuck was in stock in the Kmart music section would be worth owning for the long term. (Yay for lots of bad ska and "eclectic" movie soundtracks!)

Aside from all of the entry-level music journalism jargon like "Dave Mustaine and co." I eventually learned reading Columbia House newsletters, I don't miss any of that old exercise of throwing my money against the wall to find out what sticks.

To Brooks, the power of an Internet search box diminishes "commitment": "You didn't have to support local businesses or hang with freaky beatniks to hear Choking Victim anymore, so liking them became no better (or worse) than liking Pearl Jam."

What's wrong with that?

First, supporting local businesses holds up assuming your town ever had a local business selling music other than a big-box chain. (Mine did, but only briefly.)

Second, having sat through an inordinate number of directionless conversations essentially boiling down to "obscure = always much better," some of those freaky beatniks out there have horrible taste.

(Not to mention that going after a mainstream act like Pearl Jam -- what with a fiercely active fanbase and a far-from-awful live experience -- is essentially smearing poop on a garbage heap to attract more swarms of Internet flies.)

Today, it's theoretically possible for anyone who feels like it to evaluate Choking Victim or the Slits or Kraftwerk or White Boyfriend or whomever, and this seems to bother Brooks immeasurably. Buh-bye, cultural elite. Or maybe it's just a chance for anyone older than nineteen and holding down a full-time job getting exposed to something better than what's lurking in a Starbucks endcap. A whole lot less time spent searching and then lugging around physical media means more time actually listening to songs that will make your heart want to explode into a million pieces.

So congratulations, Dan Brooks. You got the Internet talking about how "everything's amazing and nobody's happy" when it comes to even semi-cool consumers realizing they have options beyond the Fray's "How to Save a Life" to assuage teenage frustration. Well, I am happy, mostly. You also got me to stream some Choking Victim today. I hoped I would dislike it as much as I did your article, but I didn't.