Movie and Television Licensing Deals Provide Exposure for Bands in St. Louis and Beyond

For many kids with guitar-shaped stars in their eyes, cutting an album deal is what it means to be a successful musician. Those ten cherry-picked songs backed by a major label signify "making it" -- something that will launch them into superstardom, world tours and giant piles of money. And once upon a time, that's kind of how it was.

But the times, they are a-changin'.

These days, many musicians -- including some in St. Louis -- reach millions of listeners by licensing their songs for use in television shows, films, Web series, commercials and other avenues. Not even a decade ago, this kind of song placement often was off-limits to artists who weren't already making bank. But today, there are more ways for bigwigs to discover and use music by lesser-known musicians.

"For everyone who makes a living in music, this stuff is really critical," says Gary Pierson, partner at Pierson/Wells, a boutique law firm in St. Louis that specializes in entertainment issues. "In some ways, what's happening with songs sync-wise is even more important than sales. A record has to sell a million copies for it to be a success, but a really high-profile sync is kind of the same thing."

Pierson, who has represented major recording artists over the years, says that copyright law has a special provision requiring producers to obtain a sync (short for synchronization) license to use a musician's song in their work. And that means getting permission from the owner of the composition before playing the song during a television episode or radio advertisement.

But to nab one of these sync placements, as they're called, musicians first have to get onto a producer's radar, and Pierson says that often happens in two ways (though there are many variations).

First, a member of the production team might contact an artist directly, because he or she already is familiar with the music. 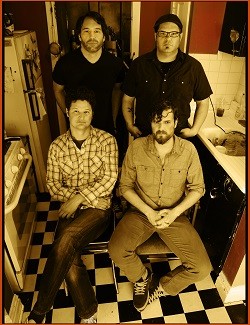 St. Louis indie-rock band Pretty Little Empire is experiencing this firsthand. Over the years, the band has licensed music for New Balance shoe commercials and other brands, but recently, PLE hit a Hollywood jackpot, says lead vocalist Justin Johnson. The group has licensed five songs for the flick The Last Time You Had Fun, starring Demetri Martin and Mary Elizabeth Ellis, thanks to a longstanding friendship with director Mo Perkins that began during his film-festival days. (Johnson toured with his own 2009 film Zombie Girl: The Movie.) Johnson has shared PLE's music with Perkins over the years, and the director fell in love with the group's 2013 self-titled album.

"It wasn't until later that I found out that the woman from It's Always Sunny in Philadelphia [Ellis] is in it, along with the woman from Scrubs [Eliza Coupe] and Demetri Martin," Johnson says. "Then it was even more exciting, because if a movie has people that someone recognizes, it's going to go further. It got into the Los Angeles Film Festival, which is pretty huge, and both their screenings sold out."

The Last Time You Had Fun was made on a limited budget, but Pretty Little Empire was compensated and credited for individual songs at the end of the movie. Johnson hasn't yet seen the film, but he likes how Perkins uses his music in the trailers posted online.

Preview clip for The Last Time You Had Fun.

"There was a [Web] story about the movie, and they chose a clip that had one of our songs in it," Johnson says. "They're using half the song; it plays through the whole scene, so that's really cool."

The second option for those seeking a sync deal is for a musician to add to a database of songs that are specifically licensed for sync placements. This is the route St. Louis indie-pop band Scarlet Tanager has taken, licensing songs from its first album, American Songbird, to Extreme Media, which highlights emerging artists.

Vocalist and songwriter Susan Logsdon says that because of the band's deal with Extreme Media (which originated at MTV but whose name and ownership has changed over the years), Scarlet Tanager's music has been featured on The Real World, Dance Moms, Catfish and, most recently, a commercial for GoPro cameras.

"Sometimes they'll send us an email saying, 'Hey, check out The Real World next week because your song's in it,'" Logsdon says. "But with the GoPro thing, we didn't even know about it. Michael [Logsdon's husband and a guitarist for the band] woke up to a text from a friend who said, 'I just heard your song on TV!'"

Logsdon says her band caught the ear of a music blogger who also happened to work at MTV2. The network was just beginning to put together its licensed song database and wanted Scarlet Tanager to be part of it.

"At first we were kind of skeptical. They sent over the contract and Michael had somebody look at it, who said, 'This contract's crap; you guys aren't getting anything good out of this,'" Logsdon laughs. "Then we talked to somebody else who said, 'This is where things are headed; it's not going to be how musicians used to make money.' We weighed it out and didn't see that many cons in it."

Like Pretty Little Empire, Scarlet Tanager earned a bit of cash for licensing its songs -- enough to move forward with recording and promoting a followup album.

"It was decent," Logsdon says. "It kind of feels like you're giving away your music a little bit, but I think we had taken American Songbird as far as we could on our own, so we thought, 'Let's just go ahead and do something with it.'"

And though licensing deals aren't always lucrative, entertainment lawyer Pierson says that the resulting exposure through media and social networking can be invaluable.

"If you have a fan base that's engaged, having a song on a commercial or TV show is going to be something that they like. They're going to see it, comment on it and share it," Pierson says. "I think it's a good thing to have your music used and out there, and there's something to building up a résumé of sync placements. The more songs that are used, the more they'll continue to be used."