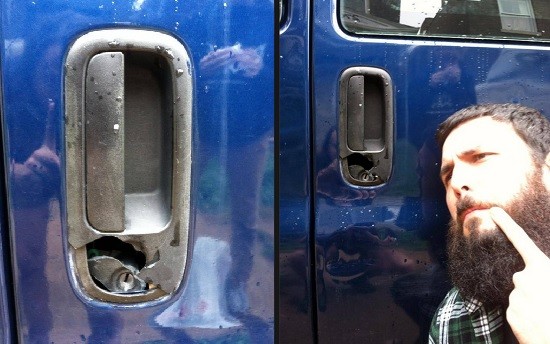 Following a rash of van break-ins that have stripped touring musicians of thousands of dollars worth of electronics, music gear and cash, venue owners are meeting with police on Thursday to figure out how to stop it.

The meeting, held at KDHX, will include owners from several area venues and representatives from the St. Louis Metropolitan Police Department's fourth district and Mayor Francis Slay's office.

This comes just days after Maine-based hip-hop artist Spose had his tour van broken into on October 20 while grabbing lunch at Pappy's Smokehouse. He performed at the Firebird the night before. On a GoFundMe page, Spose chronicled what was stolen, including "multiple laptops, all our musical equipment, my Canon 5D Mark II camera and lenses, everything I use to record my music, my mic, my Apogee duet, my iPad, clothes, phones ... all my external hard drives containing all the music I had made for my next album(s)." Spose also wrote that Sunday's show would be his last in town. "If you wanna see me perform in the future come to Chicago or something, cuz St. Louis is dead to me."

Mike Cracchiolo, who owns the Firebird, the Ready Room and the Demo, says venues cannot afford to have bands avoid St. Louis out of fear of their stuff being stolen. He says the Firebird has taken to sitting an attendant next to band vehicles to stop break-ins on its lot.

Some bands, it seems, might have reason to fear. Just five days before Spose's van was robbed, the Districts from Lilitz, Pennsylvania, was hit for the second time this year in St. Louis. The band's van was broken into on October 15 while parked in a lot outside the Old Rock House, where the group was performing. According to a post on the band's website, its gear was inside the venue, so only personal belongings were stolen. Keeping valuables inside was a lesson the band learned in June, when it had its entire van, fully loaded with gear, stolen from a lot near the City Museum.

We really hope to be able to continue playing to you, but your city has become notorious among bands as a place where shit gets jacked. After our van was stolen this summer out of a gated lot, within the following weeks it seemed unavoidable hearing about the number of similar incidents bands suffered from. We want nothing more than to keep coming here, but the risks posed to our gear is something no touring independent band can afford. This needs awareness and attention. It's not fair to you if bands begin to drive past your city on tours for the sake of their safety, but this will happen soon, we are sure, of it if something doesn't change. St. Louis has had plenty of attention with the issues it faces, and we understand that poverty, crime and police brutality are broad, complex problems that are difficult to overcome. Your people must say something, stand up for this change in order for St. Louis to be a place that is loved, not feared.

Spose and the Districts are only the latest in a swath of van break-ins this year. Nashville metal act Yautja posted to Facebook on October 12 that it had passports and cash stolen from its van. Field Vision, who performed at Plush on September 11, was hit for the second time in St. Louis; Traitors had a van window smashed and several belongings stolen outside Fubar on August 20; the Felice Brothers had an accordion and violin stolen from its van on June 29, the night before the band played at Off Broadway, while band members slept in a hotel; then there was Eyehategod's van outside Fubar on June 18, and Rivers of Nihil outside Fubar on May 14.

The meeting this week has been "a long time coming," according to Old Rock House talent buyer Brian McCormac, who estimates that ten to fifteen vans have been robbed near the venue this year. He says the Old Rock House tells touring bands to keep all of their gear inside while there -- and has hired an extra security guard to watch the vehicles -- but that "it's a matter of a guy turning around for ten seconds, and they're hitting vehicles."