On Tuesday, October 21, during a speech at Florissant Valley Community College, Governor Jay Nixon revealed his plan to create a "Ferguson Commission" to investigate the issues of socioeconomic and racial inequality in the St. Louis region that have been brought to light since the death of Mike Brown in Ferguson.

The committee will be tasked to "conduct a thorough, wide-ranging and unflinching study" surrounding the conditions of the Mike Brown shooting and following protests. They will then ask experts to advise on the best way to handle the identified problems and make recommendations on how to improve conditions in the area. 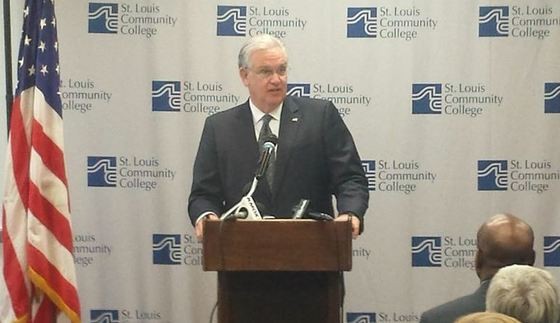 Nixon plans to announce the members of the commission early next month and has asked the public to help identify potential candidates including "thoughtful people from every walk of life, ordinary citizens as well as empowered leaders in business, education, public safety and our faith communities."

"When there is only rage and despair, anguish and chaos follow," he said in the speech. "Recently, one of the young Ferguson protesters said to an older protester, 'This is not your parents' civil-rights demonstration.' He wasn't wrong."

The protester quoted was St. Louis rapper and activist Tef Poe, who made the comment at an interfaith service-turned-protest during mid-October's "Weekend of Resistance." Tef has been an active leader in the Ferguson activism since the start. Aside from protesting publicly (including an arrest on October 13 for civil disobedience), he has penned a piece for Time as well as writing a regular column for RFT Music to voice his disappointment in the police department and government, as well as addressing the problems of racial profiling and injustice that black communities are facing.

For his part, Tef is unimpressed with the governor's plan. He criticized Nixon, saying that the governor "dropped the ball" with this opportunity to make changes.

"After the unrest of the late '60s, elected officials started all types of commissions," Tef told MSNBC. "Fifty years later we're still being killed by the police."