Schwarz Talks About Lil B, Social Media and His Protest Song "Hands Up, Don't Shoot" 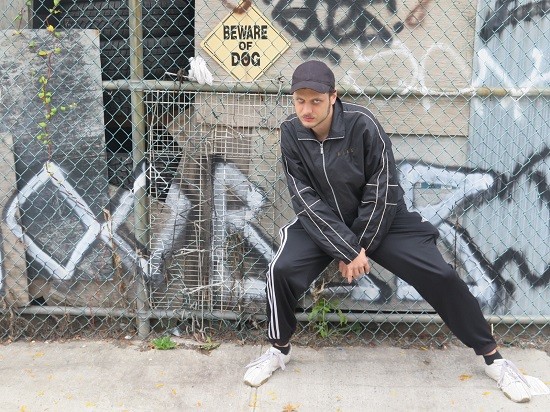 It makes sense that a world informed by social media and infinite feeds of information would inspire generations of artists. Such is the case for house-music producer Adam Schwarz. For years now, Schwarz has been producing high-energy club music from his homebase of Baltimore, Maryland. Imbued with the city's deep history with vogue and club culture, Schwarz has distilled his love for Baltimore house into a strange new beat. His take on the genre has allowed him to fill clubs from Baltimore to New York and even land a few spots producing for Internet rap icon, Lil B.

As a St. Louis native, Schwarz was deeply affected by the activism and police brutality surrounding his hometown over the death of Michael Brown. In order to raise awareness to those outside of the St. Louis area, he released "Hands Up Don't Shoot," a chilling Baltimore House track sampling actual audio from the Ferguson protests. We spoke with Schwarz about working with Lil B, social media's influence on daily life and what the Ferguson protests meant to him.

Josh Levi: How long have you been producing?

Schwarz: I started singing into tapes in elementary school and by middle school released my first full length CD-R of bizarre, weird music. In high school I started making rap beats for different people and continued that until I moved from St. Louis to Baltimore in 2008.

What was your initial introduction to club culture and house music?

To someone unfamiliar with this brand of music, what would you say makes it stand apart?

The kind of music I make and most of the music I really connect with is just super high-energy and fun and unpretentious, while avoiding being too corny. One of club music's main things I feel is just release. Letting go. A kind of really positive escapism.

In terms of production, who is really pushing the envelope right now? Who are some of your favorite producers?

I feel like there is an incredible amount of talent in Baltimore -- and Jersey and Philly -- doing club music. Some of my favorite producers of that stuff is my tourmate Kilbourne, DJ Diamond Kutz, DJ Irresistible, DJ 809, Matic 808, Rip Knoxx, James Nasty, KW Griff, Mike Gip. And I love vogue producers like MikeQ, Vjuan Allure, Divoli S'vere and Byrell the Great. And there's some great producers combining elements from club and vogue and other styles and doing club stuff like 333 Boyz, Rizzla, Vapordog, Baglady. I also love hardstyle production, and I really look up to a lot of rap producers. I love Zaytowzen and Mike Will, and a lot of stuff that's on rap radio.

This month saw the release of a new track you produced -- "Ima Bitch BASED FREESTYLE" by Lil B. How did that come about?

I've been pretty obsessed with Lil B since I first found out he had like 100 Myspace profiles full of songs in like 2009 -- and beats -- not long after becoming really into his music. We met in 2010 when I helped book him a show in Baltimore, and I've always continued to send him beats here and there. He used a beat that was a collaboration with me and 333 Boyz on his last mixtape "Hoop Life," and this new one that samples Meredith Brooks on his recent tape. I think his process is just that he gets sent a million beats and picks the ones he wants, and the producer doesn't know until it's on the mixtape.

You produced the politically charged track "Hands Up, Don't Shoot" in solidarity with the activism surrounding the death of Michael Brown. How have the protests surrounding Ferguson affected you? Was the protest song an immediate, organic reaction?

Seeing all the news and watching the feeds on what was happening in Ferguson was horrific. I am really upset as anyone should be by what is going on, with the way Mike Brown was murdered, the police reaction to it, and that most of people with power in this country are in some way purposefully upholding a racist system, but to see it happening so literally, it seemed like something really important for everyone to be aware of. All of it really affects me, and so it naturally was in my mind and made its way into my work.

How has Internet culture and the presence of social media informed your production?

Internet culture and social media has just become such a large part of my life. I can spend eight hours at a time in front of a computer like it's a job -- I don't have a day job right now. Of course, again, something that's such a large piece of my life is going to make its way into my work. I'm especially into Vine right now, and its relationship to club music, because it's just all these loops that are three to six seconds long -- the same as club music. And so many club music producers have sampled Vines and now there have been Vines that are really popular that have the club track sampling the Vine in them. It has a really cool, meta, back-and-forth going on.