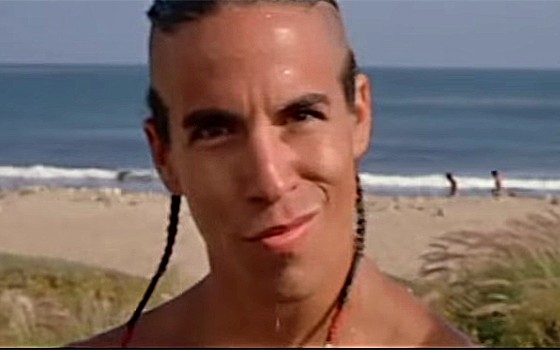 Not all cameos are equally coveted: A good cameo creates an undeniable rush (I know that person!) that widens the eyes and forces the viewer to blurt out the musician's name when he or she appears on the big screen, like Anthony Kiedis in Point Break. An even better cameo, in which the musician is cleverly disguised or appears so briefly, leaving you puzzled, forces you to rewind. (Was that just Alex Van Halen in Robocop?!) A bad cameo, like Vanilla Ice's dance routine in 1991's Teenage Mutant Ninja Turtles 2: The Secret Of The Ooze, is a mockery. Despite which kind of cameo we find, one thing is certain: We always enjoy seeing a familiar face in an unfamiliar territory.

Let's test your knowledge where movies and music collide. Can you correctly name which musician appeared in the following films? Check your answers on the last page.

See also: Quiz: Can You ID These Bands From Their Famous Typefaces

3. Yes, this musician really did show up at the New Years Eve party in 200 Cigarettes (1999), and accidentally left his infamous glasses behind. A. Elvis Costello B. Roy Orbison C. Elton John D. Bono

5. This musician told Marty McFly and the Pinheads they were just "too darn loud" during their Battle of the Bands audition in Back to the Future (1985). A. Huey Lewis B. Rick Springfield C. Robert Palmer D. Eddie Money

8. This Rolling Stone appears in Pirates of the Caribbean: At World's End (2007) and was the partial inspiration behind Jonny Depp's Captain Jack character. A. Mick Jagger B. Keith Richards C. Charlie Watts D. Ronnie Wood

9. This rocker and founder of Probot, a heavy metal side project, portrays Satan in Tenacious D: In The Pick Of Destiny (2006). A. Dave Grohl B. Marilyn Manson C. Ozzy Osbourne D. Josh Homme

11. This musician played 'the Wanderer' in Domino (2005), and provided music for the film's soundtrack. A. Leonard Cohen B. Nick Cave C. Bob Dylan D. Tom Waits

13. This rapper illustrates the following type of smoker in Half Baked (1998): "The Scavenger Smoker never has weed of their own, but as soon as you smoke it, here they come." A. Wiz Khalifa B. Rick Ross C. Snoop Dogg D. Juicy J

16. The lead singer of this ska band gets scalped by the evil severed hand in Idle Hands (1999) during a performance at a high school dance. A. 311 B. The Offspring C. No Doubt D. The Mighty Mighty Bosstones

Answers on the next page.