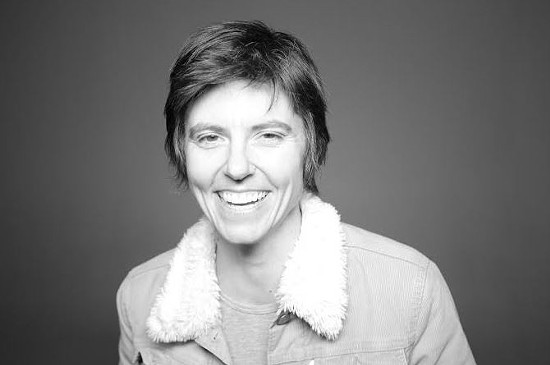 It's been little more than a year since Tig Notaro last stopped in St. Louis, but that was a something of a surprise show in Maryville University. So if you missed her then, this is your chance to not let this wildly praised comic slip through your fingers twice.

Notaro's cruising into the Ready Room on October 20, bringing her uniquely mellow, subversive style of storytelling with her. That style has a lingering, slow-burning pace to it, which may be best observed in her epic tale of accidentally stalking actress Taylor Dayne -- but Notaro's brilliance arguably lies in her heavier material. Her breakout album Live dealt with Notaro's bout with cancer in 2012, as well as host of other ailments and personal tragedies. The album became an instant standup classic, drawing a Grammy nomination and the breathless praise of none other than Louis C.K.

Since then, Notaro's nabbed a role on the Sarah Silverman Program, wrote a memoir (to be published sometime next year) and is now working with Showtime on a series called Knock, Knock, It's Tig Notaro, in which Notaro performs standup in fans' basements, backyards, garages and in other weird venues across the country.

See also: Tig Notaro Has a Special Relationship with Taylor Dayne; Does Not with State Fairs

We got in touch with Notaro by email, and asked her about her writing her memoir, making jokes about cancer and her new tour, Boyish Girl Interrupted.

RFT Music: Your standup style has been described as "intimate," but there's something more there. You embrace the heavy content matter, lead the audience to the edge of their comfort zone, divert the joke somewhere else and bring everyone with you. Was that something you'd honed before your bout with cancer, or something that emerged from that experience?

Tig Notaro: In regards to the heavier subject matter, that was the first time I had explored themes like those, as it was very much a time and place performance, that was prompted by a hellish four months I had been experiencing. As for comfort zones in comedy, I really enjoy that unknown feeling where we're all just dangling together not knowing what is to come. It has always been a part of my style that I think just time has honed it even more.

Are there other layers of your job that you're digging into for the new tour?

In regards to the tour the topics vary. I touch on everything from bombing at a comedy club in Vegas to stories about me and my friend searching for Santa Claus to even more personal events. There's also just plain and simple ridiculousness.

Is there a new album in the works?

I do not have a new album just yet, although it is something I am excited to do in the near future.

How has the success of Live affected your life as a working comedian?

It has helped open doors faster and easier than before, for sure. And new film and television opportunities have also presented themselves as a result. In addition, I have been fortunate enough to move into larger venues, which has been quite exhilarating.

You've been been writing a book, a memoir, since 2012. Why write a book? Is there something about the medium or process that lets you to express your story in way you can't on stage?

The book is about those well-publicized four months of my life. Even with all of the interviews and the album doing so well, that 30 minutes on stage at Largo was just a peek into all I had been experiencing. The book goes much deeper.

Comedy lovers in St. Louis were disappointed you couldn't stop by to film a segment of Knock, Knock, It's Tig Notaro, but we're still jazzed to see the finished product. Can you tell us about a particularly memorable stories from your cross-country comedy road-trip?

I have done this type of tour before working with Showtime and it was always so much fun to do. So I went into this project with high expectations of how much fun this would be, and it lived up, no doubt. I would say one of the coolest places we performed is toward the end of the project -- we were on a gigantic farm in Mississippi, and the way it was filmed is just so beautiful.

You've performed in St. Louis before, is there anything (food, entertainment, museum, etc.) that you're looking forward to visiting? What's your impression of the city? Does our pizza actually suck? You can tell us. We can take it.

Oh man, I have not been to St. Louis in years! More than anything I'm just looking forward to revisiting the city and checking out all possible in such a short period of time. If any readers want to post suggestions of what to do on my FB fan page, please feel free!