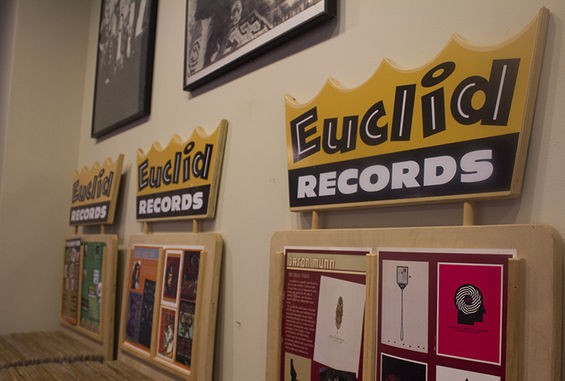 A St. Louis record store really is giving us a reason to read Playboy for the articles.

Playboy.com recently talked to Guided by Voices vocalist/songwriter Bob Pollard about his five favorite vinyl shops across the country, and Pollard put St. Louis' own Euclid Records at the top of the list. In his appraisal of the long-time institution's multi-city, multi-floor goodness, Pollard says, "Recently opened a store in New Orleans as well, which is great also. All jazz on second. I never have enough energy to go through everything in one trip, and I always spend too much money."

Pollard also includes on his Playboy list End of an Ear in Austin, Crossroads Music in Portland, and Academy Records and Other Music, both in New York City. Our favorite part about all of this, though, is the notion that Pollard is in heaven when he visits Euclid Records.

"Bob's a guy who likes good records, and we're a place that, hopefully, sells good records," owner Joe Schwab tells RFT Music. "Bob and I are about the same age, so I think what we stock and what he buys are pretty parallel to each other."

Schwab says that Pollard has a long history with Euclid, but even world-renowned rock stars can use a little guidance.

"I could help Bob with jazz. He never seems to make it there," Schwab says. "Bob can teach me about rock --and I'm pretty well versed -- but I have a pretty crazy jazz-record knowledge."

Pollard's nod to Euclid Records is just the latest accolade for the St. Louis vinyl scene. A number of excellent record stores have opened here over the past few years, and USA Today recently gave props to Vintage Vinyl, but music collectors had plenty of options in the past, too.

"St. Louis has always been a great record town. When I was a kid (in '59), there were great record departments in large department stores: Stix [Baer & Fuller], Famous [Barr] and Korvette's [E.J. Korvette], to name a few," Schwab says in an email. "We've also been blessed with some killer stores [like] the Record Bar (owned by Kevin Kline's pop), Streetside Records (one of the best in the Midwest, for sure), Music Village, Laclede Music, the Akoshik, the Pseudonym and national chains like Peaches and Discount Records. All were great stores.

"Today, I'm not sure if St. Louis knows how lucky it is to have so many outstanding record stores," Schwab continues. "I travel a lot, and except for places in California (I never make it out there), I think St. Louis blows away everywhere else. Just ask anyone in Kansas City!"

All of that music naturally leads to fun times -- and sometimes even sexy times. Because Pollard's praise for Euclid Records was posted to Playboy.com, we couldn't help but wonder what we should be listening to when it's time to get horizontal. Schwab had some advice for that.

We know what we're doing tonight.