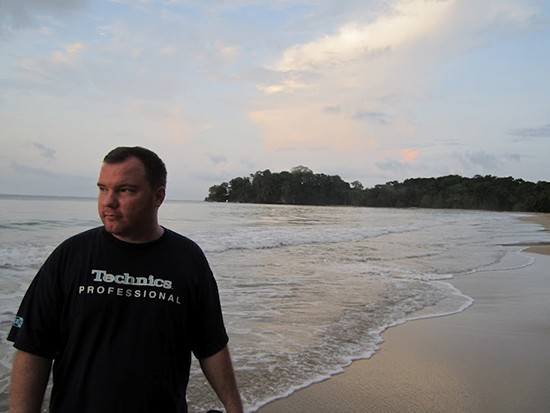 DJ Brian Bacchus was a teenager when he joined the Air Force in the late '90s -- a career that would land him in cities all over the world including London, Las Vegas and Monterey, California. It was on the west coast that he got his first exposure to house music, something he shares with the world to this day via his radio show, Summit Sessions.

"Bacchus," the Roman god of wine, was a nickname he picked up while performing in England, opening up for touring artists to regular crowds of more than a thousand concert-goers. The native St. Louisian occasionally DJs live at Upstairs Lounge to smaller, but equally enthusiastic music lovers, but it's his weekly two-hour radio show featuring international touring DJs that's made the most waves.

Summit Sessions is recorded in Bacchus' own basement and airs over several Internet radio stations in cities including Buenos Aires, Bucharest, London, Paris and Scottsdale, Arizona. Later available as a podcast, the show picks up thousands of plays. He features what he refers to as progressive house, techno and tech-house, building evolving intensity with woven melodic elements and overlapping mixes.

I got into DJing because... seeing Sasha play (many, many years ago), how he could emotionally affect people and then completely change the mood had a lasting impression on me. I'm not a particularly emotional person normally but I found I had a knack for predicting how a song would affect others. It became a great outlet for artistic expression.

The thing I like most about St. Louis is... the great amount of culture and history.I lived outside of St. Louis almost as much as I lived in it. We have food here you get nowhere else, great live music and architectural styles from several different periods of expansion. St. Louis, for all its flaws, actually feels like a real city to me. I've lived in other large cities that did not.

The first vinyl record I ever bought was... Stoneproof - Everything's Not You (Quivver's Space Remix).

The most prized item in my music collection is... hundreds of hours of live sets from tons of DJs from the mid '90s until the advent of streaming audio on demand. Some of those sets were originally on cassette!

A record never allowed on my turntable is... commercial anything. I have respect for top-40 DJs -- don't get me wrong, the probably have it the roughest of all of us in terms of the crowds they have to read. I just can't bring myself to play that stuff. I had what was supposed to be a weekly gig at a top-40 bar in Omaha years ago. I quit after the second night.

The song that gets the best reaction when I'm performing is... Tiger Stripes' "Out of Phase." It's even a couple years old at this point and I still haven't heard anyone else play it. Kaiserdisco's "It's Like That" does well here for more house-y sets.

The strangest request I've ever gotten while DJing is... Any request is strange to me. From when I first started playing in San Francisco through my years in Britain, the DJ booth was simply not accessible to the public. When I came back to the US and started playing in Omaha, I would get people coming up and request hip hop at quite literally the only dedicated house-music venue in the city at that point. I had to ask if they knew where they were. Along those same lines I had someone vibing out, dancing for a good hour at one of my sets at Upstairs Lounge only to come up and ask me to play Drake. That was weird too.

The vibe in the room during my sets is usually... grooving. I really enjoy playing longer sets so I like to build the intensity over the entire time slot, usually pretty subdued at first gradually leading into something a bit more euphoric later. I particularly love sets where each track builds complexity and pace over the previous -- just a steady ramp up 'til peak hours.

My most memorable gig was... A lot of my sets in the UK were incredible.I played bi-weekly at a club that held 1,500 people. That level of energy in the room is amazing!

One person to watch in the St. Louis music scene right now is... St. Louis has a surprising amount of talent in house and techno. The talent farexceeds the size of the scene. If I can only pick one it would be Tony Bove, known as T\LEC. He's got some great mastering, production and DJ chops and his "Napalm" parties have brought in some very big names. He's daring to elevate the deep/tech house music scene in St. Louis and that's exactly what we need.