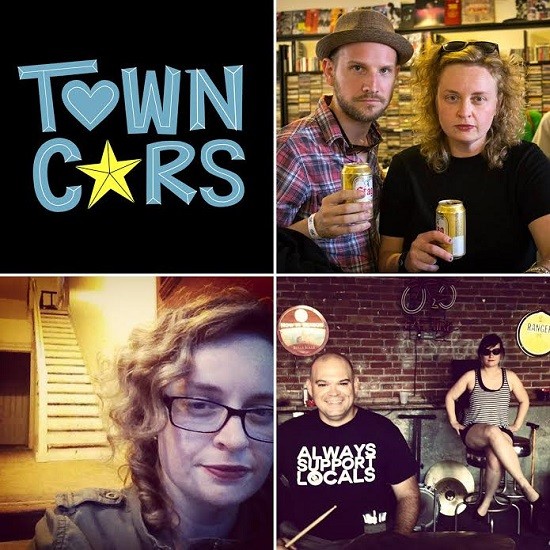 If you've been to a local show over the past few years, you've likely seen Melinda Cooper play. She's performed with the likes of Union Electric, Humdrum, Cassie Morgan & the Lonely Pine, Celia's Big Rock Band, and most recently (this past Friday, in fact), as an auxiliary member of Bruiser Queen. Despite this pedigree, Cooper has seldom performed her own material. With Town Cars, however, she has stepped into the lead. Over the past couple of years, Town Cars has played around the city with a revolving lineup, generally including drummer Corey Woodruff and keyboardist/vocalist Jenn Malzone (better known as the leader of Middle Class Fashion). This week, Town Cars releases its debut CD, Hearts and Stars, on its own Extension Chord label. It's a solid, to-the-point listen, with a sound steeped in everything from 1990s indie rock and 1970s singer-songwriters.

Town Cars celebrates Hearts and Stars with a listening/release party this Saturday, October 11, at the Tick Tock Tavern. Cooper and I met at her rehearsal space deep within the Lemp Brewery complex to discuss Town Cars, as well as her own upbringing and musical past.

Mike Appelstein: You are known primarily as a band member as opposed to bandleader. Have you always written your own songs?

Melinda Cooper: Well, my first band was with two of my friends. Tops Queen was the name. We all wrote songs together. Brad Vaughn and I played in A Bit Shifty; I think we had thirteen musicians coming in and out of it. I've been writing steadily ever since, but if you and your songs don't fit into projects, you find a place for them or put them to bed. When we first started playing out, it was just me, and then Jenn [Malzone] started playing along. Jenn really got me motivated to play. She'd say, "You need a place to put these songs." Later I met Corey. We joke that he's the only other full-on member and I'm selfishly staking a claim.

When did you first start playing?

I started playing piano when I was four years old. I learned the beginning of [Bette Midler's] "The Rose." I'm from Granite City; Brad and I both went to Granite City High School. My family was part of Assembly of God, which is like Pentecostal without the rules. Women can wear pants. We could trick or treat and read Lord of The Rings. You can't really go to the movies. It's basically humans making up their own rules.

But you did have music in your house?

My two older sisters and I were required to learn to play the piano. Our music pastor at church was also our piano teacher. I asked him how to play the electric guitar. He had a bass, which I still play. He told me that if I take it home, bring it back for the next week's lesson and play a song on it, I could have it. We had a steel guitar in our church, but it was mostly keyboard and piano. Whenever someone in the band didn't show up for that service, I would fill in. I learned to play the drums that way.

I had some great experiences [at church]. My music pastor has become a good friend. My cousin, who actually passed last week, gave me my bass amp. I was a teenager when I started playing the bass, and the pastor gave him that amp. My bass belonged to a deacon's daughter who was caught with another girl in the church. So she was shunned at the church, and they kept the bass. I have all these pieces [of equipment] that are so significant to me.

So at what point did you discover music that was yours, outside of the church environment?

I loved Bette Midler and Barbra Streisand at first. I remember hearing ABBA's "Take a Chance On Me." That was when I was pretending my sisters and I were in a band. I wanted to be the one writing music and playing, and I wanted my sisters to be the singers. One of my sisters is actually a great singer, and the other's a great pianist. But I discovered punk rock through Jim Utz. He worked at Vintage Vinyl when they had a store in Granite City.

How did you know about Vintage Vinyl?

Well, it was next door to the Ponderosa Steakhouse. Every Sunday afternoon, after church, we'd go to the Ponderosa. I'd ditch my family and visit Vintage Vinyl. Jim introduced me to bands like Excuse 17, and I discovered bands like Lush and Helium. Also, 120 Minutes was happening, and my best friend since age twelve loved all the same stuff. She was obsessed with the Lemonheads. We'd just go to Vintage Vinyl and look at records. Jim would encourage me to explore record labels. So I'd hear a band like like Small Factory, look at what label it was on, order catalogs and get them weeks later in the mail. That's how I discovered labels like Kill Rock Stars, Candy-Ass and Chainsaw. 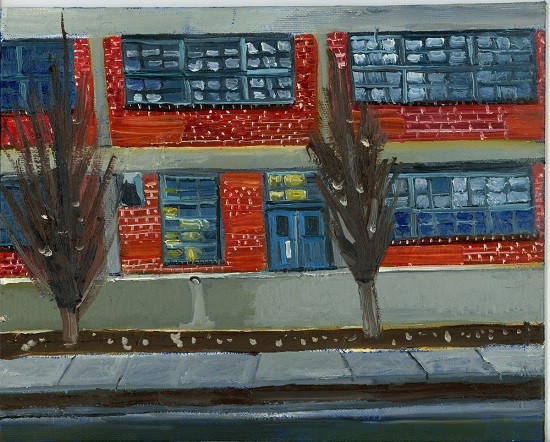 What was your first show?

The first show I can remember seeing was Sandi Patty at the Fox Theatre when I was twelve years old. She asked all the kids to come up on stage with her, and I got to go. My first secular music show was Bette Midler at Riverport, 1994. Around the same time, I saw Lush at Mississippi Nights with Weezer opening. And I saw Lollapalooza two weeks after that.

When did you start playing out for real?

There was another friend of mine, Dana Michael Anderson. Dana and my friend Greg were playing together, and I started playing with them. We were called Delmar Sessions. I remember playing a million Wilco covers. I've played [Uncle Tupelo's] "Gun" on every instrument. We played the Stagger Inn a few times. Then my old friend Brad Vaughn came back on the scene. As soon as Dana quit, we became A Bit Shifty. We recorded a terrible album at Art Lofts at 1500 Washington. Washington Street was abandoned at the time.

What period of time do the songs on Hearts and Stars cover?

Well, the drums over there belong to Paul, of the song "Paul's Party." He left my old practice space in 2004. So that song is about ten years old. But "End All Be All" I just wrote last year. I recorded the whole album myself: the drums, guitar, everything. A few things in there Kevin [Buckley] did, but I did it all and it's exhausting. But I really felt that I wanted to do it all myself for this first one. It's my songs, my effort, and kind of a test to see if I could actually follow through with it.

When Jenn and I first met, we played together a lot. We would turn her songs into rockier songs. I'm working on another one, a castaway that her other hand really doesn't want to do. She writes solid gold. I just reinterpreted "Summmer," and I also covered [Middle Class Fashion's] "Everything."

How about the Kostars cover?

I loved Luscious Jackson. Their lyrics were terrible, but they were such a good band. Jill Cunniff is just amazing, and Vivian Trimble is a great songwriter.

Do you have other songs you're working on?

Well, I recorded four songs for the album that didn't make it. I'm planning on making those a separate EP. I only wanted ten songs on the CD. Actually, I cheated, because there is an eleventh song at the end. It's made up of four or five different songs that I loved. The chord progression is "Lucy in the Sky with Diamonds." Then I borrow a little from "Bulletproof" by Radiohead. There's some of "The Trouble With Me" by Lois. And some Lemonheads: The lyrics reference "Hannah and Gabi." These are all songs I played in my first band, Tops Queen.

How do you come up with melodies? Is there a specific process?

It really just kind of happens, you know. I write a lot starting with the drum kit. I'll hit Garageband and start with a beat, and start singing while it's playing. Then I'll come back later.

How do you feel about St. Louis as a supportive musical community?

I think we could use some more professional studios. It seems to me that those who do have them are spread a little thin. Overall, we've had great venues to work with. People like Mike Cracciolo [the Firebird, Ready Room] and Steve Pohlman [Off Broadway]: These are great people and I want them both to thrive. We do have a network of support. Nobody's really mean to each other.

I'd like to tour more. With Union Electric's schedule it's hard to do, but Corey and I have both pretty open schedules. I do want to finish the EP. I'd like to get a good group going. I want to play with people who are better than me and never stop learning.