Kenneth Woods, artistic director and principal conductor of the English Symphony Orchestra in Worcester, England, recently penned a piece for his popular A View From the Podium blog on the subject of the protests that took place during Saturday's performance by the St. Louis Symphony at Powell Hall. Woods, who got his start in the United States, has worked with a plethora of well-known orchestras during his career including the Oregon East Symphony, the Cincinnati Symphony, the National Symphony Orchestra and more, receiving accolades from publications such as the Washington Post as well as the respect of many of his peers.

"I wasn't there, obviously, but I'm inclined to say the protesters did the right thing," Woods says in the piece. "Certainly that their actions, to me, seem both justified and appropriate." 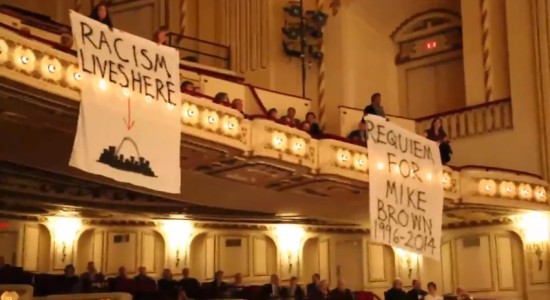 Woods continues, explaining that the classical music was once thought of as the most political of art forms, and pointing to many examples of politically motivated works throughout history:

Beethoven wrote the Eroica in support of Napoleon's struggles for liberty and freedom from an oppressive monarchy. When Bonaparte crowned himself emperor, Beethoven famously scratched out the dedication to the fallen hero. Wagner may have been a toxic soul, but he was deeply engaged in political ideas and clearly saw his music as, among other things, an instrument of social and political change. Sibelius's music helped fuel the Finnish struggle for liberation from Russian occupation, and Verdi's helped bring together Italy into a modern and united country. Mozart's three great operas based on libretti by Lorenzo Da Ponte were provocative and highly controversial political statements questioning the birthright of the ruling class, the inherent nobility of the noble, and the wisdom and decency of those who rule.

He also argues that although shared public spaces -- such as those concert halls at which symphonies take place -- should be safe and inclusive, that shouldn't stand in the way of important social and political discourse:

If the concert hall can't be the center of civic life, a hub for intellectual discussion, a place to share ideas, a place we can mourn, cry, scream, love and heal together, we may as well burn every concert hall to the ground. When we value genteel niceties and professional convenience over the existential questions of right and wrong, life and death, we, as artists, have probably made ourselves completely irrelevant.

The whole piece is thought-provoking and important, and certainly worth your time, as Woods stresses the need for empathy and the artist's place in trying times:

If this week's protest helped anyone to listen to Brahms's music with more empathy, to think about the value of Mike Brown's life and the loss being endured by his family, I think that's a positive thing. If the performance that followed the protest could have given some solace to Mr Brown's family or the survivors of any of the many violent deaths plaguing our society, that would have been a wonderful thing. If we can't agree that killing is wrong, that violent deaths are always a tragedy, what hope do we have?