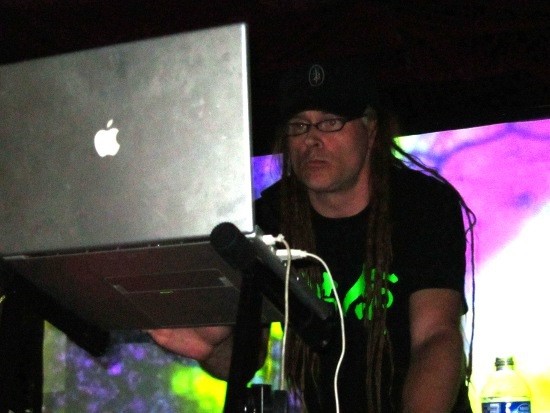 Recently, Facebook started a merciless crackdown on users who don't use their real names on their personal profiles.

As a result, numerous drag queens and musicians have had their pages taken down.

Though they've fought back, it doesn't look like Facebook is going to budge. So now in solidarity, the creative community and performers from across the spectrum have taken up the cause, with some announcing plans to quit Facebook altogether. It could be the beginning of an exodus.

Cross-dressing performers, of course, tend to have colorful, obviously fake stage names. They often have fan pages, but tend to use their drag names on their personal profiles as well.

A couple weeks ago, a number of them from San Francisco (including Heklina, Sister Roma, BeBe SweetBriar, and Lil Miss Hot Mess) met with Facebook at its Menlo Park headquarters. Facebook agreed to give them a two-week grace period to switch over to their real names, or have their profiles removed for good.

This wasn't much of a concession, says Steven "Heklina" Grygelko, best known for SF and LA club Trannyshack. "They trotted out their gay and transgendered employees who said they understood our feelings but that they had this policy for a reason and they weren't going to capitulate," he said. "They claim it has to do with stalkers. They don't want stalkers to hide behind fake names. But their policy is so flawed."

No one wants to be stalked by someone using a fake profile, but choosing a pseudonym in itself can be a way of avoiding stalking and harassment. From gay bashers to ex-lovers to family members who don't understand certain lifestyles, there are countless reasons not to use one's real name.

And it's not just drag queens or people trying to hide: Countless DJs, musicians, and artists make their livings off their personas, personas they create and market by a chosen moniker for a reason.

DJ and radio host Howie Pyro, who's played with Johnny Thunders, Danzig and D Generation, was locked out of his account recently and says he felt violated, "I've been using this name for over three decades. My mother calls me Howie Pyro," he says. "I've had this page for several years. I've made contacts on it, shared things on it that are only there and I promote myself and get jobs from it."

Pyro adds that the worst part is the social network's lack of communication. "It was an automated window that popped up. There was no one to voice concerns with or contact given to dispute this with," he says. "They held my information hostage and I was forced to give them what they wanted."

After switching over to his name Howie Kusten, he did get his page back a few days later. He shared his frustration on the site along with a profile picture that read,"Hello My Name is Howie Pyro- No matter what Facebook says." Soon after, a petition to stop the change started going around as well as a hashtag campaign, #mynameis. 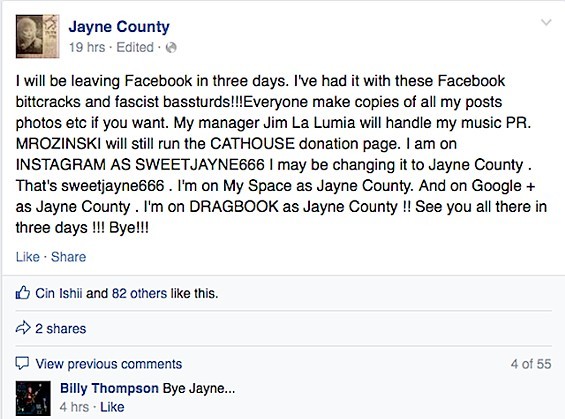 Transgender punk icon Jayne County announced this week that she will shortly be off Facebook permanently. In solidarity, many more seem to be following her lead.

Maryiln Manson's Jeordie White -- who goes by Twiggy Ramirez in the band, but uses his real name on the site -- posted a goodbye Facebook note yesterday as well.

While many entertainers will grudgingly stay on Facebook (at least until something better comes along) the vibe on the site these days is overwhelmingly negative. And the general consensus is that Google+ and the revamped Myspace aren't very good alternatives.

A new social platform billing itself as the anti-Facebook, called Ello, is getting a lot of buzz and seems promising, but it's still in Beta mode.