Six Ways To Avoid Getting Robbed On Tour

Although musicians are infamous for walking out on bar tabs, trashing hotel rooms and hijacking chuckwagon sandwiches from gas stations, there is one thing they deserve: the ability to torture society with their particular brand of art. Sadly, it happens all too often that bands' tours are derailed or altogether cancelled as a result of the actions of opportunistic criminals. St. Louis has seen a rash of incidents lately wherein bands' vans have been broken into and looted of their valuables. Most recently, reunited Texas emo band Mineral was taken for thousands of dollars worth of stuff after playing a show at the Firebird in St. Louis.

While it's likely that artists will continue to be the targets of such a devastating crime, we've come up with a few helpful suggestions to prevent bands from being robbed on tour.

6. Let A Derelict Grindcore Dude Live In Your Van

Everyone knows this guy -- and if you don't, you're actively avoiding him. Fortunately, by providing a grimy grindfreak a place to crash and a way to travel around, you've created the most loyal and foolproof way to guard your belongings. Any intruder of your vehicle will find themselves encountering a flurry of drunken punches and shivs made from fast food utensils. The only real drawback of keeping this guy around is the musky smell and constant demand to listen to bands with names like Bathtub Shitter and Paracoccidioidomicosisproctitissarcomucosis. But hey, you're on tour, so chances are you already smell and are listening to awful music anyway.

5. Be A Stupid Hippie Band

Honestly, I try my absolute hardest not to listen to awful music, otherwise I'd have a better description than "stupid hippie band" -- but you know the kind of band I'm referencing. It's those bands where people wear overalls and play music that basically sounds like Hootie and the Blowfish with a homemade banjo but without any irony. Anyway, you'll be completely safe on the road, as no one will want to steal your worthless jugs, stupid tub bass and cherished drum-kit made from a barrel, some pie tins and two five gallon buckets. However, someone might decide to torch your van just to get you guys to stop touring.

4. Put Ten Strips Of Acid On All the Headrests

If someone wants something bad enough, they're going to take it. At least this method ensures that if someone wants to steal your entire van, you'll have the last laugh as your gear predator descends into a spiraling vortex of psychedelic madness. Who knows, maybe they'll uncover some sort of deep-seated psychological trauma that's been holding them back all their lives, compelling them to return your stolen items in an effort to become a better person. Or maybe they'll become a glass of orange juice and spend the rest of their lives in a hospital, begging people not to tip them over.

3. Park the Van Inside the Venue

If you're a musician, then you already know that you're the most important person in the world. Social workers for homeless veterans, surgeons that repair facial deformities in children -- sure, they may have noble professions, but do they create culture? Have they ever written a song like Imagine Dragon's "Radioactive" or "Rude" by Magic!? Needless to say, even though they may be on your side, the owner of the club should certainly be disregarded as another inferior being. So go ahead and park that big bad boy van of yours right inside of the club for safekeeping. You're so important you can order all of the club's security to personally defend your van from potential invaders. If they complain, just give them a tip of your fedora and offer to autograph one of your turds that you keep in your vest pocket. 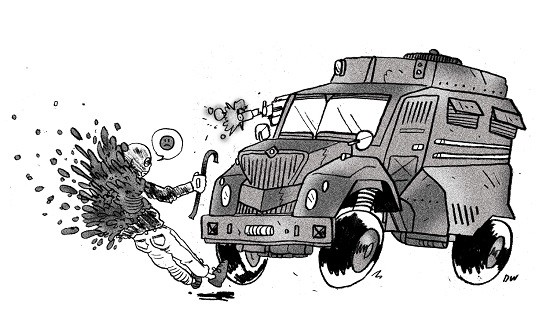 2. Purchase An Armored Vehicle From the Government For Cheap

According to an article in Newsweek, police in Watertown, Connecticut, were able to purchase a Mine-Resistant Ambush-Protected (MRAP) vehicle for a cool $2,800. So evidently even your crummy band can roll around in militarized style like the cops in Ferguson do for a fairly affordable price. While you're likely to defend your musical gear under any circumstances, you'll have a hard time defending your band's newfound reputation as a bunch of total assholes.

Put broken Christmas ornaments in the sun visor. Rig up a TalkBoy to call your thief a pervert. Pour glue all over the steering wheel or even better, put tar on the gas pedal and grease on the brake pedal. Make sure everyone in the band has a pet tarantula that roams around the van freely. Buy some of those flamethrower guitars that Rammstein uses and wirelessly control them to torch your burglar's head upon tripping an alarm. And if all else fails, just wait around and hit them with a shovel.