The Best Concerts in St. Louis From September 15 to 21 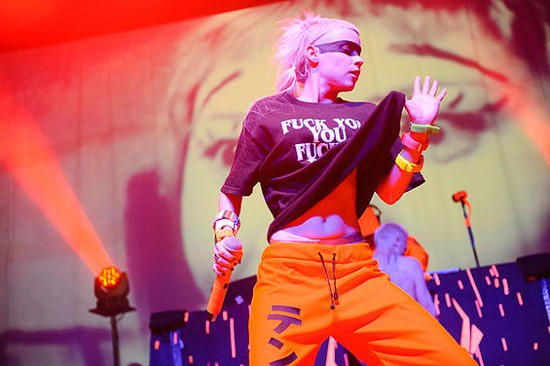 This week Hands and Feet releases an album, and plenty of touring artists make way through the Lou. Check out the Black Lips at the Ready Room, Die Antwoord at the Pageant, Lee Fields & the Expressions at 2720 Cherokee and much more. Read on for this week's picks from our critics.

Black Lips Monday, September 15 w/ The King Khan & BBQ Show @ The Ready Room 8:30 p.m. | $20 By Daniel Hill From this 2014 review: It was just after 10 p.m. when the fog machine began belching clouds and the house music was cut. As the members of Atlanta, Georgia's Black Lips took the stage, cheers erupted from the near-capacity crowd at the Firebird. Lead guitarist Ian Saint Pé was the first to speak. "Remember now," he began. "If it's perfect, it's not rock & roll. Let's go!" The statement proved prophetic and made clear where the band's priorities lie.

Die Antwoord Tuesday, September 16 w/ DJ Billy Brown @ The Pageant 8 p.m. | $29.59-$34 By Cassie Kohler Prepare yourself for a huge dose of "What the hell just happened?" as Die Antwoord's surreal experience shocks you out of the dull existence you call life. The South African bizarre-hop duo of Ninja and Yolandi Vi$$er meld hip-hop, heavy beats, English and Afrikaan into the twisted creation of "zef" culture. Fermented and fed for years in a search for self-expression, zef is the culmination of Ninja's journey, a culture of screaming visuals, boisterous and abrasive attitudes, hip style and gold chains. It is being poor but looking fly. Zef is Ninja's artistic voice. Plus, you're bound to see Yolandi's ass and Ninja's phallic windmill, so that will be fun too.

Iron & Wine Wednesday, September 17 w/ Jesca Hoop @ The Pageant 8 p.m. | $25 By Christian Schaeffer Fans of Iron & Wine's earliest releases -- spare, fingerpicked folks songs that showcased Sam Beam's heavenly self-harmonies -- have had to contend with many evolutions of the outfit. In the ten-plus years since he found an audience, Beam has pushed his folk roots to encompass ethereal jazz and Southern soul sounds as well. But if listeners felt mild anxiety at the pop sheen of 2011's major-label debut Kiss Each Other Clean, all was forgiven when the slinky verve of last year's Ghost on Ghost paired Beam's always-evocative lyrics with a backwoods groove. Jesca Hoop, whose latest LP Undress features a duet with Sam Beam, will open the show.

NOiSE Thursday, September 18 w/ Alex Cunningham, Beauty Pageant, Dave Stone, Eric Hall, Stone Hen, Willis @ Blank Space 8 p.m. | $ free By Joseph Hess From "The Best St. Louis Noise/Experimental Concerts: September 2014": Shows with the designation "NOiSE" (the lowercase "i" is a distinguishing feature) have more of an "anything goes" vibe than typical experimental outings. Starting in 2012 as a year-long installation at the old Mushmaus warehouse/art space, the series returned midway through 2014 with much of its former glory: Late nights, lots of bands and insane live video art by Chad Eivins of Chizmo.TV.... Local artist Mr. Ben conceived the series in 2012 as a way for one large pool of people to congregate and collaborate monthly. Watch the progression, or regression, depending on your outlook.

Hands and Feet Album Release Friday, September 19 w/ CaveofswordS, Hylidae, Laydeefish @ The Heavy Anchor 9 p.m. | $5 By Joseph Hess Hands and Feet feels especially distinct, owing to sole-member Stephen Favazza's talents as a multi-instrumentalist. Although he works under the guise of electronic pop, many of his samples stem from home recordings of keyboard, bass, guitar and melodica. Songs are built though sonic manipulation and live performance -- an interweaving force of aural bliss. Although Hands and Feet is a solo endeavor, Favazza often performs with live projections via video artist Caitlin Funston. Since the start of the project in 2010, Hands and Feet has released one self-titled full-length and a seven-inch entitled Hello, Hello.... EP. This night will see the debut of Favazza's first vinyl LP, Sour Times.

Joe McPhee Friday, September 19 w/ Fred Lonberg Holm, Michael Zerang, DJ All Soul No Borders @ Joe's Cafe 8 p.m. | $10-$15 By Joseph Hess From "The Best St. Louis Noise/Experimental Concerts: September 2014": Calling Joe McPhee's Survival Unit legendary would be a cop-out. After all, being told that anything is legendary sets up unrealistic expectations -- but what about the rare case when something actually lives up to its reputation? Survival Unit III, featuring Joe McPhee, Fred Lonberg-Holm and Michael Zerang, brings the utmost in acoustic free-jazz. The songs here feature a heightened sense of urgency, but the speed and high volume don't detract from the quiet subtleties. These points only speak to the band's massive range.

Spoon Saturday, September 20 w/ EMA @ The Pageant 8 p.m. | $30-$34 By Christian Schaeffer Four years might seem like a blip to those of us shuffling toward middle age, but it's enough time to get a college degree or for several musical styles to jockey for a brief moment of prominence atop the indie-rock slush pile. So Spoon's four-year hiatus from the New Release section passed without much clamor (Britt Daniel kept busy with the Divine Fits, among other excursions) but with enough time to make us miss a band that defined smart, well-tailored rock & roll. This fall's They Want My Soul delivered on the promise of its best (but not necessarily most recent) records -- tart-tongued kiss-offs matched with inventive, shape-shifting riffs that are as catchy as they are biting. EMA, the acronym-de-rock of Erika M. Anderson, will open the show and presumably draw from her most recent techno-phobic LP, the Future's Void.

Lee Fields & the Expressions Saturday, September 20 w/ Big Brother Thunder & the Master Blasters, Hal Greens @ 2720 Cherokee 9 pm. | $20-$30 By Roy Kasten Even when measured against the remarkable resurgence of classic soul performers like Mavis Staples, Charles Bradley or Charles Walker, Lee Fields' late-career recordings serve as potent reminders of the talismanic power of the music that once earned him the now-discarded nickname of "Little JB," a reference to the great James Brown. On this year's Emma Jean, Fields holds nothing back, singing against the years which have singed but not scarred his voice, embracing the pure physicality of funk and the pure emotion of a lover's plea. His band, the Expressions, give that voice all the room it deserves, while Fields' songwriting distinguishes him as a soul man for these or any days.

The Fixx Sunday, September 21 @ Blueberry Hill 8 p.m. | $27.50/$30 By Rob Levy From this 2012 show review: At a time when many new wave bands are reforming just for the sake of cashing on nostalgia the Fixx is having none of that. Thanks in part to their energized fanbase, the Fixx continues to tour with the same spark and passion it had "back in the day." While frontman Cy Curnin has aged since the '80s, his voice shows no signs of wear. The rest of the band is not too shabby either. James-West-Oram remains a greatly overlooked guitar player and Adam Woods drumming perfectly frames the band's textures. Dan K. Brown is a solid bass player whose licks make their tunes so memorable while keyboardist Rupert Greenall provides an ample amount of atmospheric heft to their sound.