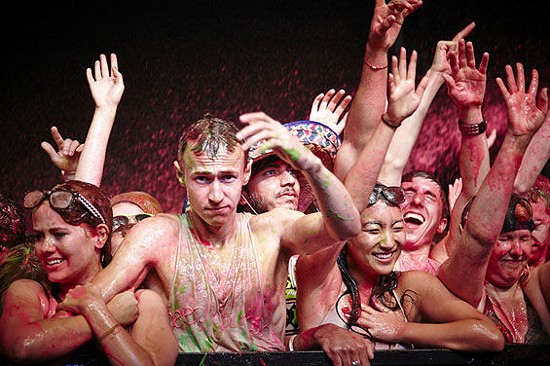 It's a busy weekend for music in St. Louis, so get out while the weather's nice. The St. Louis Symphony, New Music Circle and HEARding Cats Collective all kick of their new concert seasons with noteworthy shows. Additionally, artists Pokey LaFarge and Ian Fisher each have special homecoming shows. Plenty other options await this weekend. Read on for our recommendations.

The Afghan Whigs w/ Joseph Arthur @ The Ready Room 8 p.m. | $25 If you haven't taken the time yet to check out Do to the Beast, Afghan Whigs' first new record in sixteen years, you should probably get on that. Greg Dulli and Co. still got it; this is going to be a great show. (DH)

Pujol w/ Dad Jr., Shitstorm @ Off Broadway 9 p.m. | $10 You know and love him by now, and he loves you back, St. Louis, as clearly evidenced by the frequent stops in town. Head to Off Broadway and love each other. (DH)

St. Louis Symphony @ Powell Symphony Hall 8 p.m. | $30-$109 St. Louis Symphony's opening weekend features Brahms' Piano Concerto No. 1, amongst others. Get the full program via the St. Louis Symphony website, and be sure to check out the season schedule while you're there. It features several classics, as well as plenty of fun shows for the family -- "Pixar in Concert" and music from Star Wars, just to name a couple. (MS)

Also on Friday, New Music Circle kicks off its new season lineup with Thumbscrew at Joe's Cafe, and Pokey LaFarge brings his tour to Old Rock House. Click the links to learn more.

1917 Soundtrack CD Release w/ Mic Young, Charlee Marlee @ Utopia Studios 9 p.m. | $8 If you haven't checked out Utopia Studios' new music venue the Mecca yet, now's your chance! This show features 1917 Soundtrack, a neo-soul and R&B group. Check out some of their sounds on Bandcamp. (MS)

Alex G w/ The Mhurs, Lions Eat Grass @ Billiken Club 8 p.m. | $5 Philadelphia's Alex G is a prolific pop-tinged songwriter, as evidenced by his lengthy discography -- much of what can be heard via Bandcamp. Check out this recent live video to get a taste. (MS)

Cardiac Arrest w/ Cardiac Arrest, Return, Hell Night, Grand Inquisitor @ The Firebird 8 p.m. | $10-$12 A tale of two Cardiac Arrests! Chicago death-metal CA and St. Louis hardcore CA perform together for the first time ever. Loser has to break up! OK, I made that last part up, but let's get real already. (DH)

Electric Pilgrim: Everyone is Everywhere w/ Sleepy Kitty, the Reverbs @ Public Media Commons 7 p.m. | free with RSVP There are lots of new, exciting things to check out at this event -- HEARding Cats Collective's latest season kickoff as well as the debut of Public Media Commons, a 9,000-square-foot outdoor arts space in Grand Center. Get your free ticket and read more about the event via the Nine Network website. (MS)

Zeds Dead w/ Cash Cash, Basscrooks @ Old Rock House 7 p.m. | $47 A Mad Decent joint, so you know what to expect. Feel the bass so hard your brain rattles out of your ears. Let it happen. (DH)

For more options on Saturday, check out Ian Fisher & the Present at Off Broadway or Steve Dawson's Funeral Bonsai Wedding at the Stage at KDHX. Miss Jubilee performs at Nathalie's on Sunday.