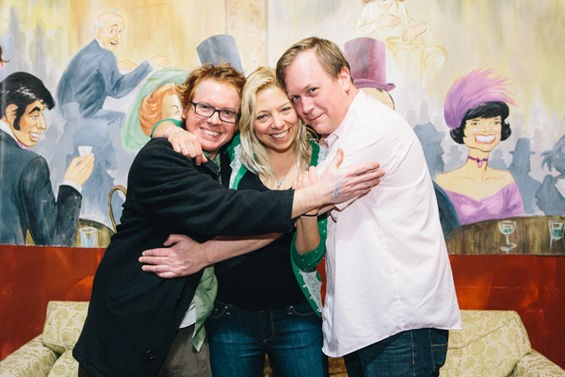 Over Labor Day weekend, Pancake Productions label head Rob Severson strapped on his trademark headset mic and began proselytizing to the crowd assembled at Feraro's Engine Room. The occasion was, ostensibly, a triple bill of Bunnygrunt, the Ottomen and Popular Mechanics, though Severson's spirited oration revealed the night's true intent: the unveiling of a years-in-the-making tribute album to Bunnygrunt.

That the album was a surprise to 'grunt lifers Matt Harnish and Karen Ried is both touching and impressive, seeing as Severson didn't have access to Harnish's Rolodex of indie-pop demigods and yet managed to wrangle more than a few for the comp. Columbus, Ohio's the Kyle Sowashes turn in a Boss-worthy "More Loves than Stupids," while Red Pony Clock's "Alone in My Principles" is lovably lo-fi. Other national acts that share Bunnygrunt's approach to wry but catchy pop songwriting show up here — Cars Can Be Blue, Normandie Wilson, Casper & the Cookies — and these appearances speak to Bunnygrunt's influence and status in certain bright, fuzzy corners of the pop world.

But a tribute to Bunnygrunt wouldn't be worth a damn without the band's hometown friends and followers, and You Wanna Be Just Like Bunnygrunt gives over half of its runtime to locals.

That sense of place is reinforced by Prune's take on "Mississippi," a sweet, R.E.M.-laced ode to St. Louis from Renee Dullum's brief tenure as bassist and vocalist that opens the disc. From there, the local bands choose songs that either fit their milieu or shape the songs in their image.

Popular Mechanics didn't have to do much to "S. Kingshighway Bubblegum Factory," one of Bunnygrunt's best and sturdiest songs, but the band leaves a mark on it with its trademark crunch and Hüsker Dü-ian buoyancy. Likewise, Union Electric's "G.I.2K" is a bit shambling until the snarling chorus kicks in. Middle Class Fashion, Jason Hutto and Severson's Googolplexia project all contribute, and despite the breadth of these 26 tracks, it's not hard to imagine an addendum to this tribute coming somewhere down the line — maybe in honor of Bunnygrunt's silver anniversary. I mean, how did no one cover "Southtown Famous"?

Stream the full comp below: