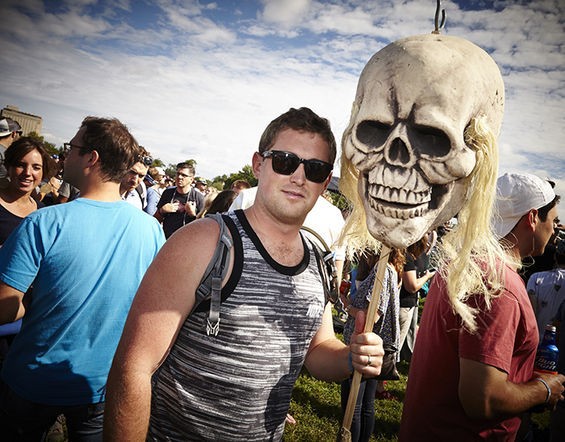 Another LouFest is in the history books! With 40-some acts converging on St. Louis' Forest Park for the two-day festival, St. Louis' music fans had plenty to keep them singing and dancing throughout this past weekend. 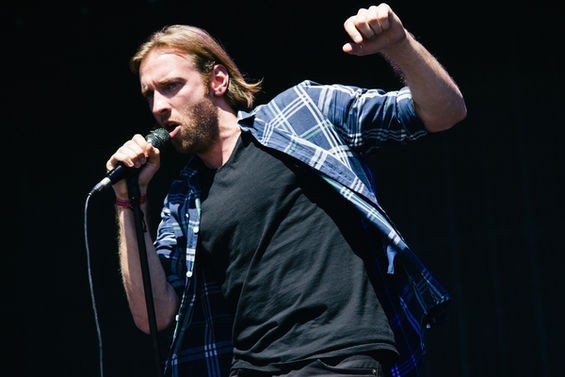 Things have been going well for Empires. Fresh off a Letterman performance in support of the its latest EP, How Good Does it Feel, the band is gearing up to release a new full-length entitled Orphan on September 23, just before heading south for a pair of early-October Austin City Limits dates. In the midst of all that, the Chicago quartet was kind enough to grace St. Louis with its presence for the second time this year. No stranger to St. Louis's smaller rock clubs, Empires was most recently in town back in March to perform at the 200-capacity Demo alongside local group Tidal Volume.

Of course, the setting for this weekend's performance was a little different than that last stop in town. It might have been reasonable to anticipate Empires' music feeling awkward and a little out of place in broad daylight on a Sunday afternoon. Reasonable, but wrong. In fact, the band's particular brand of anthemic, synth-accented pop-rock came across as tailor-made for the festival/stadium atmosphere.

Drummer Mike Robinson, guitarists Max Steger and Tom Conrad, frontman Sean Van Vleet and touring bassist Julio Tavarez (who also helped out with synthesizers and backing vocals) sauntered onstage about ten minutes after their-scheduled start-time and promptly got to work treating the crowd to a set of new songs from the yet-to-be-released album, squeezing eight into an only 35-minute set.

The straightforwardness of Empires' set -- composed almost exclusively of easily danceable, mid-tempo rockers -- made for a great way to ease into the festival's second day. Though the setlist was made up entirely of new material, the meticulously crafted songs gave a strong impression of familiarity, melding the sonic muscle of '90s alt-rock with the heartbreaking sentimentality of '80s new wave -- all the while retaining the nostalgic comfort of both. There were no surprises to be found here, but everything was in its place.

If you're looking for intellectual rock music, Empires is not for you. If, on the other hand, you enjoy simple, emotive pop tunes played powerfully, Empires may be right up your alley. The band's concise, uncluttered songs were impeccably well-rehearsed and sounded perfectly at home projected through the massive system.

If today's performance was any indication, Empires is far from the peak of its ascent into mainstream rock recognition.

As soon as Trombone Shorty & Orleans Avenue took the stage at 4:15 p.m. on Sunday, it was apparent that the crowd at LouFest 2014 was in for a treat. The six-piece band -- led by Troy "Trombone Shorty" Andrews and consisting of Joey Peebles on drums, Michael Ballard on bass, Pete Murano on guitar and Dan Oestreicher and Tim McFatter on baritone and tenor saxophones, respectively -- ripped through a set of music that sounded something like the funk-metal of One Hot Minute-era Red Hot Chili Peppers blended with the type of aggressive, muscular horn improvisations you might hear on an Art Blakey & the Jazz Messengers record.

Despite having a nickname which might lead one to believe otherwise, Andrews doesn't just play trombone in Trombone Shorty & Orleans Avenue. Throughout the course of the hour-long set, the multi-instrumentalist spent nearly as much time singing as he did playing trombone, and even picked up a trumpet for one tune about halfway through the set. In addition to his musical prowess (the dude sounds like he was born with a horn on his lips), Andrews is impossibly charismatic, rarely letting ten minutes pass without getting the crowd in on some kind of call-and-response or other audience interaction.

As great as Andrews sounded, it was the band that backed him up that truly made the performance. All excellent musicians in their own right, the members of Orleans Avenue have been playing together for nearly a decade, and it shows. Peebles' drumming was metronomically precise, and so, so, so grooving. Murano's rhythm playing was meaty and full, and he shredded like a guitar-nerd's wet dream when the time came to take a solo. McFatter managed to squeeze notes out of a tenor saxophone that would make Maynard Ferguson cock an eyebrow, and Oestreicher's bari sound would most accurately be described as "nasty." Bassist Michael Ballard, however, stole the show. Ballard's powerful sound, impeccable taste, and unshakeable groove provided the foundation atop which the rest of the group could build their self-described "supafunkrock."

With their unlikely melding of disparate genres and liberal quoting of songs from across the pop music spectrum (at one even point mashing up Green Day's "Brain Stew" riff with the melodic hook from "I'm Still Fly"), Trombone Shorty & Orleans Avenue might be a little too campy for some, but Loufest's Sunday crowd seemed ready to follow this musical odyssey wherever Andrews and company led.

Or, maybe it was because I had just had the musical bar for the day raised several notches by Trombone Shorty & Orleans Avenue. Granted, following Trombone Shorty and his band is no easy feat, but it became painfully clear early on in Cherub's set that the Nashville duo comprised of Jordan Kelley and Jason Huber simply wasn't up to the task.

As far as the division of musical duties go in Cherub, Kelley provides the majority of the vocals and all of the lead guitar for the duo, with Huber occasionally chiming in vocally. In addition to back-up vocals, the hour-long set saw Huber alternate between two different guitars (which came across more as props than instruments, since both were all but completely inaudible), bass and synths.

Kelley's lead vocals were consistently out of tune, almost unrecognizable as the sweet, smooth falsetto heard on the band's records, and while his lead guitar work was passable, it came across as dull and repetitive after hearing the articulate, energetic playing of St. Louis's own Pete Murano with Trombone Shorty. Huber's vocal contributions were well-executed, but unfortunately, the same can't be said of his instrumental work. Tempos fluctuated away from and back to the backing tracks when Huber picked up the sticks to play synth drums, and an abundance of minor mistakes brought his bass-playing into the realm of "distracting." Huber also appeared to be playing guitar throughout much of the set, but no corresponding sound seemed to come out of the speakers.

Just as present -- if not more so -- than the live sonic contributions of Kelly and Huber were the backing tracks that provided the remainder of the band's sound. Though the tracks were probably the most musically solid element of Cherub's performance, the sounds that composed them were, at best, unremarkable. At their worst, they way too closely resembled the factory presets on new gear that (badly) imitate sounds heard in better-funded Top-40 songs.

Overall, Cherub's LouFest set was a lackluster performance of songs that just weren't that great to begin with.