The Fall and the Rise of the Falls: An Interview With Singer and Songwriter Melinda Kirwin 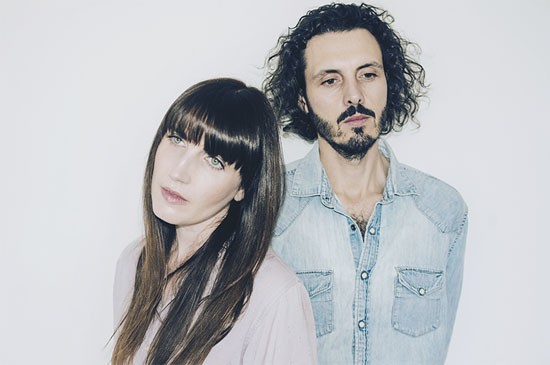 Into the Fire, the first release by Australian country-folk duo the Falls, didn't save the romantic relationship of Simon Rudston-Brown and Melinda Kirwin, but it did save their band. It's the best ending one might hope for, for what should have been an utterly doomed endeavor. The six songs -- originally released as Hollywood in 2012 in the group's native Sydney, and then re-titled and more widely distributed by Verve this year -- with their plaintive acoustic core, redemptive string sections and tender (as in bruised and singed) harmonies, both reflect and transcend their back-story.

Written and recorded as the couple was splitting apart, and splitting apart hard, the album isn't exactly Shoot Out the Lights brutal, but it has the undeniable quiver of truth, the unveiled emotions of what happens when love goes wrong, when trust, in yourself and in others, is burnt -- and just how real the hope feels when you make it through that kind of fire.

The Falls will appear at LouFest on Saturday, September 6, the band's second appearance in St. Louis and second festival date ever in the States this summer. RFT Music reached Kirwin -- who was in Omaha, Nebraska, working on a followup to the first EP with Saddle Creek Records producer Mike Mogis -- by phone to get the story behind the duo's music.

Roy Kasten: For someone who hasn't had the pleasure of visiting the country, can you tell me what your part of Australia was like growing up?

Melinda Kirwin: Where I grew up is what people imagine Australia to be. Simon and I had very different childhoods. I grew up in the bush where everything is dangerous and can hurt you. Simon grew up in the city. I grew up in a part of the world where there are crocodiles in the stream down the road, and snakes and spiders. I miss them. I get freaked out by the spiders here because I think they'll be poisonous, but so far none of them are.

I wanted to ask if you had a musical family, but maybe you were too busy fending off lethal creatures.

No one else in my family plays an instrument, but I've always had a feeling that my dad is quite musical. He grew up in a very isolated part of Australia, in the bush, and he never had access to anything like that. He often talks about a song he wants to get out. We need to get together and write that song and get it out of him.

Was there a singer that you looked up to, who inspired you?

Music has always been my thing. Simon and I met when we were studying music. As a singer I was a late bloomer. I was quite shy. I played the clarinet and studied classical woodwinds. When I met Simon we started writing these songs together; that's when I began singing. A singer I love and would aspire to be like would be Emmylou Harris. Simon and I were really inspired the way she and Gram Parsons sang together.

Was the initial connection with Simon creative or romantic?

It was creative. It's always been a bit of both for us. We never planned to write songs together, but being musicians living in the same space it happened on its own. We've been through so much together; we were a couple for a long time and then broke up just before we recorded our EP.

The title track, "Into the Fire," is a song of personal and romantic turmoil, but there's no blaming of the other person. It's very soul-searching, self-searching.

That's an interesting song because we can see the inspiration behind it. The record is reflective of what happened to the relationship and where we ended up. So there's a hopefulness to it; it's not about blame or anger. That song came very quickly and easily, and that's often the case with songs that connect with people. It's a song that I like to do just acoustically, just Simon and me and guitar; that's where the song started. That's where it feels like what the song is about, about the two of us. It's very personal for us.

The two things were so entwined. They were never separate. It wasn't until things became hard that we -- we never really made a choice. We were breaking up when we were finishing the record and getting ready to go into the studio. We had to decide if we were even going to make the record or not. But it was so far along that we decided to do it anyway. I'm so glad that we made the record; if we hadn't, the band wouldn't exist anymore. We literally pushed through the hardest part and kept writing and kept playing. It was really too late to pull out. It helped us get through the difficult part, and at the end we had a record we both loved. We would have been so sad to lose that as well. It would have been easier to walk away from everything. Now we're like family to each other. I don't think we ever imagined that we would end up here.