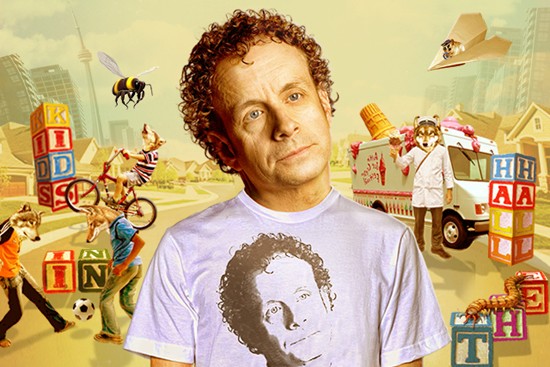 Bobby Jaycox, who came in just behind Kenny Kinds in this year's RFT Standup Throwdown, is hosting a monthly showcase at the Valley Park Funnybone, spotlighting the forerunners of the St. Louis comedy scene. If it sounds familiar, it is. He was the man behind the similarly formatted show at Jilly's Steak House in High Ridge.

This month features Jeremy Essig, who recently opened for Brian Posehn and comes back to town once a month to cohost Loser. A Live Action Shame Show at the Heavy Anchor with Chris Ward. Also on the bill is Standup Throwdown Final Four qualifier Emily Hickner, along with Frankie Chubb and JC Sibala. Each comedian is seasoned in their own right and offers a unique and individual style of humor. It's a showcase of the best, not the similar.

The Valley Park Funny Bone also has a couple of comedy veterans stopping by for special one-off engagements. Be sure to catch Louie Anderson on Friday, September 20 and Tom Arnold on September 12 and 13.

Until the Kids in the Hall Reunion (hopefully) makes its way to town, you'll have to catch the kids one at a time. Cofounder Kevin McDonald will be the featured performer for Storyteller, the Improv Shop's weekly storytelling event. Each Saturday is a unique show, with original stories told by a different guest every week.

If you don't recognize the name, perhaps his recurring characters the King of Empty Promises, Jerry Sizzle and Sir Simon Milligan could ring a bell. McDonald is also the voice of Pleakley in the Lilo & Stitch series and the Almighty Tallest Purple in Invader Zim. He has made a number of television appearances on cult classics and classics alike: Arrested Development, Seinfeld (Denim Vest!), MADtv and That 70's Show, to name just a few.

And for those of you who take a deeper interest in improvisational comedy and writing, Kevin McDonanld will be instructing a weekend workshop on writing sketches through improvisation. So whether you want to learn from the best or just see him live and in action, both opportunities are yours for the taking.

The Massage with Nick Swardson from Funny Or Die

The Taste It tour is the teaser for Nick Swardson's upcoming Comedy Central special that will be taped this fall. He's as much a threat behind the scenes as a writer and producer as he is onstage and behind only a microphone. If you're not familiar with his standup, his performance as roller-skating gigalo,Terry Bernadino from Reno 911! is a reasonable standard of weird to expect.

At the ripe age of 22, Swardson was the youngest comic to tape a half-hour special with Comedy Central. A few years later, Happy Madison Productions produced his album and DVD special Party after he wrote and starred in Grandma's Boy and Benchwarmers. There's no gamble with Swardson, which could probably be said of any comic booked at the Pageant. It will be a one-of-a-kind performance you won't see again until the aforementioned special airs. He's a good time, belly full of laughs guaranteed, so long as you're game to let things get weird.

Standing behind a guitar, Nick Thune could make a lady weak at the knees. He attempts to mask his dashing good looks these days with a pair of circular, thick-rimmed spectacles, but girls love a sense of humor just as much as they do a bearded jaw line. Unlike many musical comedians, Nick's talents with a guitar do not overcompensate for a lack of writing, or vice versa. His melodic tunes and soft-spoken delivery work together in perfect harmony. His performance dances on the edge of surrealism, so if you're more of a "choose your own adventure" type than a two-drink minimum comedy showgoer, Thune is the man for you. For a sneak peek, check out Folk Hero, his standup released by Netflix earlier this year.

Joining him on the In the Heartland Tour is Doogie Horner, who made it all the way to the third round during the fifth season of America's Got Talent, which is a feat in and of itself considering he had to shout his jokes over the audience boos during the audition. That aside, Doogie presents a similar style of comedy to Thune -- his set will likely indulge you in a hodgepodge of one-liners contrived from social faux pas and the embarrassing situations that coincide.