Local artsy/DIY duo the Funs has pulled off the unthinkable: a slot opening for its very favorite band, the Breeders. The Funs will play the first five dates of the tour starting tonight at Off Broadway and ending September 8 in Garden City, Idaho.

Alt-rock band the Breeders has a long history with St. Louis -- nearly always scheduling a tour date in the area to accommodate its huge fan base here. This allegiance was most pronounced when the band chose the Lou as a place to film a music video, borrowing our Arch Rival Roller Girls to use as its stars.

The two members of the Funs, Philip Jerome Lesicko and Jessee Rose Crane, have made a name for themselves as an uncompromising, inventive team. Last year, Riverfront Times writer Mabel Suen described the appeal of the Funs like this: "The resulting racket... blasts its way out through a tower of amps, a fuzzy, buzzy wall disjointed by sharp drumming. The two rotate roles between drums and guitar, both crooning through a reverb-drenched haze, floating flawed and fraught with inescapable feelings through outer space."

We contacted the members of the Funs and had a mutual Breeders gushy-love-session where they praised their new tour mates, expressed their excitement and explained their plans for the future. 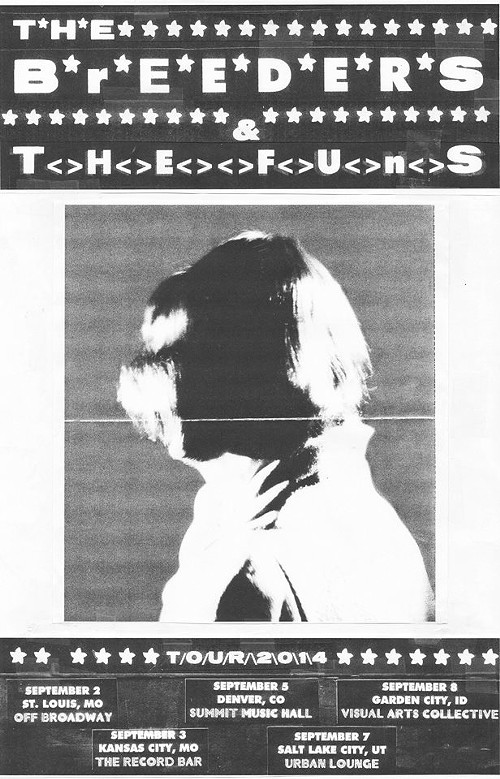 Jaime Lees: Tell me how you got the opening slot for the Breeders on this Midwest section of the tour.

Crane: Frank Sharp (Mr. Big) from Sharp Records contacted us from his limo and asked us to play.

Lesicko: I sent an email to an address that I thought might reach Kim [Deal, Breeders vocalist]. The Breeders are our favorite band in so many ways. I sent the email because we care about the Breeders, not because we want to open for a big band. They are one of the few bands that keep it real. And I respect them so much for that. When I received a response I felt... I don't think there is a word for it. I cannot explain how much it means to us to be able to tour with the Breeders.

Crane: No, really, Philip sent her a video; can you believe that? I can't. I never would have because I can't believe that this could happen. Kim reaches out to a lot of smaller bands; it's one of the billion reasons she's amazing. We don't have a booking agent or manager or a big label backing us. We done this all ourselves. We told her we could send more music if she wanted and she said no the live stuff is what matters and it's really good.

Now Philip can get away with anything for the rest of our lives because if we ever get in a fight, he can just say, "Remember when we went on tour with the Breeders?" and I'll shut up. It's un-fucking-real. Most people can't understand what a big deal this is to me. Unless you could go back in time and see me as kid falling in love with them and talking about them ad nauseum. I'm obsessed. Philip told me and I cried. We were recording at Public House Sound Recordings in Chicago when we got the call and I started to cry. I was just screaming and crying and it was raining and I went out in the rain in my sock feet and was screaming. I thought I was having a heart attack. I had a total meltdown in front of this recording guy, Dave, who I barely knew and he started tearing up I think. He's really the sweetest guy so it was cool. Really there are no words.

What are some of your favorite Breeders songs and why?

Crane: Well, for whatever reason, "Little Fury," the first song on Title TK always got me. The breakdown when she sings "Hold what you've got." I love that part, and it just starts so fucking raw. It's amazing. We actually covered that song once at a Halloween show in Chicago; we did a Breeders set. So that's on the internet somewhere. I'm dressed like a nun. "Off You" is one of the greatest songs ever written, hands down. The lyrics "I am the autumn in the scarlet / I am the makeup on your eyes." What? Too good. "I've never seen a starlet / Or a riot or the violence of you." Too fucking good. They just put "Off You" in that new movie Her and I heard it and was, like, woah that's weird. I would listen that song over and over and over.

Can I just say "Cannonball" is not even close to one of my favorites? And I'm not saying that to go against the grain, but it does annoy me that people are like "Oh, the Breeders? They have that song 'Cannonball' right?" And I'm like, "Yeah, and dozens of other songs that are amazing." All their albums are good. You should listen to them all. Oh yeah, back to the question: I love the song "Doh!" Because it's weird and oddly beautiful. She is seriously underrated as a songwriter and vocalist. Like, Kim is Bob Dylan and Billie Holiday. Name your biggest names. I don't care who they are, she is that.

Who do you consider your influences?

Lesicko: Honest, hardworking people in life, art and everything else.

Crane: Well, I think you know, maybe. The Breeders. They are really the only one I can count. Kim has always just been herself and stayed true to herself and who she is and what she does. She really cares about the music and recordings and I feel the same way. She has been a great inspiration to just keep doing what we do.

How do you describe your sound?

Lesicko: It is very intense, in a way that hopefully engages the audience in a positive way. We make music that is natural to us. We care about it. We don't try to do one thing or the other. Its an extension of who we are and what we are. It's not for everyone. But I think when people connect they really connect. If you are interested, we can easily be found.

Crane: It's hard, you know. People have told me more than once that we play emotion. That our songs sound like feelings more than musicians. I can agree with that. I don't consider myself a musician, for some reason. I would say I'm an artist though. It's innate, for sure, and all that "whatever" comes out. I don't think about it or analyze it. Our music is Philip and I's brains transformed into sound waves. That is what we sound like: fucking crazy brain waves.

Aside from playing live, what are some of your other projects?

Lesicko: We run a label called Manic Static. I put everything into that. We are rehabbing our home called Rose Raft in rural Illinois. It will become a residency for working artists and musicians in the not-too-distant future.

Crane: I make hats out of tin foil and glue and costume jewelry. You want one? I spend a lot of time with tin foil. I sculpt flowers out of plastic bags. I draw cats. I sew little dolls out of socks I call Peekers and sell them at shows, because I'm broke and am bad at money. And yes, I am turning my home into an artist residency. Rose Raft.

What are your plans for the future, band-wise?

Lesicko: The band will never end. We will always write songs together and record them. And I know that people out there dig them, and that is so amazing to me. We will be recording a new record this winter. We hope to have it out in the spring. Followed by non-stop touring.

Crane: I plan to keep making music until my life functions cease. So, lets say an album a year 'til that happens. I've been doing that a while now, and you are asking me these questions. We are going on tour with Breeders. As far as I am concerned, I don't need to do anything else with my life.