In Defense of Liking Music for No Good Reason 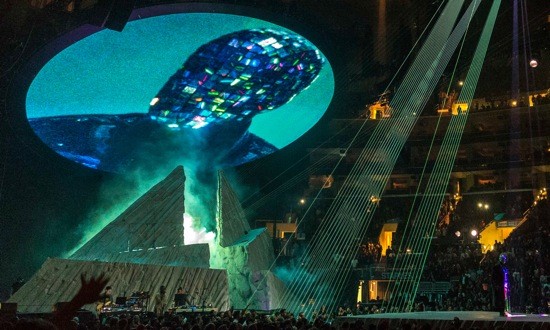 Why did you like Yeezus? Did you find it anarchic? Did you like how it challenged racial norms in a confrontational, blacked-out way? Did you like its minimalism? Or its maximalism? Did you find the songs to speak to a larger narrative of where Kanye West is artistically and emotionally? Did you appreciate the videos, or the bloodthirstiness? Did you enjoy the lack of singles and the punk narrative?

This is how you're supposed to like Yeezus. It's a cultural artifact that aims to be a cultural artifact, the sort of album that comes with mystical adjectives like "brooding" and "antagonistic" already equipped. The justifications for the acclaim were prepackaged in the marketing, and it only took a few pissed-off punchlines to sell the world that this, right here, was Kanye's blue period. A wildly experimental album that was sure to alienate listeners, and destined solely to unite the cabal of serious, resourceful music fans eager enough to journey into the dark world.

Except that didn't happen. Yeezus is still great, and you can still hear its songs at every club across America. It has not been critically divisive nor controversial. "New Slaves" fought its way all the way up to #13 on the rap charts -- that's not exactly Metal Machine Music. Why did you like Yeezus? Because despite all the hoopla over its apparent antipathy, it is still a deeply catchy record. We like catchy records. And it's high time we stop coming up with hoity-toity filler discourse to distract from our core attractions.

That doesn't mean any of other stuff about the album is untrue. Yeezus is undeniably charged with racial politics, and it certainly is drawing from a different musical palate than we're used to seeing from Kanye. In the multiple times I've returned to "Black Skinhead," I wasn't looking for a refresher on Black Panther politics. I just wanted to hear those dogs bark again.

It's the same affliction that's tarnished bands like Deerhunter or Arcade Fire -- both great, monumental rock bands that make great, unapologetic pop music. But that isn't enough, so critics dressed up Reflektor like it was a graduate thesis and Deerhunter is still being called noise-rock in the wrong circles. There's this feeling that we can't let the stuff we genuinely love bleed over with the stuff we secretly love. Loving "Helicopter" for its catchiness feels too much like loving Katy Perry for her catchiness. That sort of generality makes us queasy, so we do our best to build the barriers between those two schools the best we can.

But in our heart of hearts, we know that's a lie. We know Arcade Fire's "Afterlife" isn't much different from Adele's "Rolling in the Deep." So why pretend? Why hold biases? What are we trying to prove? There's this fear, rooted in the high-school quest of fitting in, that liking music for its catchiness isn't righteous and we need to have a better reason.

There are plenty of other reasons to like music, and those inspirations and projections are all totally valid and meaningful. But that doesn't change the fact that when we return to the source we're not consumed by any of those extraneous thoughts, we just want to hear what we like, loud and clear. The question of "why" we like something is always secondary to the raw physical response; catchiness can never be successfully articulated because frankly, that sort of biology doesn't translate well to paper. It's a fact that scares us. That music, something we've all spent a lot of time investing in, generally manifests itself in our synapses. We need a justification, and catchiness feels too shallow.

But that's not true. Acknowledging your fundamental enjoyment doesn't make you stupid; it makes you human.