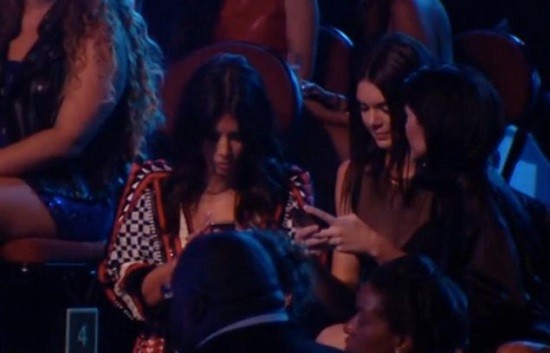 Before presenting the award for Best Hip-Hop Video at the 2014 MTV Video Music Awards this past Sunday, rapper Common spoke briefly about slain teen Mike Brown and the tension in Ferguson since Brown was shot by a police officer on August 9 before leading those assembled in a moment of silence.

"Hip-hop has always been about truth and has been a powerful instrument of social change," Common said. "From Melle Mel to Public Enemy to Kendrick Lamar, hip-hop has always presented a voice for the revolution. I want us all to take a moment of silence for Mike Brown, and for peace in this country and in the world."

The crowd switched from cheering to hushed silence at the rapper's behest. Snoop Dogg was spotted on video with his head down, throwing up a "peace" sign. Donald Glover, also known as Childish Gambino, was also shown by the cameras with his eyes lowered.

The Kardashian sisters, by contrast, took the opportunity to check their phones.

Kim Kardashian and her younger sisters, Kylie and Kendall Jenner, spent the time during which they were displayed on the award show's live stream irreverently fiddling with their phones rather than observing the moment with the rest in attendance. Twitter users were quick to catch this, and the criticism was instantaneous.

The Kardashian sisters just had to Google what #Ferguson is. #MTVVMAs2014

how Kardashian does a moment of silence pic.twitter.com/meAyLBQn0f

There is a whole feed online devoted to watching the Kardashian/Jenners look at their phones http://t.co/qKNp9Wdt7s pic.twitter.com/BBJG6958oB

Livefeed showed Kim adjusting her cleavage through that Common speech

A spokesperson for the Kardashians has claimed that these allegations are "completely false," and Buzzfeed has noted that it is possible that there was a lag in the footage on the stream. Nevertheless, that didn't stop the site from publishing more than one article about it. RFT Music has emailed a representative at MTV to attempt to clear up the situation; we will update this post if we get a reply.

Read the full remarks that Common made prior to the silence below.

For the past two weeks, the eyes of the nation have been on Ferguson, Missouri. The people in Ferguson and St. Louis -- and communities across the country -- have used their voices to call for justice and change. To let everyone know that each and every one of our lives matters. [Applause.] Hip-hop has always been about truth, and has been a powerful instrument of social change. From Melle Mel to Public Enemy to Kendrick Lamar, hip-hop has always presented a voice for the revolution. I want us all to take a moment of silence for Mike Brown, and for peace in this country and in the world.