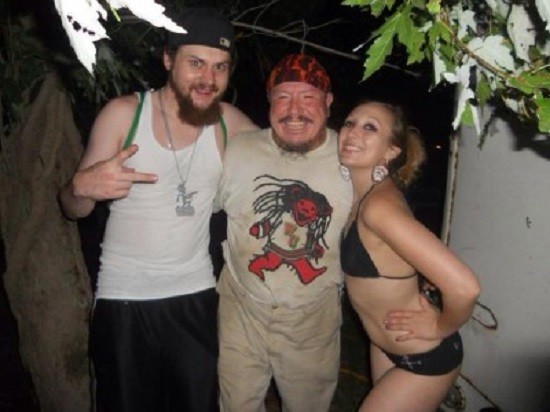 It is with sadness that we dutifully announce the passing of Jesus Ayala, known to many as the Burrito Man. At age 58, Ayala passed away from congestive heart failure.

As outlined in our 2013 article about the various foods present at the Gathering of the Juggalos, Ayala's food-truck-turned-covert-culinary-haven dispensed almost impossibly tasty burritos at a bargain price -- but only to those clever and adventurous enough to find its location, tucked away in the campgrounds of the festival.

See also: Juggalo Eats and the Quest for the Mythical Burrito Man

Ayala's friend and fellow burrito crafter, Bruce Wayne Hull, recalls the story of how they first ended up at one of the wildest festivals in the nation.

"He was at a motorcycle rally and some juggalo got to talking to him, and that's how he got hooked up with them eleven years ago," Hull says. "His first time was 2006. He's been to every Gathering since. He always told me he took right to them, and even the people I've talked to online since he's passed away said he was just family the first time he came."

Although the recipe for the deeply satisfying and perfectly spiced burritos came from directly from Ayala, due to his failing health, he recently entrusted the care of his creation to two dear friends whom we had the pleasure of meeting at the Gathering: Bruce Wayne Hull and Bill Huntsman. 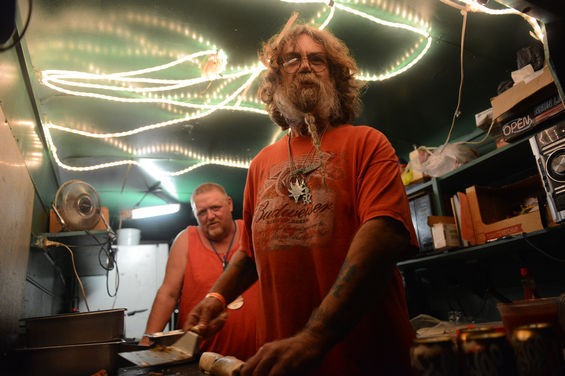 "Oh my gosh, the first time he asked me if I wanted to help him out with something, I asked him, 'With what?' and he goes, 'With my burritos and fajitas at a bike rally,'" Hull explains. "I said, 'Sure, I'll go.' I tell you, I was amazed at the stuff that I seen." But he says that while the biker rallies were a spectacle, he realized he should've been going to the Gathering all along.

After being hospitalized, Ayala gave Bruce and a friend from church power of attorney. As his health continued to deteriorate, Ayala was placed in hospice just before Memorial Day this year.

"We were at a Memorial Day weekend motorcycle rally, and he called the first night and asked how we did," Hull says. "Then he got to crying, and I asked him what he was crying about. He goes, 'Brother, I want to go home. I want to see my family and be with them.'"

From there, Bruce and Bill made a commitment to get Jesus back to Mexico. The oldest in a family of eleven children, Ayala hadn't seen his mother or any of his family in fourteen years.

"Bill hesitated a little and goes, 'Well, what are we going to do if he dies on us? Everyone says he won't make it far before he dies.' So I said, 'If he dies, he dies. I'll keep driving to Texas and find a hospital and say, 'Hey, my friend needs help -- I don't know what's going on with him,'" Hull said, chuckling to himself.

Determined and defying the odds, Jesus made it back to Mexico, where he was able to spend a week with his family before he was ultimately transferred to a hospice. He passed away peacefully on August 15.

Since the loss of the Burrito Man, his countless friends and fans, bikers and juggalos alike have taken to the Internet to publicly mourn. The Detroit rap group behind the Gathering of the Juggalos, Insane Clown Posse, took to Facebook to pay tribute to Ayala:

"Thank you, Jesus! We love you, ninja! Enjoy all that Shangri-La has to offer, big homie!"

"Goodnight, sweet Burrito Man. We love you, too. Here's to extra sour cream in Shangri-leezey, wishes granted and friends and family to guide your spirit home always."

Ayala's contribution to hungry misfits at music festivals and biker rallies everywhere will live on through Bruce Wayne Hall and Bill Huntsman, as they continue the legacy of his fine food.

"It's just gonna be us two. He left the truck and got it licensed in my name. He gave me all of his recipes -- we sat in the hospital for about seven or eight hours giving us recipes," Hull remarked. "He had to show me with little different sizes of canisters because he just grabbed and put it it in. He couldn't show me that, so he just showed me through containers. One recipe has fourteen things in it. The measurements range from 'water-bottle cap' to a cup."

Donations are being accepted for Jesus' six-year-old daughter, Emily. Donate through Paypal at fishingfool801963@yahoo.com. Those interested in eating some of the best burritos on the planet should be able to find the Burrito Man Truck at the Ferguson StreetFest, September 26 and 27.