On SZA, Ferguson and the "New Black" 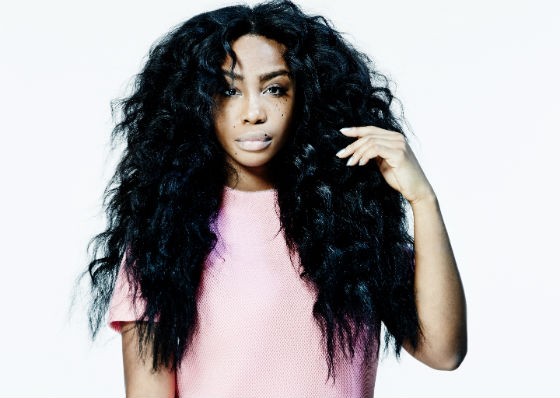 When Pharrell coined the term "New Black" earlier this year, he clearly didn't anticipate the backlash. Sitting across from billionaire Oprah Winfrey, riding the success of a worldwide No. 1 record and a couple of Grammy wins, the singer/producer was eager to dismiss the idea that being black had in any way put him at a disadvantage.

"The New Black doesn't blame other races for our issues," he explained. "The New Black dreams and realizes that it's not pigmentation: It's a mentality, and it's either going to work for you or it's going to work against you. And you've got to pick the side you're going to be on."

Within days there were memes, articles and hashtags like #whatkindofblackareyou, calling out the implication that black people are responsible for their disenfranchisement, that the real problem isn't institutionalized racism but negative thinking. And just like that, "New Black," likely intended to be a positive, revolutionary declaration of 21st century blackness, became a kind of shorthand for the post-racial Uncle Tom, enthusiastically applied to the Don Lemons of the celebrity landscape.

The most recently accused is SZA, native St. Louisan and First Lady of Kendrick Lamar's music collective TDE. Known for ethereal jams like "Babylon" and "Warm Winds," the 23-year-old singer has made a name for herself as part of the doom-soul movement that includes artists like Kelela and FKA Twigs. Last week, with the aftermath of Mike Brown's death and reports of tear gas and rubber pellets reaching their height, she sparked a heated online debate when she took to her various social-media platforms to weigh in.

It started, as most things do these days, with a tweet: "Why instating Martial Law in a situation plagued with police brutality makes sense to you is beyond me," adding the tag, "#thisisbeyondrace." On her official Tumblr page, she posted a picture of a white woman being kicked in the head by a policeman (taken in 2012, in Rhode Island), with the caption, "This is deeper than color."

Almost instantly, the singer began receiving hundreds of angry messages, retweets, and reblogs from black fans taking issue with her seemingly arguing that the police brutality and excessive force used against the peacefully assembled citizens of Ferguson have nothing to do with the fact that they are predominantly black.

"The officer [in the photo] was put on unpaid suspension, eventually resigned from the force and convicted of felony battery with a dangerous weapon," one Tumblr user replied. "[Ferguson] police have been illegally arresting people and not telling them why and they still aren't answering questions about the shooting. So, tell me, you sing-sighing on the track ass bitch, is this deeper than color?"

SZA is no stranger to Internet hate; her authenticity and her blackness have continuously been called into question since her debut. She's been accused of drawing on her distinctive freckles, making up her Orthodox Muslim upbringing and allegedly lying about attending an Ivy League college to major in marine biology. It seems, as exciting an artist as she is, her realness has often been under scrutiny.

In the back-and-forth dialogue between SZA and her critics that followed, there were numerous accusations that the singer was a New Black sellout, neglecting her blackness in order to placate a burgeoning white fan base. Things, of course, get lost in translation. In her initial statements SZA seemed to be at the very least rightly criticizing the use of military power in a situation already sparked by needless violence, but much like actress and talk show host Keke Palmer's own social-media rant on the situation, she contradicted herself even as she sought to clarify.

SZA acknowledged the role of racism in her own life, claiming to have been called a nigger on several occasions as well as citing incidents of bricks being thrown through her father's mosque windows. Yet she also used the black-on-black crime argument, pointing out the "children dying all over the world and black ppl killing black ppl RIGHT NOW." Her statements are despite the fact that up until Brown's death, the 70 percent black town of Ferguson had seen no murders this year. 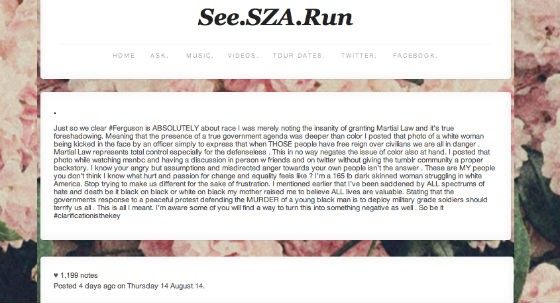 In her final comment a Tumblr post, she backtracked, but stumbled, conceding that the situation in Ferguson was "absolutely" racial but asking her critics to stop seeing race: "Stop trying to make us different for the sake of frustration. I mentioned earlier that I've been saddened by ALL spectrums of hate and death be it black on black or white on black my mother raised me to believe ALL lives are valuable... I'm aware some of you will find a way to turn this into something negative as well. So be it."

Just so we clear #Ferguson is ABSOLUTELY about race I was merely noting the insanity of granting Martial Law and it's true foreshadowing.

Ain't nobody ever said we can't hurt that we can't fight for change. We don't have to treat EACH OTHER like fuckin dogs n the street. My God

Elsewhere in social-media land, artists Jhene Aiko and Childish Gambino were also getting branded as New Blacks for their opinions on Ferguson. Aiko urged protesters to "pray for your enemy" while Gambino wrote a strange Twitter poem dismissing hashtag activism. Of course, the situation in Ferguson has, for the better, prompted many black artists to speak out -- John Legend has been especially outspoken via his own Twitter while rapper J. Cole recently traveled down to Ferguson to join in the protests.

What's most interesting about these artist-fan exchanges is how passionately and vehemently fans react to artists who apparently fall in line with a kind of "we all bleed red" or "I don't see color" post-racial ideology that derails conversations about racism rather than contributing to them.

In a way, it's as if they feel lied to when an artist is conceived of as one "kind of black" -- conscious, deep, political -- and disappointed by seeming to be the opposite. In most of these cases, though, it's the myth of authenticity, the very myth that there can be any kind of right "blackness," that causes the confusion. Should SZA have anticipated the backlash and online hate she received for sharing her feelings on the tragedy? Probably. But the question also remains: Should the fans have been all that surprised?