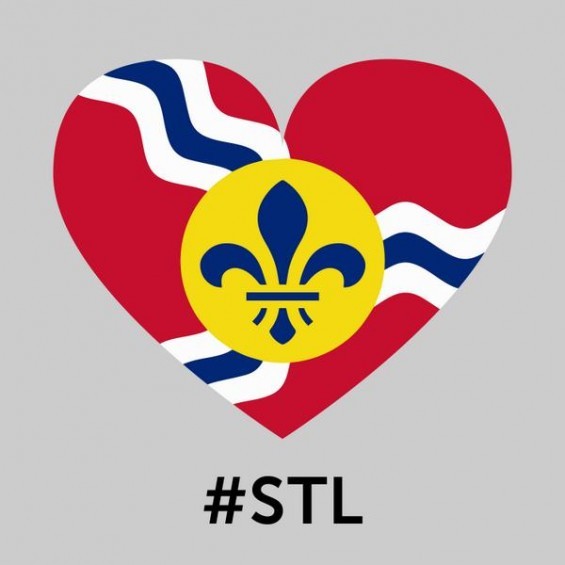 In the week and a half since Ferguson police officer Darren Wilson shot and killed Michael Brown, national attention has been turned on Ferguson, and it looks like it may stay that way for quite awhile. Brown's family is coping with loss, Wilson's actions are being investigated, protesters are marching nightly through Ferguson and militarized police are trying to deal with rioters and looters.

Law enforcement's peacekeeping efforts and handling of Brown's case, in particular, have been been sticking points for many people, including rapper J Cole, who visited Ferguson on August 17 and released the song "Be Free" in honor of Brown.

"Rest in Peace to Michael Brown and to every young black man murdered in America, whether by the hands of white or black. I pray that one day the world will be filled with peace and rid of injustice. Only then will we all Be Free," Cole says on his SoundCloud page.

Many St. Louisans are following Cole's example and creating songs, films, visual art and poems that express how they feel about Brown and the unrest in Ferguson. No matter what form the art takes, the creators tell RFT Music that they hope their work can heal or inform during this difficult time.

Chuck Crittenden, guitarist in the indie-folk band Arthur and the Librarian, has been collecting audio from protests in Ferguson, putting natural sound clips with a few tones together to form a story.

"This past week I've gotten the privilege to meet some awesome people in Ferguson," Crittenden says. "I've watched a community gather as one to mourn the loss of one of their own. Whether it was marching, chanting, praying, yelling, creating art, sharing stories, I've watched citizens express their grief through many ways. I've watched children chant for their future. I've watched a hundred people gather around a drum set and release their energy as one.

"It is immensely powerful and inspiring to watch as so many people come together with a chance to let their frustrations and emotions out," Crittenden adds.

"We lost another brother to a senseless act of violence," Souls of Liberty says on its SoundCloud page. "The national spotlight has been put on our hometown, and we must speak out! Whether it's black on black or police brutality, killing unarmed black men must stop! We urge everybody to keep fighting in the name of justice."

Rock band Shotgun Abby's song "Won't Go On" was originally about depression and suicide. But vocalist Shawn Telkamp tells RFT Music that he altered the lyrics after Brown's death, and the band debuted the new version on August 14 during the City of Night festival at Foam.

Rapper Dooie Dollaz felt compelled to record a song not only about Brown, but also about how he felt after his shop, Rite Connections, on New Halls Ferry Road was looted last week.

"I was very hurt by my own people's actions," the rapper explains to us. "I, myself, am an African American business owner in the Dellwood and Ferguson area."

Phillip Johnson is a local filmmaker who is crafting a documentary series about Ferguson. Through a string of short films, Johnson's goal has been "to capture the moment as organically as possible."

"My first question that I asked folks was, 'What brought you here?'" Johnson tells RFT Music. "One of the answers from a young black man was, 'It could have been me.' The shooting of Michael Brown generated many emotions, remembrances, thoughts, so it was my hope to capture as much of that as possible. Going forward the series will pivot towards healing and understanding."

#Ferguson from Stlfilmmaker on Vimeo.

See visual art and poems about Brown and Ferguson on page two.

Resident Patrick Milford designed a graphic based upon the St. Louis flag to reflect his feelings on what's been happening in Ferguson, hoping supporters will use his graphic any way they see fit, including on social media.

"I remember watching a live stream of the Mike Brown protests Wednesday night," Milford tells RFT Music. "When the police responded with military-grade force on the (mostly) peaceful crowd, I felt incredibly helpless about the whole situation. The next day, I decided to create this graphic to express how I felt."

"St. Louis often gets a bad rap from outsiders. Clearly, our city is not perfect. Far from it," Milford adds. "This is my way of saying that I love and support this city, even in light of recent events. The Brown family, Ferguson and St. Louis need our support now more than ever."

Humans of St. Louis has been publishing its insightful, character-driven photography since May, but the group recently shifted its focus to bring attention to those in Ferguson.

"I have been saddened by the whole chain of events that has occurred," Gold shares. "Ferguson is a fine community, and I hope and pray that a peaceful and just resolution can be found."

Linda Austin, an author who specializes in writing about family and community legacy, responded to our request with a poem she had posted after watching events unfold.

Chelsea Embree is a St. Louis native currently living in Idaho. "I can't stop thinking about the situation," Embree tells us, explaining why she had written several poems about Brown and Ferguson on her Tumblr.

My heart goes out to as in this thing, which weighs a ton, these days, seeks

out, seeks home across the country, like it's pushing from within because of pulling. Half-awake, I drew

maps on my hands, forearms, tattooed them over half of my head as if I was afraid of forgetting. In St. Louis, could still

drive there without the windows--paint them black. Would arrive safely, of course, because this has been guaranteed to me. My heart

goes out to means please, take it. Means easier to let it than to be contained. I belong in the city that's mourning, as though belonging were mourning with them, as though that were enough. Conditional conjugations only

make sense in Spanish. Here--there--the language is hands in the air.