[Note: The situation in Ferguson is as such that even lowly music journalists such as myself have felt compelled to report on the scene -- I wrote this article, which was published Wednesday -- despite having more experience with things like Ra Ra Riot than real-life riots. In keeping, I am an idiot who probably has no business being on the ground, and who should probably be leaving this work to RFT's actual news reporters, whose work has been simply astounding. I offer this article as my case in point. Hopefully it can bring a small amount of much-needed levity and laughter to a city in the midst of a terrible situation. This story occurred on Wednesday night, before the St. Louis County force was replaced by the decidedly less-militarized state troopers. Enjoy.]

At approximately 9:30 p.m. Wednesday night, after hitting several police roadblocks around the site of the protesting in Ferguson, I finally found a way to drive into the fray, popping out just behind the line where police were turning away cars. I parked on a residential street that runs perpendicular to W. Florissant, and the first thing I saw was an armored personnel vehicle 40 yards away from my position, loaded with cops dressed in all their military finery. Nearby, I watched other police officers dropping smoke flares on the ground and turning away cars that were coming through. One of the full-riot-gear police stood in the middle of the street, holding a shotgun and telling vehicles and pedestrians alike to turn around and go the other way. Overhead, a police helicopter repeatedly shined a spotlight on pedestrians including myself, flashing it to indicate further that we should leave, and just south of my location police had begun deploying rubber bullets, flash grenades, tear gas and sound cannons.

In awe of the scene, I stepped slowly out of my car and shut the door, distracted and neglecting to realize I had left my keys sitting on the passenger seat. I figured it out two seconds after the door closed, as is often the case in these matters.

For a moment I wondered if I should smash out my own window to regain access, as I was in a dangerous situation and wanted to be able to flee the scene quickly if necessary, but I immediately dismissed that idea when I remembered that I was in plain sight of a police force armed with various painful means of crowd control, in the middle of an area filled with civil unrest. 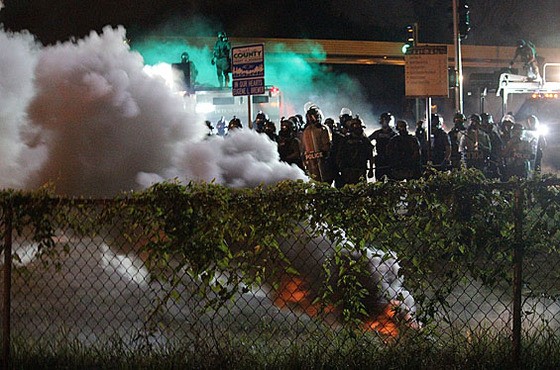 So I began walking up and down West Florissant with no plan whatsoever. As I traveled southbound, I was approached by a police car, whose occupants told me to turn around and go back. I explained that I was with the press and that I cannot leave; I had locked my keys in my car, and could one of them perhaps grab a slim jim and help me get inside? The driver told me that they had more important things to do, but the passenger said, "I'll help him."

So with police escort, I walked back toward my car. As we got close, I pulled out my camera phone to take a picture of the armored vehicle, much to the chagrin of the officer who had volunteered to assist me. "Put that away," he said. "I didn't bring you over here to take pictures."

Irritated, he then he asked me about my credentials. "You're media? Do you have a card or something?" I produced one of my business cards, which identify my title as "Music Editor / Free Lunch Fishbowl Raffle Champion" with the RFT. He handed it back to me immediately. "You're not media; you're out here on your own." I replied, "Well, I am with the Riverfront Times." He said, "That is not a real media source." I shrugged.

Then he said he was not going to help me, and began walking away, saying, "You got yourself into this situation." I replied that I know that, but that now all I want to do is get myself out of it, and I will gladly leave if he will just get me into my car.

He asked, "How do I even know this is your car?" He shined a flashlight inside, and asked me how many keys I had on my keyring.

Unsure, I began describing the keys. "There are two house keys on there with rubber covers. One is red and one is green." He turned his flashlight off, shaking his head. I, on top of being a general moron, am also (legitimately) colorblind, and had misidentified one of my own keys.

"Nope," he said, and start walking away again.

"What do I have to do to prove to you that this is my car?" I asked. "I can describe stuff in there. There is a Black Lips CD on the console and a motorcycle helmet in the back." He was not impressed, as anyone could have glanced in and seen those things.

This exchange went on for five to ten minutes as explosions and gunshots and helicopters could be heard just south of our location. Finally he asked me what was in my trunk.

The only thing that I could remember specifically that is in there is a large chunk of plastic that had been a part of the rental van Drew Ailes and I had driven last year when we reported on the Gathering of the Juggalos. It had been ripped off the bottom of the van when I accidentally ran over a ladder in the street near the event, and for no particular good reason I had saved it. I described it to the officer.

"If your story doesn't check out, I'm not giving you those keys," he warned. I told him that was fine, he got into the car, popped the trunk, and then handed them to me, satisfied. "Now get the hell out of here, now," he said sternly. I thanked him and immediately complied.

So the moral of the story is: Thank god for the Gathering of the Juggalos, as well as my apparent hoarding tendencies that caused for me to not throw this seemingly worthless piece of garbage away. And also, there is apparently no end to how braindead stupid I can be sometimes, though I like to think of that as part of my charm.

Luckily for all of us, RFT staff writers Danny Wicentowski and Ray Downs, two intelligent individuals still in possession of their keys, were still out there in the thick of things, doing the Lord's work. They'd been fearlessly going down to report day after day, ducking rubber bullets and inhaling tear gas along with the protesters, and they'll continue to do so as long as this story plays out. Please stay safe out there guys, and don't be complete inept buffoons like I am. Let this be a cautionary tale.

Check out Daily RFT's complete coverage of the event here.